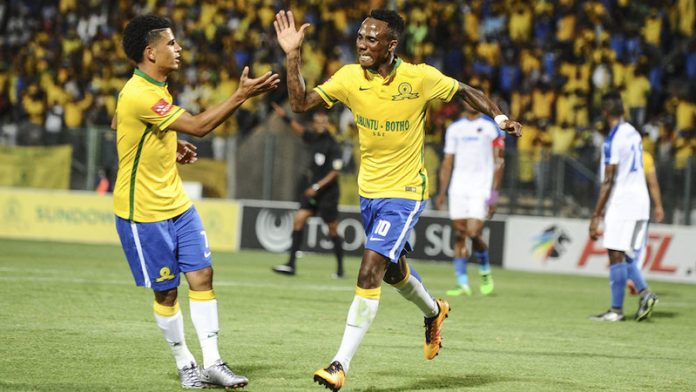 Mamelodi Sundowns have opened up a five-point lead at the top of the Premier Soccer League and are threatening to turn what promised to be a tight tussle for the title into a runaway success.

There might still be 13 rounds to play and forecasting remains risky, with many twists and turns still lying ahead, but it is also hard to see if, and how, anyone can stop them.

Sundowns have not lost in their past 17 matches, fast approaching a club record, and look a distinct cut above the rest of the league.

Besides poor finishing, they do everything better than everyone else with, finally, all of that talent being properly harnessed.

They press cleverly and with high intensity, they stretch defences at the right time to bring their midfield into scoring positions, and the way Keagan Dolly and Khama Billiat put in as much effort these days in tracking back and sandwiching opponents as they do in running at the opposing defence makes it so much more of a complete performance. In recent weeks they have emerged a distinct cut above the rest.

Sundowns put in extensive fitness work in their preseason preparations and are reaping the rewards, peaking perfectly at a crucial juncture of the campaign.

They must now get over the hurdle that participation in the African Champions League will present. The competition is a distraction and a taxing exertion, and can trip up the best-laid plans.

Sundowns want to do well in the continental competition, but there must now also be the temptation to hold back their best resources to ensure they win the PSL championship.

Previous plans for an expansive squad to be able to compete equally on all fronts never panned out and coach Pitso Mosimane is not one for rotation either. He keeps a consistent selection, changing only for injury, suspension and the occasional loss of form.

Traditional rivals Kaizer Chiefs and Orlando Pirates are substantially off the pace, not coping well under pressure and in varying states of flux.

Bidvest Wits are the best bet to keep pace with Sundowns, but are remarkably inconsistent.

Wits coach Gavin Hunt said recently: “We are a club that doesn’t have a winning culture. We need to create that culture. The last two seasons we have amassed a record number of points for the club and had our best-ever finishes in the league, but we won nothing.”

Wits have let slip the pressure on Sundowns with examples of the inconsistency that has dogged them over the past two campaigns. Their past two games have seen them lose in Bloemfontein and be held at home by Platinum Stars, dropping potentially precious points.

Where they do have some potential for later in the campaign is in their diverse approach to the game and their ability to mix up tactics and personnel.

Sundowns, in contrast, lack that flexibility, although they are playing so well at the moment it makes little difference.