The long wait for service delivery in Mabopane 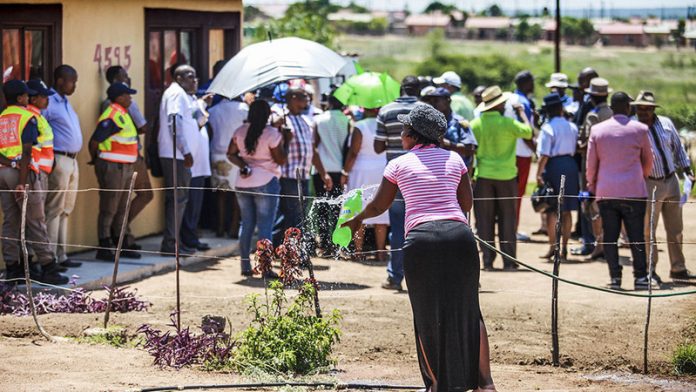 The most pressing issue is the sun. Here, in Mabopane, a township 50km north of Pretoria, the highveld sun is unrelenting. The half-collapsed sweet stalls have people queueing up to gain respite. Only the presence of the two uniformed police members, tucked in behind a sliver of shade, suggests the coming parade of Gauteng Premier David Makhura.

A man in a Kaizer Chiefs T-shirt with car-washing rags at his feet listlessly notes the sudden commotion. More police officers arrive, ushering taxis out of the way as the premier’s motorcade makes its way through the everyday bustle.

Makhura is here for a site visit in the area to follow up on service delivery issues residents raised last year as part of a partnership between the Gauteng provincial government and the Tshwane mayoral office, known as the Ntirhisano Community Outreach project. The project is meant to strengthen ties and communication between citizens in need and government officials, and Wednesday was day one of an inspection into the progress that had been made.

In the shade the conversation turns to an assessment of service delivery.

“Service is very poor. RDP is not safe. They don’t build them properly. I see the toilet is just for them to build a toilet. After two weeks, you have to fix it. RDP you have to fix it,” says 21-year-old Nercia Ntuli, who has just emerged from the nearby station.

Ntuli moved into her RDP home when she was nine years old. There are 14 members of her family living in the house, but she acknowledges that her current living arrangement is much better than when she was younger.

Carwash David (he didn’t want to give his surname) has few qualms about service delivery in Mabopane and is now waiting for his RDP home. He is happy that more houses are being built in his area, which is a vital measure of the improvement in service delivery in the township. Although he believes the construction of the homes is poor, with, he suggests, developers taking short-cuts to get the houses up quickly and affordably, he expects that a government-subsidised home would not be of the greatest quality and has no issues with that.

“We are not buying it, so it’s right, but when we buy it, it’s not right. It’s right for us because it’s mahala [free], but if I buy it then the quality must be better,” Hlongwa says.

The poor construction of the toilets and the houses makes Ntuli angry, but the lack of job opportunities at her youthful age is just as bitter to swallow.

“You call somebody and if I know you, they’ll say, ‘my friend, come and work’,” she says.

Ntuli puts the job crisis squarely at the feet of the ANC, who she says has failed to live up to promises to create jobs, but her friend, Lorraine Maleho (24), has found a more vulnerable target. “Some of us, we are not working. The most people who is working is the foreigner and we are tired about foreigners,” Maleho says.

According to Maleho, people from other countries accept jobs earning scant pay, but she has put her foot down and wants to earn a living wage to put her children through crèche and to be able to put food on the table.

For others, drugs and the continuing spectre of the HIV pandemic is a social ill that hasn’t been sufficiently addressed.

“When he is affected with HIV, he’s starting to smoke [nyaope]; they say his life is gone,” David says.

When Makhura finally arrives, he is taken on a tour of the Mabopane train station, which is undergoing expansive renovations to better accommodate people in Mabopane, Soshanguve and other townships that rely on the station. On two pillars at the construction site, remnants of art still remain, advertising a hair salon that was once nearby.

Makhuru sweeps through the building before stopping at the metro police regional office for lunch. He then goes on to meet Bethuel Letswedt (47), the proud owner of a new RDP home in Winterveldt, a township neighbouring Mabopane.

“I’ve been waiting for a house for close to 16 years. I’m happy now I have a house,” says Letswedt, just after Makhura hands him the keys.

The day continues with the Gauteng premier, along with the mayor of Tshwane, Kgosientso Ramokgopa, visiting more sites and attending a public meeting in Winterveldt. Wednesday was just day one, but the visits will continue on Thursday.

Despite the problems Mabopane residents still face, many predict that the ANC will claim victory in the local elections. For youngsters, it comes from parental pressure or because they see no alternative party. The older generations hold on to the memory of the ANC.

“We are supporting ANC all over here. ANC gave us freedom. Remember when Mandela came out of the prison? Today we are together,” says David.