The battle for the soul of the National Prosecuting Authority (NPA) has reached a tipping point following the devastating affidavit delivered by the deputy national director of public prosecutions, Willie Hofmeyr.

Hofmeyr has in effect accused his new boss at the NPA, Shaun Abrahams, of lying under oath and “misleading” the court in a bid to protect the controversial but powerful Nomgcobo Jiba, his other deputy.

The Democratic Alliance last year launched a Cape Town high court bid to get Jiba suspended pending an official commission of inquiry into her conduct.

Jiba was roundly criticised by judges in three separate cases during her tenure as acting prosecutions head – all of them politically sensitive – leading to accusations that she was protecting President Jacob Zuma or his allies.

Following Mxolisi Nxasana’s appointment as national director of public prosecutions in October 2013, he clashed with Jiba and referred her conduct in the same matters to the General Council of the Bar.

Nxasana also laid criminal charges of perjury, flowing from statements she made under oath in the course of attempting to prosecute KwaZulu-Natal Hawks boss Johan Booysen under the Prevention of Organised Crime Act.

In what was widely perceived as a demonstration of his support for Jiba, Zuma ignored Nxasana’s petitions for her suspension and instead instituted an inquiry into Nxasana’s fitness to hold office, before paying him out R17-million to leave.

When Zuma appointed Abrahams as prosecutions head in June last year, the new NPA boss rapidly moved to entrench Jiba’s position, announcing the withdrawal of perjury charges against her and placing her in overall charge of prosecution services, and moving Hofmeyr to the backwater of the legal affairs division.

Abrahams also went in to bat for Zuma and Jiba in the DA application, characterising the attempts to have her suspended and investigated as part of a politically inspired “vendetta and a stratagem to get rid of [her]”.

Hofmeyr has now weighed in, delivering an affidavit and supporting evidence that contradict Abrahams’s version in material respects.

Crucially, Nxasana has also entered the fray in support of Hofmeyr, accusing Abrahams of “viciously attacking” him and defending his own moves against Jiba.

Nxasana notes: “I could not fold my arms and do nothing in light of the scathing judicial criticisms.”

Hofmeyr delivers several heavy blows, but the most devastating for Abrahams relates to the withdrawal of perjury charges against Jiba. 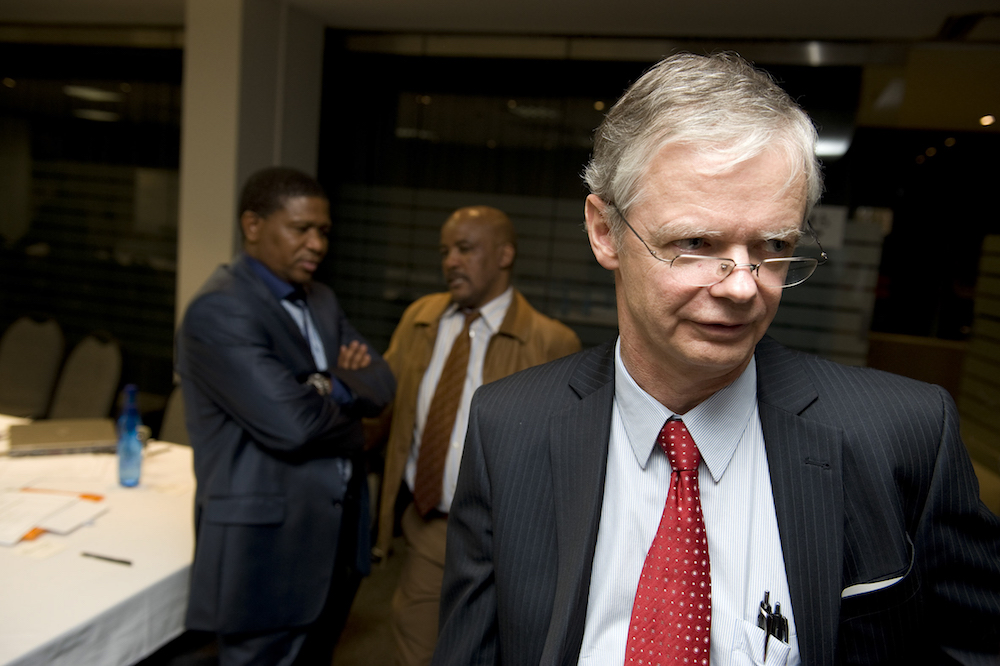 In his first press conference following his appointment, Abrahams attempted to characterise the exculpation of Jiba as the decision of one of his juniors, advocate Marshall Mokgatlhe, the regional head of the Specialised Commercial Crime Unit, which was prosecuting Jiba.

In his public statement, Abrahams confirmed requesting the prosecuting team, led by advocate Jan Ferreira, to provide him with a legal opinion on the prosecution at the conclusion of the investigation.

“Prior to me receiving the aforementioned opinion, on 13 August 2015 I requested … Adv Mokgatlhe to provide me with his decision as the regional head of that office, accompanied by an opinion.”

Attempts to get Abrahams to answer questions about these two opinions were stonewalled by his office.

All that was forthcoming was a letter from Mokgatlhe dated August??17 in which he argued, implausibly, that the Act that Jiba had used to charge Booysen indemnified her, because it excluded liability of any actions taken “in good faith”.

Now Hofmeyr has disclosed the opinion delivered by advocate Ferreira, in which he stoutly defends the decision to prosecute Jiba.

Ferreira writes: “In this matter it is vital to note that when deciding to prosecute Major General Booysen, the then acting [national director of public prosecutions] Ms Jiba had to take cognisance of the fact that the decision to prosecute Booysen may affect him, his family, the victims, law enforcement agencies and the public. She was required to act fairly towards the accused …

“It is safe to say that there was pressure on Ms Jiba to prosecute Booysen. He was subsequently suspended by the [South African Police Service]. He was a vital witness against one Madoe and Panday, people with political influence. Mr Nazeer Cassim SC indeed found that there was an agenda on the side of the SAPS to get rid of Booysen …”

Ferreira found that Jiba committed perjury by stating under oath that she was in possession of evidence implicating Booysen, as required by the Act, when she did not – and he disposed of the question of “good faith”.

“As to the original decision [to prosecute Booysen] … Ms Jiba may perhaps have acted on the advice of her team and may not have carefully looked at the statements and evidence herself; however, when she [later] deposed to an affidavit [after Booysen challenged the decision] … she didn’t rely on such a possible defence and clearly stated that she personally gave due and careful consideration to the evidence.”

Damningly, the memo is addressed to Abrahams and dated August??5, a week before he approached Mokgatlhe. Worse still, Hofmeyr attaches an August 17 email exchange between Ferreira and Mokgatlhe, which makes it clear that they both expected Abrahams to make the decision about continuing the prosecution.

Ferreira writes: “Dear Marshall, any news regarding the docket (and opinion) that was forwarded to the [national director]?”

On the same day of his purported “decision”, Mokgatlhe writes back: “Dear Jan, I am still waiting for the decision. [The national director] was meeting with all the [prosecutions directors] from this morning and the meeting is still on. Hopefully [a] decision will be taken this afternoon or tomorrow morning.”

The NPA has declined to respond to media queries about Hofmeyr’s affidavit.

Hofmeyr and Nxasana deny there was any vendetta against Jiba.

“Mr Nxasana made a sincere effort to find truth and understand what had happened. He requested reports from all those affected. They all provided him with reports, except for Ms Jiba, who refused to respond,” Hofmeyr writes.

“There was no conspiracy to bring down Ms Jiba … Nxasana could not just fold his hands and be supine in his response to the judicial criticism of Ms Jiba. He took steps after careful consideration of the merits of the criticisms to ensure these were fully investigated by the appropriate authorities – the SAPS, the [General Council of the Bar] and the president – so as to give them opportunity to take appropriate action.”

Conversely, Hofmeyr accuses Jiba of engaging in a conspiracy to undermine Nxasana and attaches an affidavit from controversial NPA security official Terence Joubert to back up his claims.

Joubert, who is himself dogged by old allegations relating to an NPA security tender, is regarded as being close to another Jiba ally, national Specialised Commercial Crime Unit director Lawrence Mrwebi.

His affidavit, from November 2013, is also potentially damaging to Jiba. In it Joubert tells of how Nxasana was investigated, allegedly prompted by Jiba and aimed at bringing about his removal from office.

“I then told him that this would be playing with fire as we are only small fries and when elephants fight, the grass suffers.”

Joubert states that a colleague, Colonel WS Mhlongo, had come to him shortly after a meeting with Jiba in September 2013 “and told me that the new guy [Nxasana] does not like Adv Jiba and Adv Mrwebi …

“I asked why he thought so, and he said that he was sent by Jiba, as she is convinced that this guy is not the right person for the job and that we should try and find something on him …

“I then told him that this would be playing with fire as we are only small fries and when elephants fight the grass suffers, was my comment to his suggestion. Col Mhlongo assured me that their efforts would not be in vain as Jiba had said if this man [Nxasana] is removed, then she would be appointed again.”

Although Joubert’s credibility is questionable owing to his own history at the NPA, Hofmeyr has tendered a copy of a recording of the conversation between Mhlongo and Joubert, which Joubert provided to Nxasana.

Hofmeyr adds: “The attempts by Ms Jiba to engage in activities that are in support of political groupings is not new. In my affidavit in the DA application to review the decision to drop the charges against Mr Zuma, I dealt extensively with the unethical role played by Ms Jiba in the Selebi prosecution to try to assist those close to then-president Mbeki, as well as the subsequent disciplinary action taken against her.”

Jiba was part of the efforts by a faction in the NPA to stymie the prosecution of Jackie Selebi, then national police commissioner, and have criminal charges brought against Gerrie Nel, the prosecutor in the case.

In that process Jiba acted in concert with Mrwebi, with then crime intelligence boss Richard Mdluli and with the NPA’s integrity management unit head at the time, Prince Mokotedi.

Jiba was charged internally by the NPA, but the case was dropped, seemingly as part of an accommodation of the Zuma faction.

The ongoing DA bid to have Zuma recharged, the continuing battle around Mdluli, the recent appointment of Mokotedi as the head of the Hawks in Gauteng – one of a host of controversial appointments in the criminal justice sector – and the extreme efforts to keep Booysen from going back to his job: all these indicate how wide the fallout from the Jiba saga is – and how high the stakes are in Hofmeyr’s gambit.