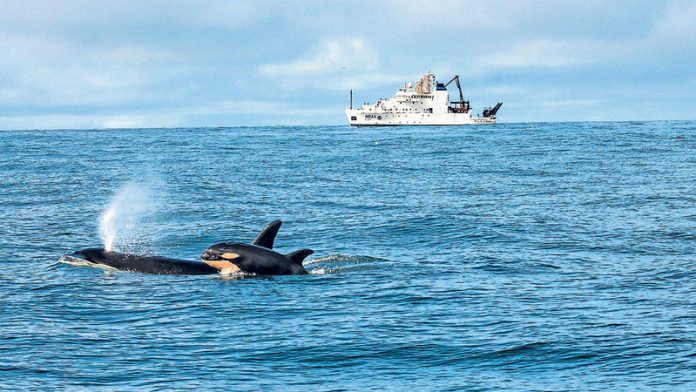 “Motor engines spell death for young fish.” After a year of research, Exeter University’s Steve Simpson felt qualified to speak bluntly last weekend when he released his team’s findings on the effect of engine noises on fish.

His multinational team did its research on young ambon damsel fish living around Australia’s Great Barrier Reef. The number of boats with engines has proliferated there, thanks to the tourist industry ad more recreational users. The team found engines inhibit the damsel-fish’s ability to evade their natural predators – dusky dottybacks.

The research, published this month in the journal Nature Communications, is the first to examine the effect of actual engines (previous research used recorded noise). It found that engine noises stress fish. As a result, damselfish are six times more likely to “startle” when a predator approaches. Their reaction is 22% slower than when there is no engine noise.

Simpson said this gives predators a serious advantage. “It can cause fish to respond in the wrong ways [to attacks]. If you think of people, when we are stressed we often do crazy things.”

Dusky dottybacks are found to be twice as likely to catch damselfish if there is engine noise in the vicinity.

The researchers have proposed that two-stroke engines are banned from some areas of the ocean.

Mark Meekan, of the Australian Institute for Marine Science and one of the team, said: “If we can reduce the effect of local noise pollution, we can build greater resilience in reef communities to looming threats such as global warming.”

Killer whales and dolphins
That finding echoes the results of research published last week, looking at the effect ships have on killer whales and dolphins. The study, Ship Noise Extends to Frequencies Used for Echolocation by Endangered Killer Whales, was published in the journal PeerJ, following two years of research along the United States’s west coast. Here, an endangered population of 84 killer whales lives in busy shipping lanes. This means whales and similar large predators such as dolphins are constantly bombarded by high-frequency noise.

The research team found that the average noise coming off ships is equivalent to 111 decibels through the air – the same noise a rock concert produces. That interferes with the whales’ echolocation and communication, which use the same frequency. “Hearing a click off a salmon [their staple food] is probably the most challenging thing a killer whale does,” said research leader Scott Veirs. “Hearing that is harder if there’s a lot of noise around you.”

Consequently, whales are finding it increasingly hard to locate food.

The researchers also found that they swim closer together to communicate, making it easier for prey to spot them.

Less food also means a greater reliance on their blubber, which other research has shown is growing increasingly toxic because of human pollution of the oceans.

Millions depend on the Western Indian Ocean, but it is warming fast
Read more
Environment