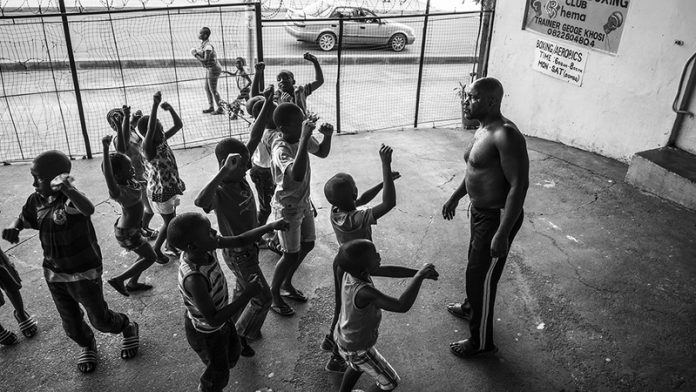 There’s a champion moving among God’s people, fighting the demons that have lingered since his childhood as a street kid.

The demons are people’s misconceptions. “We black men are seen as criminals and any woman walking on the street is seen as a prostitute. That’s what people think when they think of Hillbrow, but it’s not true – these are God’s people,” says 45-year-old George Khosi.

Growing up on the streets of Hillbrow, scrounging for scraps, Khosi picked up boxing, a sport he found he had a natural flair for.

Twenty years ago the amateur boxing champion’s career was cut short after an attack left three bullets in his legs and another bullet just missing his right eye. His attackers left him for dead, throwing his limp body down four storeys.  Thwack. Thwack-thwack. Thwack.

Today, in the outdoor boxing arena on Claim Street, Khosi holds up his mitts as kids pummel away at them. Training the youngsters and young professionals is crucial to preparing them for life’s battles.

“At 3am I wake up and pray … I pray in the spirit; this is my fight. I can’t fight like I used to in the physical [sense], but now I fight in the spirit – I fight demons.”

Recently, Khosi discovered that he’s the father of a 20-year-old son. He’s spoken to the young man and soon, he says, his son will be joining him to live among “God’s people”.

“During the robbery, while lying there, something told me it’s not over for my life, and surely it wasn’t. I believe when you do the right thing, there’s just no way everything in your life will be easy or smooth. You will have challenges.”