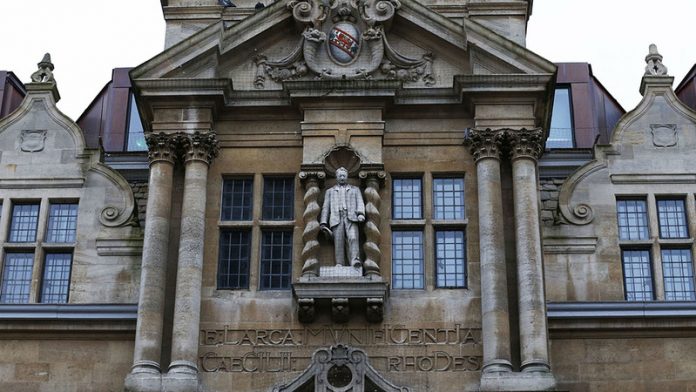 James Delingpole, an Oxford University graduate, recently castigated black students at Oxford who called for the removal of the statue of Cecil Rhodes from Oriel College, pointing to Oxford’s status as one of the most venerable in the world.

This breathtaking racist arrogance is an astounding example of the assumption of superiority that, until the end of the 20th century, dominated the thinking of most citizens of what is referred to as the Western world. Since the 1990s this European perspective, assuming the pre-eminence of European culture, beliefs and practices, became known as Eurocentrism, a term coined by French-educated Egyptian economist Samir Amin.

History shows that prejudicial “othering” of “non-Europeans” leads to the diminishing of others, eventually dehumanising them. This led to the conquest of vast tracts of land: Asia, Africa, the Americas, the Pacific Islands and Australasia, whose natural riches and indigenous people could be exploited and manipulated for the apparent wellbeing of civilised Western nations.

It was the motivation of many 18th-century Christian missionary societies who embarked on campaigns in countries such as India, parts of Africa, Egypt, China and the Americas to educate and bring salvation to “unbelievers” and “pagans”.

This attitude – despite the benefits brought in the way of literacy and education, and eventually to the recognition of universal human rights – centres on the assertion that the Christian faith contains ultimate, incontrovertible truth, an intolerance negating the validity of all other worldviews. It ignored these peoples’ belief systems and cultural values.

But some, such as Bishop of Natal John Colenso (1853), a theologian ahead of his time, were exceptions, doubting the validity of these assumptions. Colenso questioned the doctrine of eternal punishment as “utterly contrary to the whole spirit of the gospel”. He said he was unable to teach “to intelligent adult natives” the belief in everlasting torment after death for unbelievers. For this, Colenso was branded a heretic by fellow Christians.

Towards an appreciation of all faiths
This exclusivity originated with Roman emperor Theodosius (c346-395CE), who proclaimed Christianity the official state religion, banning all other forms of worship.

The Crusaders set out ostensibly to rescue from the “infidel” what Christians claimed as the land holy exclusively to their faith – disregarding Muslims, Turks, Arabs, and Jews. It perpetuated the intolerant dismissal of what others held sacred, a trend for distrust and divisiveness maintained through the centuries, with tragic contemporary consequences.

The academic comparative study of religion, commencing from the end of the 19th century with the work of orientalist Max Muller, introduced the study and comparison of all religious systems, attempting to create greater understanding of human beliefs and practices.

Later developments by scholars such as Mircea Eliade, Geoffrey Parrinder and Ninian Smart contributed a more objective study of facts and an empathetic appreciation of the faith of others.

To build a more pluralistic, peaceful world, denunciations of what others hold sacred and assertions of superiority must be avoided. We need to be humble enough to admit that the “truth” is far greater than any one mind or group can grasp, cultivating respect for the contributions of others, extracting the best from the past, creating inclusivity, flexibility in our attitudes, transcending race, religion and gender, encouraging all that promotes the wellbeing of our planet.

Alleyn Diesel has a PhD in religious studies from the University of Natal.