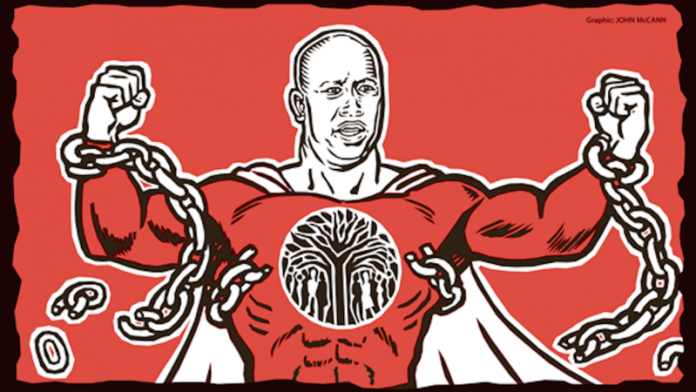 Though this week’s Constitutional Court judgment on President Jacob Zuma’s financial culpability for the nonsecurity features of his Nkandla home is yet to be pronounced, the Economic Freedom Fighters seized the role of pacesetter in opposition politics in South Africa, turning into the latest – and potentially most forceful – champion for constitutionalism and constitutional democracy, and a warrior for legislative and executive accountability.

More generally, the EFF has been setting the pace and tone of South Africa’s party politics since its election to Parliament less than two years ago. Beyond the fiascos triggered by Zuma and ANC members themselves, there is hardly a party political development that has not been EFF-driven.

Julius Malema’s party already held the status of speaking truth to power most loudly, especially since parliamentarians fell silent and sycophants spun presidential praises and tried to weave a protective web around Zuma.

It had already pushed the ANC into repackaging policies that were not as “radical” as required when challenged and is single-handedly responsible for the ANC of 2015 and the first two months of 2016 reassuring its supporters that it is indeed a “radical” party.

The EFF does not just excel at party political theatre. In its own style, and often under a cloud of criticism, it has started building a new era of South African politics. In the process, it has also subjected itself to change.

The EFF’s national leadership has honed its ability to put its finger on the exact presidential misdemeanours and weaknesses that cause national (and ANC) embarrassment. It is exceptional at coining campaigns that breathe the anger that South Africans across their demographic and party political boundaries feel at the Zumaist occupation of the ANC.

In Parliament the EFF has been consistent in its attacks around #PayBackTheMoney. It has taken the rap for outrageous behaviour on the floor of the House, but only in terms of challenging and disruptive interventions, not for the substance of its objections. Occasionally other opposition parties, and in particular the Democratic Alliance, registered their objections about Parliament’s failure to get on with its work.

But the EFF had its eye fixed on exposing the president for corruption and cronyism. #ZumaMustFall is the next target and the president himself delivered the ammunition to the EFF’s doorstep.

As the 5?000 or so red berets chanted outside the court, the EFF’s counsel built the legal side of the party’s arguments, but used in a different way to those of the parliamentary attacks of the last two years.

In Parliament, the EFF’s 6% of representatives is dwarfed by the ANC’s 62%. The DA rallied occasionally, when it did not have to be seen to be more “constructive” than the EFF in order to please its conservative electoral following.

In this era of Zumaism, the throne of constitutional crusader cannot be shared by the EFF and the ANC – the title became available after the ANC’s apparent abdication.

The ANC has been coming across as the enemy of constitutionalism in the era that ended this week at Constitution Hill. (Given that it is this “delicate time [euphemism of the year] in a dangerous year”, in the words of Zuma’s counsel Jeremy Gauntlett SC, the ANC might still have to change its spots again.)

In his January 8 anniversary statement, Zuma had lamented the EFF and the DA relying on recourse to the courts to stop the ANC from embarking on some government and policy actions. Zuma suggested that such actions are responsible for the ANC not having achieved more in its 22 years in power.

Part of this ANC objection has been that the two main opposition parties have been using recourse to the courts to undermine the ANC’s majoritarian right to govern.

In this process the ANC presented itself, de facto, as anti-Constitution. In the same way, the ANC has been arguing that it is the compromised political settlement of 1994 that had forced it to do less than it would have been able to had it been permitted to govern in an “unconstrained”, a more liberated, way.

No mea culpa here. The ANC, proclaiming itself as devoid of agency but at the forefront of an ongoing liberation struggle, also places the blame for the deficits in the country today in the laps of the colonialists, racists and capitalists.

Of course, the EFF also laments the compromises of the 1994 settlement, but it has pointed out how the ANC’s own agency in matters of policy and governance (and corruption and cronyism) had contributed massively to the ANC’s suboptimal performance.

The EFF thus broke new ground on Tuesday. It has become the champion of the Constitution and the 1994-1996 dispensation’s chapter nine institutions, especially (for the present) the public protector.

If the attention to oversight, accountability and conditional separation of powers bears fruit and the Constitutional Court affirms these principles, Malema, along with the DA and the friends of the court, would have delivered a great service to South Africa.

Malema also showed a conciliatory approach towards the media, uncompromising but trying to undo the damage of the hurt-one-hurt-all approach after his remarks on banning the New Age and ANN7 journalists from EFF events. The South African National Editors’ Forum had described the utterances as “dangerous” and “unacceptable”. Malema paid tribute to the late Mandy Rossouw, who broke the Nkandla story for the Mail & Guardian, and praised all journalists who speak truth to power.

Is this constitutionalist edition the new EFF, a party that has now soaked up a new identity through the force of circumstance? Or is this constitutionalist populism transitory? Whichever it turns out to be, the week’s events revealed a pretty robust Constitution – one that charmed the populists, exposed the great pretenders and seemed to sail confidently on despite the strong headwinds that have threatened to batter it in the past.

Professor Susan Booysen teaches in the school of governance at the University of the Witwatersrand. She is the author of Dominance and Decline: The ANC in the Time of Zuma