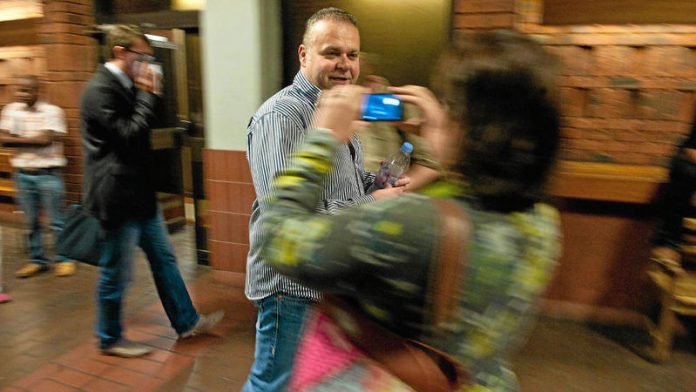 The witness, Jacob Nare, also claims that a senior police general was behind the refusal of the South African Police Service (SAPS) to extend his placement in a foreign location, forcing him back to South Africa.

That move, Nare says, was intended to flush him out into the open so that he could be killed because he is “about to give evidence against somebody [Krejcir] who is of interest to a lot of people in South Africa in the government”.

Krejcir has repeatedly demonstrated his ability to buy off police and other government officials and previously allegedly boasted of being untouchable because of his political connections.

Nare’s allegations are contained in two documents: a February 8 2016 letter written to senior police by a lawyer acting on his behalf, Darryl Furman, and a transcript of a December 2015 meeting he had with Dawood Adam, the head of the witness protection unit, an independent division in the National Prosecuting Authority.

AmaBhungane has seen both.

“supposed to kill three people that were causing Krejcir problems”

The transcript of the meeting reflects Nare’s frustration with Adam, who dismisses the suggestion that there was a security breach of the witness programme, the crux of Nare’s fear.

His reasons for not entering the witness programme stem from electronic communication he claims to have seen purporting to show the exact location where another witness, Bheki Lukhele, was being held under protection.

Krejcir and his co-accused, including three policemen, were convicted in August last year on charges linked to the kidnapping, torture and attempted murder of Lukhele in June 2013. Lukhele testified against them.

Furman lays out the extraordinary story in a letter to the deputy national commissioner for policing, Khehla Sithole, which was copied to the acting national police commissioner, Khomotso Phahlane.

He writes that “in late 2013, early 2014, Siboniso Miya [one of Krejcir’s co-accused] and other accomplices, were supposed to kill three people that were causing Krejcir problems”.

They were forensic investigator Paul O’Sullivan, crime intelligence official Colonel Nkosana “Killer” Ximba and Lukhele. It was only because O’Sullivan became a priority target, according to Nare, that Lukhele’s life was spared.

Furman says: “Our client has specific … knowledge of some of the many crimes that were committed by Krejcir and his accomplices. In this regard, he had penetrated the syndicate around Krejcir and was providing information back to his ‘handlers’ [in crime intelligence].

“At that time in late 2013, early 2014, Siboniso Miya and other accomplices were supposed to kill three people … The first to be killed was a state witness, who was a victim of Krejcir’s previous crimes of kidnapping, attempted murder and/or torture. His name was Bheki Lukhele.

“This witness was a key witness against Krejcir, after Krejcir was arrested in November 2013 and, as such, had been placed in the witness protection programme.

“The next person to be killed was … Paul O’Sullivan and after him, they were to kill Colonel ‘Killer’ Ximba.

“Our client was shocked by the audacity of Krejcir and his people, particularly Miya. The information he was able to garner included evidence of the fact that O’Sullivan’s co-ordinates were being sent to Miya, by police officials.

“Miya had also received an email from someone, showing the precise location of where Bheki Lukhele could be found.”

Furman writes that “it was by now clear to our client that Krejcir had penetrated, with his corruption, every organ of state, including the witness protection programme”.

“Our client advised his handler that on or about the third week of December 2013 O’Sullivan had been to the court, at Palm Ridge, where Krejcir was applying for bail and had supplied documents to assist the state to oppose bail of Krejcir.

‘‘Upon hearing this, Krejcir then gave instructions to Miya to change the plans and, instead of killing Bheki Lukhele first, they were to kill O’Sullivan and to do so urgently …”

But, the lawyer says, “as it transpired and because of our client’s involvement, the syndicate around Krejcir was completely broken and most of the people arrested”.

He says it was essential for Nare, as a key state witness, to “be properly looked after, given Krejcir’s previous propensity to murder witnesses”.

“Initially the police wanted our client to go into the witness protection programme. However, our client, having seen how they were about to murder Bheki Lukhele … flatly refused … Arrangements were then made for our client to be taken to the UK [United Kingdom], where he was to stay until the commencement of the trials.”

Nare’s fear that what was planned for Lukhele would happen to him if he was placed in the witness protection programme are underscored by the concerns raised in both his lawyer’s letter and the transcript.

They highlight his distrust of the SAPS head of detectives, Lieutenant General Vinesh Moonoo.

In his letter Furman says: “There were a number of incidents that took place with regard to Lieutenant General Moonoo and, when put together, our client suspects Moonoo of being involved with Radovan Krejcir …”

“Moonoo is going to help us out”

Furman says, when Miya and his accomplices were arrested on charges of conspiring to murder Lukhele, O’Sullivan and Ximba, Nare too was arrested, so that the others would not suspect he was undercover and supplying information about the syndicate’s activities.

“After our client was ‘arrested’ and sitting in Colonel Ximba’s car, Moonoo came to him and took a picture of him with his cellular phone,” the lawyer writes.

“Later on, when our client met Miya at the holding cells … He then asked our client if he saw the ‘Indian guy’ at the crime scene, and he named him ‘Moonoo’. Our client said he did [see Moonoo] and that Moonoo had taken our client’s picture.

“Miya then told our client that ‘Moonoo is going to help us out, because he is Krejcir’s connection’ and went on to say that they had nothing to worry about.”

Furman then details a series of interactions between Moonoo and Nare, during the time that the latter was under witness protection in the UK. They claim these bolstered Nare’s belief that Moonoo did not have “the interests of the country at heart any more”.

The strained relations came to a head when Nare, by arrangement with Moonoo, returned to South Africa just before Christmas last year to spend the holiday with his son.

Nare expected to fly back to the UK, but instead Moonoo allegedly told him he was to be admitted into the local witness protection programme, because the acting national commissioner of police had ordered the termination of police funding for his UK security.

“… connections and his influence in the government, in the whole system of South Africa”

On Christmas Eve, Nare attended a meeting with Adam, the head of the witness protection unit, the investigating officer in the Krejcir case, Captain Bongani Gininda, and his supervisor, Major General Norman Taioe.

According to the transcript of the meeting, Adam boasted about how impregnable the witness protection programme was.

But Nare asked why, if Adam was aware of Krejcir’s “connections and his influence in the government, in the whole system of South Africa … Do you think you placing me within the borders of South Africa, am I safe?”

Adam assured him: “He [Krejcir] might [have] connections all over [but] he’s got no connections with the office of the witness protection.”

Nare then recounted his story about Lukhele, but Adam refused to believe that Krejcir had genuine information about the location of the witness and the meeting ended in a stalemate.

The transcript reveals that it was not only Nare who had concerns but also the investigating officer.

“… subject of one of the upcoming trials and is sub judice”

The officer is shown as voicing suspicions about the reason cited for bringing Nare back to South Africa – that the trials were about to start.

Once Adam is out of the room, a suggestion is recorded in the transcript that O’Sullivan might be better placed to protect Nare.

One of the investigating officers said: “I know with him [O’Sullivan] being in the same [boat with] Krejcir, he will protect him [Nare] to the best of his ability, because other than that it is to leave him on the street, and I don’t think that’s proper.”

In response to detailed questions, police spokesperson Brigadier Hangwani Mulaudzi said: “The management of the witness protection programme does not reside within the SAPS. It is our view that if any party feels aggrieved in any way, there are platforms where such grievances may be taken up.”

Miya’s last attorney on record could not be reached for comment.

*Miya on Friday denied Nare’s allegations, calling him an “imposter and fraudster”, and someone who would “make things like this up”.

Speaking to amaBhungane from prison, Miya said he has known Nare for over 12 years, since they met in jail in 2003.

“Nare is not even his real name. I don’t even know how many names he has. He is a foreigner. He was born in Zimbabwe,” Miya said of the state witness.

Miya claimed that Nare is being “shielded” by O’Sullivan because the latter would do anything to get at Krejcir.

Miya also alleged that Nare had not been honest about several things, including his claim that Miya had mentioned Moonoo and Krejcir’s relationship.   “I don’t know anything about the politics in SAPS. I only met Moonoo once, when we were arrested. He said [to the police] that they didn’t have a strong enough case against us.”

Miya suggested O’Sullivan and police investigators then twisted this to create a conspiracy that Krejcir could ensure their protection because of his “connections”.

*This update was received on Friday morning, post publication of the M&G.