Inquiry into Grayston bridge collapse off to a slow start 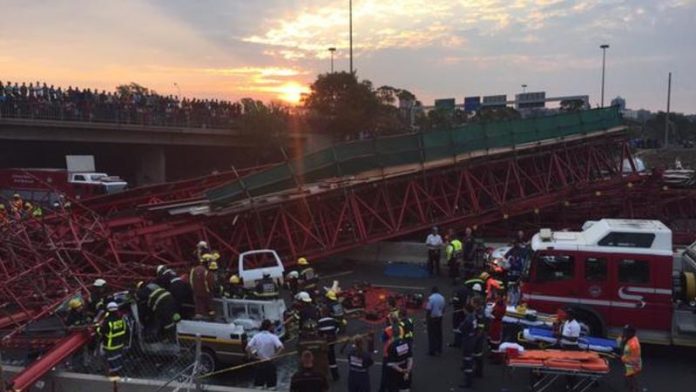 The temporary bridge, which collapsed last October on to Johannesburg’s M1 and Grayston Drive interchange, was constructed because more than 10 000 pedestrians cross over the area every day.

This was the submission made today by the project’s principal engineer, Siyabonga Genu, during the first sitting of the Labour Department’s inquiry into what caused the bridge to the cave in. Two people were killed and 19 others injured in the accident.

Genu told the inquiry’s presiding officer, Lennie Samuel, that he had attended monthly progress meetings on site with those responsible for the construction of the bridge. Issues of health, safety and progress were discussed and site inspections were undertaken but Genu could not say what ultimately led to the bridge’s collapse.

No witnesses were called during today’s sitting because it was convened as a platform for all parties connected with the construction to present their respective reports.

Murray & Roberts, the construction company awarded the tender, gave a brief outline of the scope of work required from their side, which included excavations, earthworks and erecting structures. The company’s counsel, Richard Haul, stressed that it was the temporary structure that collapsed; the permanent bridge is still to be built.

The remnants of the temporary bridge are being stored by Murray & Roberts.

Ewan Rudolph, the legal representative for Form Scaff, told the inquiry that his client was not responsible for the design or erection of the structures; the company had supplied Murray & Roberts with the building materials.

The next sitting is scheduled for April 19 and Samuel has given all parties until the end of March to submit their final investigation reports for consideration.

4 injured in bridge collapse on N3 highway in Germiston

‘There’s going to be pain’: Jo’burg set for M1 upgrade

Who will take the fall for the M1 Grayston bridge collapse?