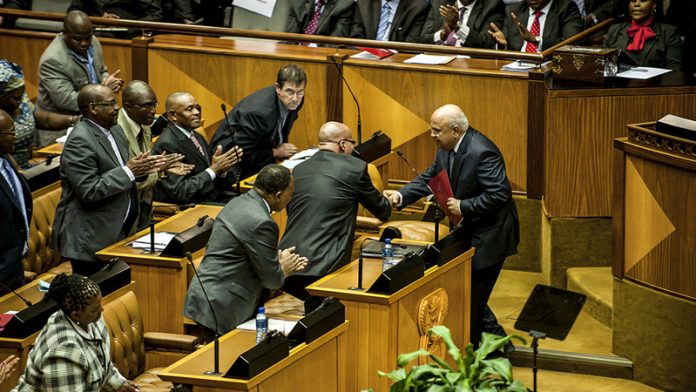 With South Africans and the markets looking to the February 24 budget for a road map out of an impending economic recession, Finance Minister Pravin Gordhan is expected to spend the next few days fine-tuning his speech.

Interest rates are up, food prices are on the rise and the country is in the grip of a drought.

The fact that Gordhan and President Jacob Zuma met business leaders shortly before the president’s State of the Nation address shows a willingness by the government to please business. Zuma is to meet black professionals in Johannesburg on Friday.

At the same time, the Cabinet attempted to appease labour this week by announcing that it would push back by two years the implementation of the Taxation Laws Amendment Act to allow for more consultation with Cosatu, which has fiercely objected to the new law.

South Africa is also facing a further credit ratings downgrade that could see the country relegated to “junk” status. Such a rating is viewed as risky to investors and would ultimately raise the cost of borrowing for governments, businesses and individuals.

A great deal of hope is being pinned on Gordhan’s budget, Moham­med Nalla, head of strategic research at Nedbank Capital, said in a research note.

The State of the Nation speech indicated “superficial acknowledgment of expenditure cuts” that will be needed, said Nalla, but it shed little light on specific cuts other than exploring the consolidation of the country’s two capitals, as well as some notional cuts to travel and catering expenditure.

“Much of the heavy lifting will be left to the finance minister,” Nalla said.

Opposition politicians have argued that real cost-cutting would start with the high public sector wage bill, but again, labour federation Cosatu could take action if salaries were curbed or jobs were shed.

Nalla said South Africa’s poor performance was not a result of political developments in the past year, but rather a result of a “chronic impasse in getting more market-friendly policies off the ground”, coupled with a sense of inefficiency in government spending, among global factors.

Tax increases are a forgone conclusion. In the best-case scenario Gordhan would hike taxes on a progressive basis, said Nalla, with increased taxes on the wealthy while still offering tax relief for low-income earners. Value-added tax could be increased by at least 1% – a contentious move – but the list of VAT-free items may be expanded.

The cost of servicing the government’s debt was also a high expenditure item, Nalla said.

He said the government should commit to listing or partially listing state-owned enterprises to allow greater private sector involvement, but it could run into opposition from Cosatu.

Investec’s Annabel Bishop warned that a failure to put in place measures that will boost the economy and curtail government spending, particularly on civil service salaries, will make it difficult to avoid a downgrade.

For Gordhan, it would be an even tougher speech than the one he delivered in 2009 after succeeding the long-serving Trevor Manuel.

When he steps up to the podium on Wednesday afternoon to table his budget to a joint sitting of Parliament, Gordhan will be keenly aware of the fact that the world economy is under enormous pressure, as a result, in part, to a slowdown in China.

Politically, the confidence of international and local observers was dented by what became known as 9/12, when Zuma shocked even the ANC rank and file by replacing Nhlanhla Nene with Des van Rooyen in the finance portfolio. Gordhan’s hasty reappointment three days later was an effort to stabilise the markets and curb a free-falling rand.

It will now be up to Gordhan to do the unpleasant money talk. He does so from a position of relative political power. As a member of the ANC’s national executive committee, he yields more influence than, say, Nene or Van Rooyen.

This week he will be closely watched for two things: how well he juggles the country’s finances with not much fiscal room to manoeuvre, and how much free rein he has to fix the broken economy.

It’s not an enviable task in an elections year, when the governing ANC will need all the help it can get from a somewhat disgruntled Cosatu to retain power in key metros.

Economic growth is projected to fall below 1% this year, which will make things tough for job creation, and for raising the revenue for public sector wage rises and sustaining the social welfare programme, which keeps voters sweet and local economies ticking.

Zuma last week acknowledged that economic difficulties since the 2008 financial crisis remain, financial markets are volatile, and the currencies of emerging markets are weak. He also admitted that the unstable power supply and labour relations contribute to these difficulties.