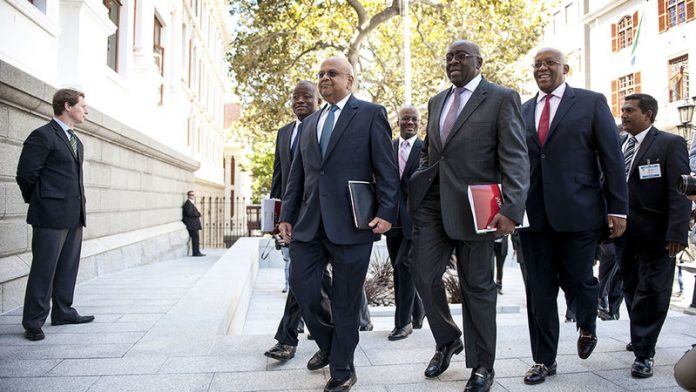 Finance Minister Pravin Gordhan has few easy choices when it comes to raising extra revenue in the next financial year.

And several analysts believe the tax rate for high-income earners could be raised, which would bring in an extra R10-billion a year.

Business leaders, who met the finance minister a few weeks ago, also agreed that an increase in the marginal tax rate of wealthy individuals was one acceptable way to raise revenue.

Of those, only 2.2% would have earned more than R1-million a year each, but they would have contributed almost 17% of the total taxable amount.

Additional revenue
Jannie Rossouw, the head of the school of economic and business sciences at the University of the Witwatersrand, said a tax on these higher-income individuals could raise as much as R10-billion in additional revenue.

This was shown by research conducted by Rossouw and two Unisa researchers, Fanie Joubert and Adele Breytenbach, which was originally published in the South African Academy for Science and Art’s Tydskrif vir Geesteswetenskappe.

How far this would go towards plugging the fiscal gap is yet to be seen. The budget deficit was 3.8% of gross domestic product in 2014. But since then, there has been a call for free university education and public servant wages remain a threat.

If the tax on high-income individuals is increased, white South Africans will be affected most.

White earners
Sars does not collect data on the race of taxpayers, but the income and expenditure database at Unisa’s Bureau of Market Research (BMR) does provide income data in terms of population groups. However, it focuses on total cash income and not on taxable income. Taxable income is less than the actual income.

The marginal tax rate went up to 72% in the early 1970s, but the Davis tax committee, in a macro-analysis report released for public comment in August last year, found that, through many tax amendments from the late 1980s until the late 1990s, there has been substantial relief in personal income tax for all income groups.

In a budget overview authored by Nazrien Kader, the managing partner of taxation services at Deloitte, she said it is “very possible” the marginal rate of tax for individuals will be raised to 45%, which it was in the late 1980s.

Shohana Mohan, the associate director of global mobility services at KPMG, said: “We know in the budget for this year the theme is falling squarely in the realm of increasing revenue collection. And personal income tax is the largest revenue collector.”

A marginal tax rate increase is likely, Mohan said, but there could also be a super-tax, which would kick in at a certain threshold, probably on those earning more than R750 000 a year.

Super-income tax
Peter Attard Montalto, an emerging markets analyst at Nomura, said he, too, expected either a new super-income tax rate, or a slightly higher current tax rate for the top band, which would appear to be progressive, but he believed the fiscal impact of this alone would be small.

The appearance of progressive tax could smooth the way for a VAT hike. He said a one to two percentage point hike from 14% is possible.

Rossouw said he was not in favour of increased VAT because it weighs heavily on the poor, but, as a way of comparison, every one percentage point increase in VAT will raise about R28-billion. “So this tax for higher income earners would have a smaller impact than VAT.”

The state can also make use of bracket creep. If the finance minister does not adjust tax brackets for inflation this year but salaries go up, this would result in many taxpayers moving into a higher tax bracket.

But when deciding how much to tax different income groups, one has to consider several things, Rossouw said.

The affordability principle is key – people have to be able to afford to pay the tax. “People earning more than R1-million a year have the ability to afford it. Their basic needs have been met and they have discretionary income.”

According to the benefit principle, people pay tax if they believe they will get benefits, such as improved services or infrastructure, from it, Rossouw said.

Behaviour factor
The estimated R10-billion in additional revenue, however, is based on the assumption that behaviours will not change.

“People can emigrate, or with a higher tax rate they can decide to work less,” Rossouw said.

It’s hoped that a marginal tax increase for higher income earners could remove some of the pressure for a wealth tax, said Rossouw.

Kader, in her budget overview, said it was far too premature to implement a wealth tax.

Attard Montalto said the treasury has said that it won’t act before the Davis tax committee rules on it, which is unlikely until later this year.