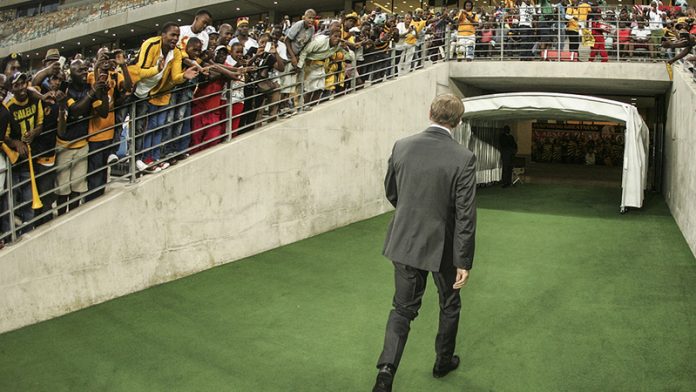 Stuart Baxter was always likely to return to the South African footballing arena at some stage or another, but the intriguing prospect of him going up against his former Kaizer Chiefs charges less than a year after leaving them was not anticipated.

The 62-year-old Englishman (erroneously dubbed a Scot in many quarters) takes charge of his new club SuperSport United on Saturday night against Kaizer Chiefs in Cape Town, just weeks after returning to the Premier Soccer League.

This time last year he was leading Chiefs to a second title in three seasons, restoring a public reputation that had been sullied by his barren run with Bafana Bafana between 2004 and 2005.

Bafana’s failure to qualify for the World Cup in Germany, blowing an advantageous position by losing at home to Ghana in their penultimate qualifier, branded Baxter a failure, even if his overall record with the national team was 10 wins, six draws and seven defeats in 23 outings.

Rectifying this perception was among the motivations that fuelled his return when Chiefs hired him in 2012, and Baxter quickly reaffirmed his abilities by bringing a championship title to the team for the first time in seven years.

In his three seasons at the club, Chiefs won the Premier Soccer League championship twice plus the Nedbank Cup and MTN8 trophies.

But towards the end of the third campaign, the relationship between Baxter and Chiefs began to unravel, leading to an extraordinary farewell press conference where the mutual expressions of bonhomie rang hollow.

Player acquisition was one area in which Baxter was blatantly excluded, like the purchase of David Zulu, which he knew nothing about until the player landed from Chippa United. He was most irritated by the management’s unilateral approach to strengthening his squad.

Baxter wanted a more classic-style No 9 and brought journeyman forward James Keene out from Sweden for extensive trials, punting the English player’s virtues to the press in an attempt to force Chiefs to sign him. They did not, to the coach’s chagrin, although in hindsight Keene’s impact at Bidvest Wits over the past two months suggests Chiefs missed a trick.

Baxter went off to a risky job in Turkey, where he lasted mere weeks, and has been waiting in the wings to take over at SuperSport United for months now. He was due to replace Gordon Igesund at the end of the season, but the club’s disappointing results hastened his appointment.

His three matches in charge since his arrival have seen SuperSport pick up four out of a possible nine points, but the hope will be that the club can gain momentum and finish easily inside the top eight by season’s end.

They have a decent enough squad, although Baxter’s remit will be to ensure league success from next season onwards. How realistic their expectations are will be evident on Saturday when Baxter’s team trots out against his old charges.

Chiefs are significantly changed since his departure, with successor Steve Komphela more attacking in his approach but missing the structural discipline that was the cornerstone of Baxter’s success.

The Chiefs players probably prefer the Komphela way, unshackled from the strictures that Baxter held dear, but Komphela continues to toil under the shadow of his predecessor, having yet to pick up any silverware since taking over and finding himself 10 points behind leaders Mamelodi Sundowns in the title race.

Komphela used to be Baxter’s assistant with the national team, but he must be getting increasingly tired of comparisons between his current Chiefs side and the one that won the title a year ago. It adds a tasty little sideline rivalry to the occasion.

Saturday’s match is the last of a trio Chiefs have “hosted” in Cape Town in a lucrative arrangement with a city council keen to use better their World Cup stadium.

But the last game saw them concede two goals in the closing stages and lose to Platinum Stars to severely dent their title hopes. The crowds for the previous two games did not top 20 000, suggesting Cape Town might well have wasted its ratepayers’ money.