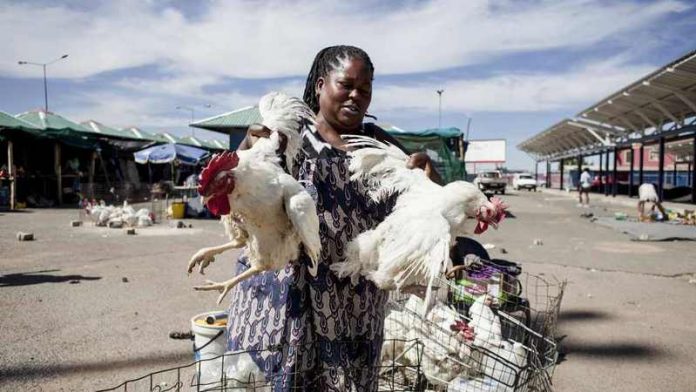 On a hot summer’s day in Diepkloof, Soweto, large hens walk sluggishly around their cage, weary from the day’s heat. A piece of material has been placed on the roof of the cage to shade them, but even their owner, Angela Langa (40), rests back in her chair while she watches them.

“It’s not possible to not sell the chickens in Soweto. They are everywhere for a reason,” Langa says.

Chicken is a big part of business and culture in Soweto, as it is for most of South Africa. The most recent statistics from the South African Poultry Association show that South Africans consumed nearly 2 441-million tonnes of chicken and eggs in 2012. Each person eats about 36kg of chicken products a year – a third more than pork, beef, mutton and goat combined.

Still, there’s a special place among South Africans for a “hard body” – chickens that are freshly slaughtered. Street traders like Langa make a living from the live chickens they sell every day. Langa sources her chickens from a reseller in Lenasia, who receives them from farms.

“I saw it as a profitable business. A lot of people like the livestock, not that chicken that they sell at Pick n Pay,” Langa says.

“Hard bodies” get their name because their bones are regarded as harder to chew than those of store-bought chickens.

Langa started her business small, learning how to care for the few chickens she had before she started buying at least 50 chickens every Monday. After seven years in the business, she’s now earned a reputation as a reliable chicken trader.

One of her customers, Bafana Mthembu, stands nearby, chatting to traders. He maintains that he’s loyal to hard-body chickens because they are simply better than the store-bought variety.

“It depends on how you cook it. If you kill it, the body is hard. You just have to boil it hard and put some ingredients so that it gets its taste. That taste is a juicy taste. It’s a yummy taste, unlike that one in the shop,” he says.

This week, South Africa will receive 60 000 tonnes of chicken from the United States. The import is part of the African Growth and Opportunity Act, and it has been hotly contested.

In 2015 South Africa refused to allow US poultry, beef and pork products entry into the country because of the existing anti-dumping duties and for health reasons, including fears of salmonella infection. After threats from the US and lengthy negotiations, South Africa agreed to lift the restrictions.

For Sowetans such as Mthembu, fresh chicken – the hard-body birds – is what keeps them from stepping inside stores for frozen meat and buying products flown in from other nations.

“This is a live chicken. You get that other one in the shop, but they’ve already been processed. It’s no longer the same chicken like this one. This one is the original chicken,” he says.

Mthembu admits that he’s unsure how well the chickens are treated before they reach Langa’s informal store. He maintains, however, that there is no need for US chickens to enter South Africa.

“I don’t think we need them. If we can have our own chickens here, why do we need chickens from America? I mean, we don’t know how healthy is the lifestyle of the chickens there,” he says.

The chain of chicken supply and demand is firmly entrenched in Soweto, as it is throughout South Africa. Suppliers from Gauteng and other provinces, such as the North West and the Western Cape, supply chickens to traders in Soweto.

The poultry is cheaper than red meat, and many Sowetans slaughter the chickens themselves.

One such trader, Hellen Tshabalala (29), has chickens delivered to her home. She slaughters them by cutting their throats, before scalding them so that the women who work for her can pluck the feathers.

“Can you imagine owning a farm with chickens and not bringing them here to Soweto to sell? Would they have money? He won’t have money. They need to sell us chickens so they get money,” Mthembu says.

But some farms are struggling to keep up. A farm west of Soweto, towards Kagiso, has been sitting with an empty chicken run for three weeks. The farm has six suppliers in different areas in the province and the country. All have been unable to supply chickens for various reasons.

With strict contracts in place, the farm cannot source the livestock from elsewhere. Certain farms in the area have apparently received more chickens because they either have no contracts in place or their ­suppliers are managing to keep up with the demand.

For the farm near Kagiso, it’s been three weeks without fresh chickens, the only traces of which are droppings and stray feathers. The farm usually orders at least 1 000 chickens a day and sells them the same day. The contrast between the empty chicken shed and the street traders who have containers brimming with chickens is jarring.

Although informal traders are managing to find chickens through their suppliers, theirs is a very specific business – the business of hard bodies. Though supply may be running short in some areas, demand certainly isn’t declining.

“It’s a live chicken,” says Langa. “It tastes different – this one is nice. Me too, I like this one.”