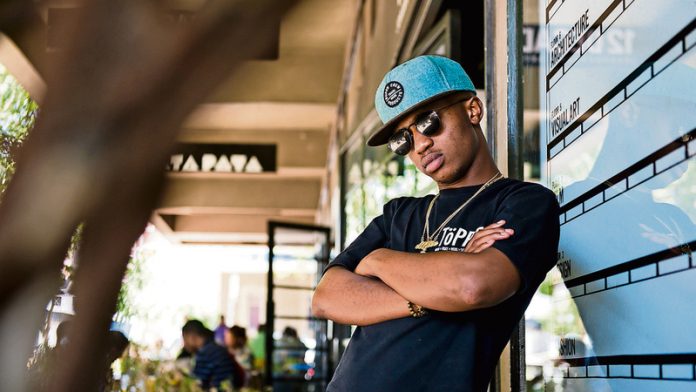 Few would willingly place bets on a marimba-playing choirboy going on to become one of the country’s rising urban music stars and doing the seemingly unthinkable by bagging Song of the Year at the South African Hip-Hop awards with only one hit under his belt.

It’s come as no surprise to the man himself, though. If there’s one thing Emtee has no shortage of, it’s confidence – which is ironic for someone who comes across as softly spoken and laid-back when you meet him. There’s not a hint of the physical bravado and arrogance usually associated with rappers and nothing of the avid Twitter user who, at times, irks his followers with his brashness.

Clearly, this is someone who has mastered the art of composure – at least when it comes to doing interviews. Even his attire belies his prominence on the local music scene: a simple black T-shirt, black tracksuit pants with white stripes and a pair of sneakers. His shades add the cool factor.

A Xhosa who was born in the Eastern Cape town of Matatiele, Emtee grew up in Soweto and went to school in Johannesburg’s Berea. He describes himself as an artist with varied interests and experience in painting, drama, theatre, different music forms, drawing and graffiti – although performance art and music are his priorities.

His ear for music is like no other, he says, and is one of the main reasons he feels he stands out.

From choirboy to rapper
So, although most people were surprised that he seemingly came out of nowhere and set the hip-hop industry alight with Roll Up, Emtee himself expected it.

“I believe in myself, know what I’m capable of and [realise] what I have to offer,” he says. “I don’t even remember myself having a nine-to-five job except for one that lasted a week. This [music] is what I wanted to do and ever since deciding to take my [musical] career seriously, things have gone smoothly.”

But how did this emcee come to be a choirboy?

School was out and the young boys were bored, so they entertained themselves with a game of football, he relates. While they were playing one day, they heard the choir singing and abandoned their game to go peep through the windows.

When the conductor unexpectedly ran out to attend to a pressing matter, they snuck in and positioned themselves among the other choristers – and new choirboys were born.

“I fell in love with it and was even the conductor at one point. I also became leader of the school’s marimba band and I’m the best marimba player that ever lived,” he says, without guile.

Adept at mimicking other rappers, he started writing his own rhymes at the age of nine. High school is where he became more serious about rapping and it was from there that he started approaching people in the industry “and studying the game”.

“When I was with these public figures, I took it as a form of mentorship instead of me just nagging them. I kept my cool and strategised, and [the mentorships] gave me concepts for new songs and allowed me to see what the streets really wanted.”

Making African trap music
He became comfortable with making music and eventually found his sound. So how does he describe it?

It’s ATM, he says, which stands for African trap music: a genre that speaks to young South Africans from the townships but has managed to attract fans beyond that scope.

“It’s destiny,” he says when asked about the positive reviews he has received for his music. “It’s meant to be like that. At the same time, I appreciate it, especially when people who don’t get along say they like my stuff.”

The latter is in reference to praise he has received from fellow rappers (and notorious rivals) AKA and Cassper Nyovest. Although everything he has ever dreamed of has come to fruition musically, Emtee still doesn’t view himself as successful as much more needs to be done.

Emtee is nominated for the Metro FM Music awards for Best Hip-Hop Album, Best New Artist, Best Remix and Best Music Video for Roll Up. The winners will be revealed on February 27.

He has also just released his Pearl Thusi video and is working on collaborations and an album tour. Acting is also on the cards somewhere down the line and, no, he won’t tell us what his next single will be. It’s a surprise.

“I’m so thankful. Even for bubblegum. I’m in the city of Jo’burg doing big things and other kids out there would love to be in my shoes, so that’s why I try hard to be down to earth and respect everyone.”