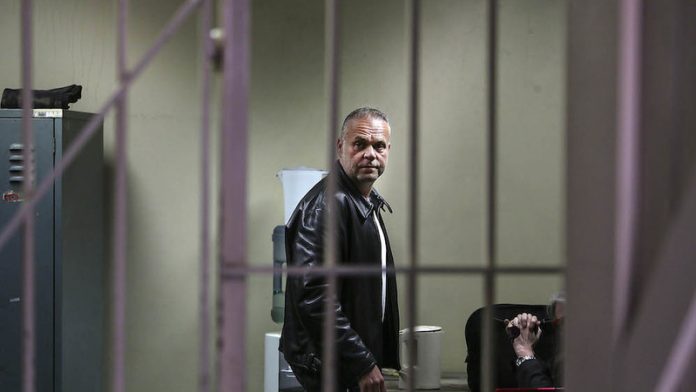 Radovan Krejcir has said that he chose South Africa to escape a political conspiracy aimed against his family by the Czech government because it has the “best Constitution in the world”.

Indeed, it may yet prove to be his salvation. After his sentencing hearing this week, his new lawyer, Cliff Alexander, said Krejcir’s constitutional rights were infringed when his requests to consult a lawyer were rejected by Judge Collin Lamont.

If he is granted leave to appeal against the 35-year jail sentence that the Johannesburg high court imposed on him on Tuesday, it would probably be on those grounds.

The sentence followed a two-year trial. Krejcir and five others were convicted on charges of kidnapping, attempted murder and drug dealing in August last year.

This is the first of four criminal trials he is facing since his arrest in November 2013.

Members of a police task team set up to investigate alleged criminality within Krejcir’s circle arrested him on kidnapping-related charges.

But a further charge of conspiracy to commit murder and two charges of murder have since been brought against him.

On Monday this week, Krejcir told Lamont he needed more time to contact Alexander. He asked for a court order instructing prison officials to allow him to make a phone call to this effect.

But Lamont dismissed his request, saying Krejcir had had “16 days” in which to arrange a legal representative.

Since his conviction, Krejcir has changed his legal representation several times – a contributing factor in the seven-month sentencing delay.

Ruling on Tuesday afternoon, Lamont said Krejcir was a “very intelligent man” who, because he had made “millions” in the Czech Republic, was able to retire by 2005.

Questions arose over the delay in a transfer of R250 000 from Krejcir’s previous lawyer, whom he fired in January, to Alexander.

Krejcir confirmed his wealth to the court and agreed that he “has never worked” in South Africa since he arrived here illegally on a false passport in April 2007.

He was convicted and sentenced in absentia in his home country on various counts, including fraud, tax evasion, money laundering and attempted kidnapping.

In 2005, he evaded arrest at his Prague home and escaped to the Seychelles, where he lived with his wife and son for two years.

Krejcir told Lamont that he “made money legally” when he started his own company “in printing and real estate … as part of privatisation in the Czech Republic”.

He benefited from the government’s rapid transformation to a market economy in the late 1980s.

“… part of this conspiracy against me and my family… “

During this week’s two-day sentencing hearing, Krejcir brought repeated applications to have the case postponed, including applications for witnesses to be subpoenaed and for his wrist and ankle chains to be removed.

Matters came to a head over the issue of legal representation. Lamont asked Krejcir why the high court registrar had not received a letter of appointment for Alexander.

Krejcir sidestepped this question. Instead he asked Lamont to recuse himself from the sentencing proceedings, claiming he was biased and ignored his rights. He then accused the judge of being “part of this conspiracy against me and my family”.

This is a persistent claim. In his affidavit in support of his December 2013 bail application, following his arrest, he claimed there was a conspiracy against him in the Czech Republic flowing from his allegation that he had funded the election campaign of the country’s former prime minister.

He returned to his claims of conspiracy in his current trial. In Lamont’s August 2015 judgment, he said Krejcir’s counsel, cross-examining a state witness, “appeared to me to attempt to establish that there was a conspiracy by the police to justify the arrest of at least [Krejcir and Luphondo]”. Lamont found that “no such conspiracy was ever established, neither was there any evidence of such a conspiracy”.

But questions persist over the role of crime intelligence officials in Krejcir’s arrest and investigation. They include Colonel Nkosana “Killer” Ximba, whose name cropped up throughout the trial in relation to his alleged role in torturing Krejcir after his arrest in November 2013.

“clear the accused are part of a well-organised syndicate”

In his August judgement, Lamont said: “The evidence concerning Ximba paints him as a shadowy figure who is mentioned as entering and exiting various scenes but who plays no visible role.”

Several state witnesses, who received indemnity from criminal prosecution in return for their evidence, also referred to their relationship with Ximba, a protégé of controversial former crime intelligence boss Richard Mdluli.

State prosecutor Lethabo Mashiane told the court this week that evidence from two witnesses who testified for the state, Paul Mthabela and Peter Msimango, had made it “clear the accused are part of a well-organised syndicate”, adding that “not all members of this syndicate have been arrested”.

Lamont, in a veiled reference to Ximba, suggested the syndicate “might even include the colonel”.

Mashiane also referred to evidence from a witness who said Krejcir claimed there was no police officer in South Africa who would arrest him.

There have been other allegations of Krejcir’s links to the security forces. Not long after he settled into his palatial Bedfordview mansion with his family, he allegedly linked up with the then Gauteng crime intelligence boss, Joey Mabasa.

“… arrogant and disrespectful of the laws of this country… “

Although Mabasa denied any personal connection, his wife, Dorcas, was a co-director of a company with Krejcir’s wife, Katerina.

This week Mashiane said Krejcir “is arrogant and disrespectful of the laws of this country” and lambasted three of his co-accused, who were in the specialised Hawks unit before being convicted.

He said: “They betrayed their employer. They are meant to be part of an elite unit. Hawks’ appointees’ integrity must be beyond reproach.”

Mashiane said their actions could be “equated to the betrayal of Judas in the Bible”.

Despite Krejcir’s assertion that Lamont had favoured the state and “put words in the mouths of state witnesses” during the trial, the judge was brutal in his assessment of the investigating officer in the case.

Lamont recorded in his August 2015 judgment that Captain Freddy Ramuhala was “dishonest, devious and totally untrustworthy … He in addition … [is] reckless and uncaring about the accuracy of his evidence”.

Ramuhala, who with several other officers involved in investigating several cases against Krejcir was promoted, was scolded for his ­conduct both in court and during his investigation.

Lamont said: “It is a particularly saddening feature that a senior police officer of this calibre, who is involved with and attached to a senior unit in the police, can conduct himself in this manner in a court of law and also towards persons whom he arrests.”

Lamont found Krejcir was tortured after his arrest. He also ruled inadmissible a statement in which Luphondo implicated Krejcir after his arrest, also in November 2013, following a trial within a trial last year.

Despite these setbacks, Mashiane achieved what some speculated was impossible in the wake of Lamont’s damning findings against the police investigation – a conviction. He might be considered the unsung hero of the Krejcir trial.

The sometimes browbeaten prosecutor was placed under 24-hour protection in December 2013 after receiving, he said, a threatening phone call shortly after Krejcir’s arrest warning him that if he knew what was good for him he would not oppose bail.

But bail was denied, with the magistrate, Reginald Dama, saying Krejcir’s convictions in the Czech Republic “cannot be ignored”.

“It is obvious that he [Krejcir] was misrepresenting himself to authorities. How can this man be trusted not to repeat this trickery, which is mind-boggling?” Dama said.

Lamont appeared to recognise Mashiane’s difficult position when he assessed the credibility of evidence led by state witnesses in his judgment.

“The true result of the police’s improper and inadequate investigation in this case is that it put the state case at risk,” he said. “The state’s case was dependent upon an unlawfully obtained confession which was excluded in evidence and such witnesses as the state was able to marshal.”

Krejcir’s alleged reputation as a gang boss was clearly visible during the hearing. Lamont was also placed under 24-hour protection. But Krejcir claimed that unsubstantiated and “sensational news reports” alleged that he was plotting to kill Lamont fed into the judge’s bias.

This, Krejcir claimed, was illustrated by the presence of at least a dozen tactical response team members, armed with R5 rifles in court at any time.

But Lamont has previously addressed security-related concerns. In April last year, he said: “I currently do not consider any person in this court to be the perpetrator of any act. However, in so far as the security of this court is a matter of my concern, I deal with it.”

The presence of heavily armed policemen throughout the trial recalled a previous, unsuccessful, case against the Czech. In 2011, he was charged with fraud in relation to a R4.5-million claim he made to an insurance company, using medical papers stating he had cancer.

The name of the prosecutor in that case, Riegal du Toit, was allegedly found on a “hit list” at Krejcir’s house during a police raid. Du Toit was given 24-hour security during the case.