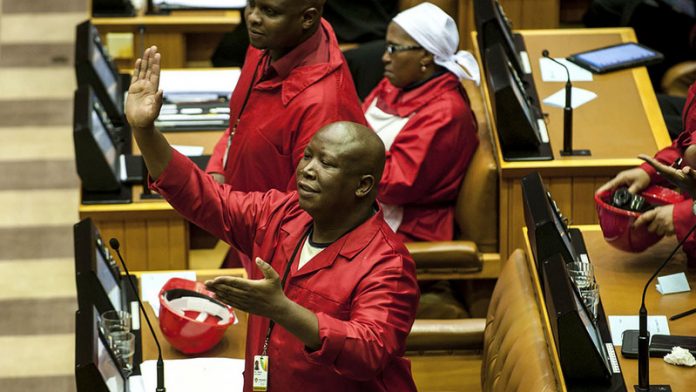 Much has been said about the heckling by the Economic Freedom Fighters (EFF) of President Jacob Zuma and the National Assembly speaker, Baleka Mbete, during the State of the Nation address on February 11.

Those of us who live in dictatorships – the vast majority of Africa’s inhabitants – watched in absolute awe as EFF chief Julius Malema led what looked like a well co-ordinated campaign to test the ANC’s commitment to the rule of law and constitutionalism by disrupting the address.

The less-reported exchange between Mbete and EFF MPs, about the attempt to suspend parliamentary rules, calls for closer attention.

Mbete had endured a bruising encounter in the Constitutional Court two days earlier, where her lawyer suffered what must have been the worst humiliation of her legal career. This had to do with the Nkandla matter, and whether the public protector’s report on expenditure on the president’s home should be dealt with by Parliament.

Back in Parliament, two days later, Mbete sought to reassert her authority by proclaiming that some rules would be suspended to assure the smooth delivery of the president’s address. There would be no interruptions. Comments or questions on points of order or privilege could only be raised the following week.

Malema and his deputy, Floyd Shivambu, took turns to ask Mbete how she had arrived at such a decision without the matter having been debated and voted on by MPs.

“You cannot just come and announce that this is what is going to happen in a democratic Parliament,” said Malema.

That exchange highlights a problem that has beset African politics for many years: the tendency of those in power to take unilateral decisions without following any rules and, in most cases, undermining the rule of law. African leaders have, since the end of colonialism, generally had difficulty with appreciating the importance of the rule of law.

Go back two days, to the Constitutional Court’s Nkandla hearing. A picture emerges: had the EFF not called Mbete to order, Zuma’s address may have been put in legal jeopardy. If the speaker’s unilateral directive had gone unchallenged and was later found to have been illegal, it could have rendered the joint sitting without standing in law.

Why did Mbete believe it within her powers to take such a decision? In the Constitutional Court, her lawyer, Lindi Nkosi-Thomas SC, told Chief Justice Mogoeng Mogoeng that Parliament was not bound by the public protector’s recommendations.

She said: “Ours is not an enforcement mechanism, similar or akin to the sheriff of a court. She [the public protector] cannot look to Parliament and expect of Parliament to merely rubber-stamp [her recommendations] without applying its mind.”

But it is the Constitution, not the person of the public protector, that says Parliament must exercise oversight of her recommendations and call the president to account. This escaped Nkosi-Thomas and her client, much to their later embarrassment. To understand the lack of appreciation of the requisites of constitutional action and the rule of law, one has to take a step back. As long ago as the 1950s, one of Africa’s most respected leaders, Kwame Nkrumah of Ghana, complained bitterly about laws written by the colonial masters that were out of sync with African values and traditions. He argued that these laws defeated what he termed “natural justice”. Natural justice, it seems, is the right of a leader to assert authority without any hindrance – including the law.

When asked by the EFF what authority she had to suspend parliamentary rules, Mbete said: “We have the power of the chair.”

This power is born of the belief among African leaders that the exercise of authority is not subject to questioning. It assumes that those in authority will have the natural wisdom to take decisions unconfined by legal niceties. Hence, so many constitutions in African countries have been abrogated or amended to suit the desires of the incumbent ruler.

It is very easy to condemn the EFF’s behaviour in Parliament and call its members uncouth.

But the EFF, in trying to embarrass the president and the ANC, may have inadvertently saved the country from an illegal joint sitting for the State of the Nation address, which would really have made a mockery of South Africa’s democracy.