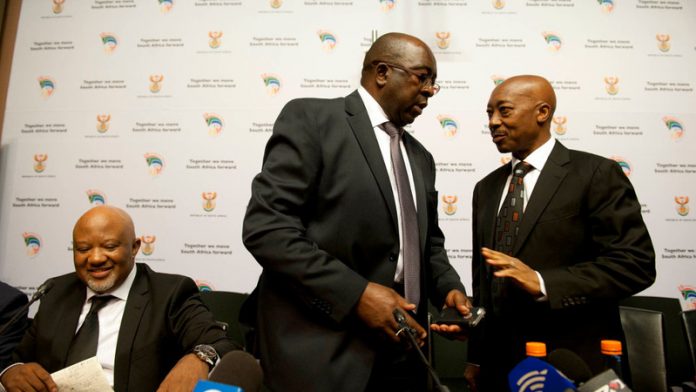 Following Cabinet’s meeting on Wednesday, it called on “all interested parties to exercise calm and restraint, and allow space for the matters to be resolved using correct channels”.

“The president is putting measures in place to address the issues responsibly and amicably for the benefit of all.”

Gordhan wants Zuma to fire Moyane owing to a breakdown in their working relationship, while the Hawks investigation into the “rogue unit” at Sars has been criticised for interfering with the minister ahead of his budget address last week.

Gordhan informed the Hawks on Wednesday that he needs more time before responding to the questions they sent last week.

“He will respond in due course, once he has properly examined the questions and ascertained what information, of the information you request, he is able to provide,” Gordhan told the Hawks through his lawyers.

“We request the following information to assist him in preparing his response: On what authority do you rely on directing these questions to the honourable minister? Are you investigating any offence? If so, what is it?”

The questions do not mean the former Sars head is under investigation, Police Minister Nathi Nhleko said on Wednesday. “It is for clarity,” he told a media briefing, saying the response would form part of the probe.

Among the 27 questions posed to the former Sars commissioner are whether or not he had any knowledge of the disbandment of the National Research Group in 2009, leading to the establishment of the High Risk Investigation Unit or the “rogue unit”; the aims and objectives of the new unit; or who was heading the unit and to whom it was responsible and accountable.

Nhleko said there were no charges yet, saying that one “can’t have charges without investigations into possible violations”.

“We are left with no other option than to seek legal advice and to take appropriate action to defend ourselves,” Pillay and Richer said in a joint statement on Wednesday.

“To date, all investigations that have been instituted against us, either by Sars or other state institutions, have never afforded us a fair opportunity to be heard or to have our side of the story represented.” – News24