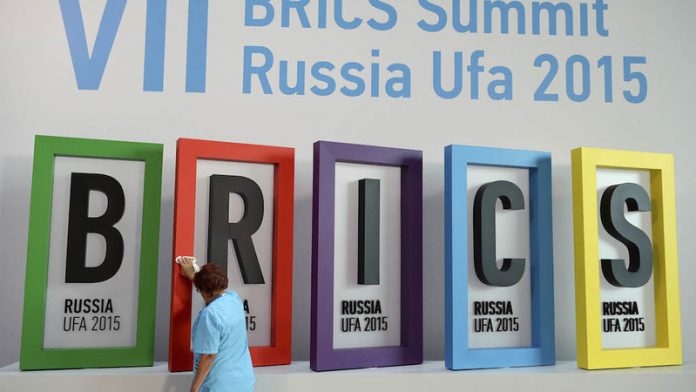 The New Development Bank (NDB) is “open for business”, the treasury said this week, but arguably it could not have come at a worse time for South Africa.

Barely two days after the announcement, Moody’s placed South Africa on review for a credit ratings downgrade, turning up the heat on an economy already in hot water. The ratings agency has South Africa’s debt pegged at two notches above sub-investment grade (junk status).

The government’s commitment to the NDB was made in 2013 under very different economic circumstances, both locally and internationally. The bank must now compete with many other new spending pressures on the budget, including additional funds to cover the cost of no fee increases in higher education for the 2016 academic year.

In this year’s budget, Finance Minister Pravin Gordhan said the government had reprioritised money set aside for other things to make contributions to the bank.

But this is still less than South Africa’s provisions for contributions to the International Monetary Fund (IMF), which will be R89.5-billion in 2018-2019.

Each of the five founding Brics (Brazil, Russia, India, China and South Africa) countries will make an initial subscription of $2-billion to the bank. According to the review, South Africa’s contribution has been scheduled over seven years, with the first instalment of $150-million paid in December last year from the sale of government’s stake in Vodacom.

A number of Brics countries are in the throes of economic woes. Brazil’s economy shrank by 3.8% in 2015, according to data from the IMF, and it is expected to contract by a further 3.5% in 2016. Russia, too, is faced with ailing growth – its economy contracted by 3.7% in 2015 and is expected to shrink by 1% this year.

Moody’s announced on Friday that Russia and 12 other oil-producing countries have been placed on review for a credit ratings downgrade.

The rouble this year hit record lows against the dollar, passing the 80-to-the-dollar mark in January, according to Russian broadcaster Russia Today.

The tough times faced by the Brics notwithstanding, initial capital contributions of $1-billion have been made to the NDB, which is getting into full swing. The bank has already received project proposals from the member nations and will begin an appraisal of the first projects in April, a spokesperson for the bank said.

The bank will focus on infrastructure and sustainable development in the Brics and other developing economies and emerging countries, according to its founding agreement.

In February this year, India’s Economic Times reported that the bank’s president, KV Kamath, said the bank would be “resorting to bond issues and raising local currencies wherever it is feasible”.

Where required, it will supplement these with dollar bond issues, he said, adding that the cost of funds “will be determined by our actual experience in the market”.

“So we will function like a prudent bank should – figure out cost of funds and add appropriate margin and lend. That is the basis on which we will do business,” the paper reported.

This was in line with statements made by the chairperson of the bank’s board of governors and Russia’s finance minister, Anton Siluanov, who said in February that the financing of investment projects will be raised on national currency markets and on international capital markets.

The treasury did not respond to questions about the appropriateness of funding the bank, given South Africa’s current financial constraints.

These challenges are particularly acute for South Africa and Brazil, which were keen supporters of the idea of the bank, according to Lyal White, the director of the centre for dynamic markets at the Gordon Institute of Business Science.

Besides their economic challenges, there is political pressure in both countries on their finance ministries, which are chiefly responsible for promoting the NDB, said White.

“It has become a very secondary thing to consider for both these countries,” he said.

Brazilian President Dilma Rousseff’s government, which is involved in an enormous corruption scandal, did not want to lose favour with its supporters, and Levy’s approach was “more orthodox”, White said.

In South Africa, Nhlanhla Nene was unexpectedly pulled from his post as finance minister in December last year, widely believed to be because of his resistance to political spending demands.

These included the government’s nuclear procurement plans and a last-minute aircraft deal at SAA, which further threatened the stability of the failing airline, not to mention damaging knock-on effects for the fiscus.

The official reason given for Nene’s unceremonious axing was for him to head the bank’s Africa regional centre in South Africa.

The treasury, in its announcement, said the bank is in the process of establishing the centre in Johannesburg.

The bank’s spokesperson said there are nine positions at the director general level open for applications, which include the position to head up the regional centre.

The concept of the Brics group was never a market-driven one, White said, and the plan for a bank began during a period of much better growth for countries such as Brazil.

“But Brazil, Russia and South Africa are in a state of absolute chaos now and none of them actually have the money to put into [the bank],” White said.

China has sufficient reserves, but it also runs its own development bank – the China Development Bank – and in January it led the launch of the Asian Infrastructure Investment Bank (AIIB).

The work of the NDB is intended to complement that of other multilateral and regional financial institutions, and is co-ordinating links with the AIIB, the Economic Times reported. It quoted Siluanov as saying that “certain areas of NDB and AIIB coincided; therefore, we agreed to make sure that the activities of our bank and sister bank should not overlap”.