Cycling is still an uphill battle 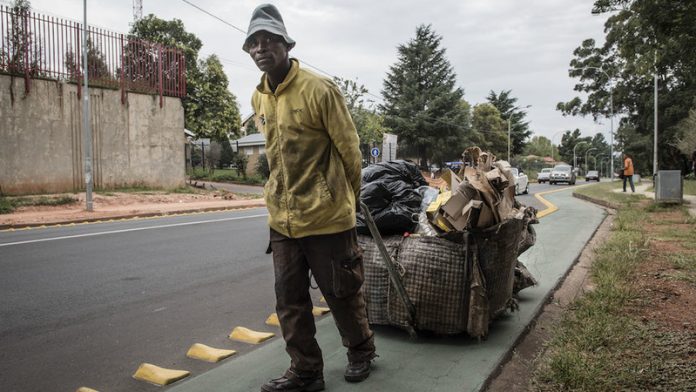 Many commuters in Johannesburg have long dreamt of cycling to work, but would never brave the traffic. The city’s nonmotorised transport project assumes it can make this change.

From mid-2014, cycle lanes were gradually opened from the University of the Witwatersrand’s campus in Braamfontein to the University of Johannesburg in Auckland Park and, to my surprise, along the 4km route I drive to work.

Thanks to slow progress, there were 12 months to make up my mind and prepare for a radical change in commuting habits. What would it be like to cycle this route?

In parts, the pavement is less than half a metre wide. Already during construction, pedestrians were stepping into the cycle lane. Impatient drivers, not only at the steering wheels of minibus taxies, discovered its utility for bypassing traffic, two wheels on the pavement where necessary. For others it became a convenient place in which to stop and wait. When interviewed on SAFM, one such driver commented: “For now, I don’t see any bicycles.”

Would this be different once I started cycling?

My way to work goes through Fietas (or Pageview, its official name since the 1940s), an area with a rich and tragic history, and marked today by socioeconomic deprivation and crime. For years I kept my car doors locked, windows wound up, constantly aware of my surroundings. The main intersection at the bottom of Fietas is known for smash-and-grabs. Perpetrators scale a bridge and disappear into the cemetery.

Four cemeteries flank this route. While stuck in traffic, I would noticed their palisade fences being dismantled piece by piece, no doubt sold as scrap metal along with the night’s pickings of cables and water meters. The palisade remained intact only in a section protected by a tight-knit wire fence, security guard and dog kennel.

Kitting up for the new commute was a distraction from pondering the risks of the route. A mechanic took three weeks to service my bicycle, but there was no hurry. The cycle lane construction slowed down with news of protests over demands for local labour sourcing. Unemployment is rife in the areas the lanes traverse.

A cycle shop advised on the safest helmet. Next were front and rear lights, a key pouch, padded bicycle gloves and an old-fashioned bell.

The cycle lanes were receiving their final touch of green paint. I had watched yellow plastic cobbles, which separate bikes from motorised traffic, being drilled into the tar one by one all the way except at intersections. Here, the cyclists are left to their own devices.

Johannesburg City Parks and Zoo piled up grass sods for the finishing touch along my route, with its new signature red steel pillars planted like oversized fingers. The smaller ones, placed next to concrete benches, are cycle stands – a thought for that much-needed rest halfway up the Brixton hill.

In seeming ignorance of the illicit recycling tendencies, new metal bins were placed at frequent intervals. But the nonmotorised project also includes a live-monitored CCTV system, 360° cameras placed on poles at every bend and intersection. This might have displaced the nocturnal metal thieves, because the half-dismantled cemetery palisades have now stood frozen for several months.

The remaining palisades remind one of a fence that once protected people who rest under ancient trees. As often reported in the Northcliff Melville Times, grave vandalism is rife. The missing palisades also invited illicit dumping of rubble.

But now for the ride to work. It’s a different routine from unlocking the car boot to store my bag, then locking myself in my car, fastening the seatbelt, pressing the remote, which opens a metal palisade gate, reversing out and making sure it’s securely closed before I head for the traffic.

Instead, I’m giving the bicycle’s tyres a few pumps of air, squeezing my hands into the cycle gloves, strapping on my helmet and stepping into the street with two wheels at my side as the gate slams into its latch.

I’m on my bike and feel free. Of course, it’s an illusion. I breeze past the traffic, I’m in the fast lane, it’s downhill most of the way, a guaranteed 15 minutes until I’m in my office.

Do the drivers wish they were cycling? Most don’t live close enough to make this a viable alternative. The route takes traffic from Roodepoort and beyond, some sitting in their cars for more than an hour before hitting the gridlock through Fietas.

When they witness my close shave with a truck making an impulsive turn to the left, I assume they are grateful to be in a car.

I find myself navigating not only impulsive and impatient drivers but also cars parked in the cycle lane, domestic wheelie-bins lined up for the Pickitup truck and pedestrians deafened to my bell by their headphones.

The lanes are also used by waste recycling trollies, often pushed uphill or freewheeling down on the wrong side of the road as they feel safer heading into the traffic. They sorely need the protection that the lane offers. At the large intersection where I wait at length for a gap in the slip lane, an abandoned trolley reminds me of waste pickers’ daily threats. Its contents, a full day’s labour of glass collection not salvaged by anyone else, lies flattened into a myriad splinters. Did the owner end up in a public hospital or morgue? Did the CCTV system monitor the incident, were Johannesburg Metro Police Department patrol vehicles alerted and able to respond?

As I freewheel down the hill or slowly make my way back up, I come face to face with waste recyclers, pedestrians, commuters piling in and out of taxis, beggars, schoolchildren, pensioners going to a soup kitchen, an upholsterer displaying his wares … We exchange nods, a thumbs-up or smile, sometimes a word or two. Spotting a cyclist is still an event.

Understandably, some taxi drivers display irritation: Why are there cycle lanes but still no dedicated taxi lanes or stops on this route?

On the Wits campus I cross the M1 highway on a pedestrian bridge and am dizzied by the traffic below. A few carefree moments and I’m at my building. I’m late and wheel my bike into a meeting room. There’s a welcoming applause.

But that novelty wears off and it has to. Seven academics in our school now commute from different directions, some without cycle lanes, some battery assisted, one with a baby seat and each with a story to tell. My best is when I’m caught up by a former student and long-standing cyclist. He rides beside me for a catch-up chat (my eyes are on the kerbstone). This chance encounter makes my day.

Marie Huchzermeyer
Marie Huchzermeyer is an academic and public intellectual at the School of Architecture and Planning at the University of the Witwatersrand in Johannesburg, South Africa.
Facebook
Twitter
WhatsApp
Linkedin
Email
Telegram