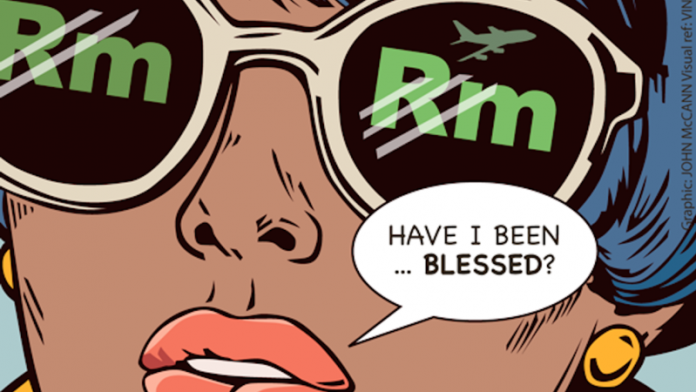 It once used to be that the word blessed, along with its derivatives, had hallowed connotations. Not entirely so these days, especially in black urban circles where “blessers” are a hot topic of conversation and all the rage.

But what is a blesser? He’s a new version of the sugar daddy, except his spending power puts him on a much higher pedestal, giving him a god-like status of sorts. And when you date one, it is said you literally feel like your life has been blessed. Fiscally, at least.

The past two decades since the advent of democracy has seen a steady mushrooming of nouveaux riches in the black community. Black economic empowerment, political connections and better opportunities have monetarily emancipated a number of black men.

And what’s one of the things that some of these moneyed men like to do? Bless their women financially with shopping sprees, overseas trips, pricey pampering sessions – you name it.

Level one blessers – because there are levels to this thing – will even set you up with property, flashy cars and maybe even hook you up with some business opportunities.

No wonder sugar daddies – who generally only provide pocket money, groceries and airtime – are no match for blessers.

Certain educated women of all ages hop on the blesser train and move in blesser circles where the blessed socialise among themselves and compare lifestyles. It’s a birds-of-a-feather type of thing, you see, and a joke doing the rounds is that blessers are the main reason why the air route to Dubai and back is so profitable – everybody knows that blessers love to spoil their women with trips to the United Arab Emirates. It’s their number one preferred overseas destination.

But these blesser circles can be a bit problematic. For one, the blessed women compete with each other on the sly because this one wants to be more blessed than that one. And it’s no longer just enough to show off how blessed you are among your contemporaries: now we have Instagram where you can pretend to pose innocently in some foreign location while hashtagging “blessed” along with every designer label you’re wearing from head to toe. Yeah, we see you.

What we often don’t see are the pictures of the blessers because sometimes they are other women’s significant others or your friends’ fathers.

It has been said that a man’s weakness is a beautiful woman whereas some women’s weakness is the “blessed” lifestyle that money can buy. Obviously this is a generalisation and there are exceptions to every rule, but apparently the latter is why certain men with money, regardless of how they look, are commonly involved with certain attractive females. And vice versa.

In essence, they are fulfilling each other’s needs and fantasies in those generalised terms. Those of us who live in or frequent the northern suburbs of Johannesburg, for instance, see this all the time. It’s become a way of life because everybody knows that the northern parts of this city are Blesser Central, so to speak. This is where the blessers live, work and play so it’s to be expected that those looking for blessings use this as their hunting ground, because why pay for anything when you can find a blesser to bankroll your lifestyle for you?

There are way too many wannabe social climbers selling their souls and discarding their morals for designer shoes and handbags, not to mention Instagram likes. And way too many men using their money as a control mechanism to prey on women blinded by the finer things in life.

Many of these men have a sense of ownership and entitlement over their “blessed” women. I’ve come across women in abusive and unfulfilling marriages and relationships who are unwilling to leave these men because that would compromise the flashy lifestyles they’ve become used to. There are also cocky men who will unashamedly tell you they cheat on and beat their women, yet make it up to them with expensive gifts. This is the sad reality we live in.

From the outside, the blessed life looks very appealing and it can be rewarding in many ways. But it often comes at a cost – be it your freedom, dignity, or physical, emotional or mental wellbeing.

Yet many are not willing to give it up. Have we become so enslaved by money, appearances, material things and the need to project fake realities that we are willing to forgo our self-worth and discard our moral fibre?

In the end, only the “blessed” women can decide what works for them, what doesn’t and how far they’re willing to go to get the things they want. And I suppose I’m not off the hook until I answer the most obvious question: Am I blessed? In this “blessed” age’s terms, no. In traditional terms, yes, I think so.

Nelly Shamase is a regular contributor to the Mail & Guardian

No romance without finance — a playlist