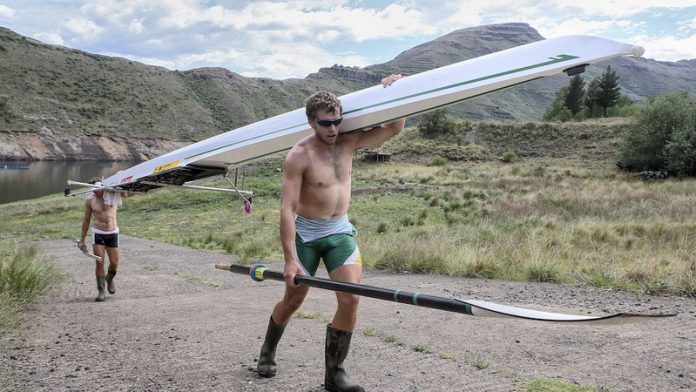 This is traditionally a twitchy time of year for Olympic contenders, and heavyweight rower Lawrence Brittain is no exception. He, his fellow 19 Rio hopefuls and a support staff including a hard-working cook, have been camping at the Katse Dam in Lesotho these past few weeks and will be doing so until March 20.

After that comes the great winnowing, when some hard selection choices will be made. The selected crews come back to the Katse Dam for a period, after which they start competing in Italy in the early European summer. Still on the horizon at that point – but creeping ever closer – is the summer Games and what the rowers have been spilling blood for.

“The energy in our team is awesome at the moment,” says Brittain. “Obviously there is some tension as there are still some selection battles going on but we haven’t lost sight of the goal, which is success at Rio. The upwards-and-onwards attitude of our team pushes everyone to raise their standard and keep hungry for those medals.

“Although you can lose track of time up in the mountains, the days have their rhythm,” says Brittain, the scion of an admired and well-respected rowing family. “All the days up here consist of three things in substantial quantity, that is: training, eating and sleeping,” he says by email. “We train two to three times a day, usually with two water sessions and then some running, ergometer [rowing machine] work and Rocky Balboa-style gym thrown on top of that.”

Many of Brittain’s mates have a tale to tell, but his is by far the most heart-rending. After he had felt fatigued and under the weather for months, in October 2014 he was diagnosed with Hodgkin’s disease, a form of lymph-node cancer. It set him back very badly. The former world under-23 rowing champion missed out on a possible medal at the 2014 World Championships and it was touch and go whether his career would resume.

But resume it did. From a gentle start, when he was told not to push his heart rate above 120 as he exercised gingerly on the training bike, so the workload increased and the challenges mounted. Even the hair grew back, with photos coming back from Lesotho showing Brittain in hirsute splendour, all mad curls and big ’burns.

Asked how he was feeling after the cancer, he said: “I am feeling amazing at the moment. I only started my return to rowing a year ago on last year’s March camp, so I have come a long way. I am stronger than I have ever been, pulling PBs [personal bests] in all the training and trials, and I keep getting faster without the cancer keeping me back.”

After observing the unvarying eating, sleeping, training ritual, there isn’t much to do but to watch the level of the dam. Brittain and comrades are staying in the barracks built for the original workers and engineers on the dam and he says that even a walk to the local spaza shop is a slight anticlimax because supplies are limited.

That said, the spirit is good and the prospects for a stellar year are improving every week. The cook is busy (a quick meal before the early session and then three more meals throughout the day) and Brittain relaxes by playing PlayStation games. “Shooting zombies is a great way to pass the time, otherwise we’re watching movies and, of course, there’s plenty of sleeping,” he says.

You could say that Brittain has been shooting zombies of one form of another for a few years now, zapping them with sheer bloody-mindedness and strength of will. The lightweight men’s four winning gold at London in 2012 has established a tradition of excellence in South African rowing and, though the public don’t know much about the sport, there is a mountain of expectation ahead of Brazil. Brittain may yet be involved in deepening that tradition.