Democracy is a joke, says China – look at Trump 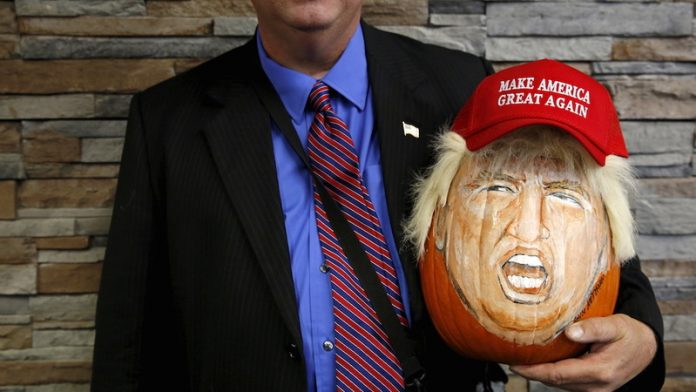 When there is upheaval within China’s borders – riots, protests, vicious political power struggles – hardly a sniff of it will be found in the pages of the country’s heavily controlled press.

When it happens elsewhere, and particularly when it underscores the perils and pitfalls of democracy, it becomes frontpage news.

Such is the case of Republican presidential frontrunner Donald Trump, who, for China’s authoritarian rulers, has become the latest example of how allowing the masses a say in choosing their leaders is a bad idea.

“The rise of a racist in the United States political area worries the whole world,” the party-controlled Global Times crowed this week. “He has even been called another Benito Mussolini or Adolf Hitler by some Western media.” It added, darkly: “Mussolini and Hitler came to power through elections, a heavy lesson for Western democracy.”

Trump has been a gift to communist party spin doctors paid to convince the country’s 1.4-billion citizens that rule of the people is a sure path to chaos and destruction.

“They are relishing this moment,” says Zhou Fengsuo, a United States-based democracy activist who fled his native China following the deadly 1989 Tiananmen crackdown. “They are very happy. They are laughing over this.

“To them [Trump] is a good character to show the deficiencies of the democratic system, that such a person could become president. It is just unbelievable. Beijing is definitely gloating over this.”

Nick Bisley, a professor of international relations and executive director of La Trobe Asia university, says the rise of such a divisive politician provided perfect ammunition for the rulers of one-party China to argue that democracy was bad not just for it but also for the world.

“It produces buffoons. It’s carnivalesque. It is decadent,” Bisley says. Trump “fulfils in a lot of respects the stereotypes of this capitalist boss figure: a decadent Westerner who shoots off with his mouth and fires off all sorts of racist, crazy comments”.

Chinese newspapers, which have previously pounced on the Arab Spring and Ukraine’s Maidan revolution as evidence of the dangers of democracy, have wasted no time in hyping the potential turmoil that Trump’s rise could bring.

An editorial in the Chinese-language edition of the Global Times noted with glee that fighting had broken out at Trump rallies in what was supposedly one of the world’s “most developed and mature democratic election systems”.

The fairy tale surrounding Barack Obama’s 2008 election had been shattered, the Beijing Review magazine argued in a recent story. Instead, Trump’s rise had transformed the presidential race into “an unprecedented joke”.

Even China’s leaders have joined in, albeit in less rambunctious terms. The fight for the White House had been “lively”, Premier Li Keqiang quipped at a press conference in Beijing on Wednesday.

Trump’s portrayal of the 1989 Tiananmen massacre as a “riot” will have endeared him further to Beijing. China’s leaders sought to justify their decision to use violence to crush the pro-democracy protests by claiming they had been facing a “counter-revolutionary riot”.

On a superficial level, says Bisley, Beijing would be ecstatic at the emergence of a “buffoonish, clownish, evil boss”, who captures the “chaos of democracy” so well. But on a deeper level there will be serious concerns in China’s corridors of power about the prospect of having to deal with a Trump administration.

“But if you fast forward – let’s imagine he wins, which I still think is unlikely, but is plausible in a way it wasn’t a few months ago – if you are a Chinese state councillor or in the foreign ministry dealing with an America run by Trump, it is going to be really unpredictable.”

For now, though, China’s party-controlled media is still revelling in the rise of the man it calls “big mouth” Trump.

“Even if Trump is simply a false alarm, [it] has already left a dent,” the Global Times bragged this week. “The US faces the prospect of an institutional failure, which might be triggered by a growing mass of real-life problems.”

An editorial on another government-run website claimed Trump had “humiliated” the country’s political system. “He has turned the election into a prank,” it said. – © Guardian News and Media 2016