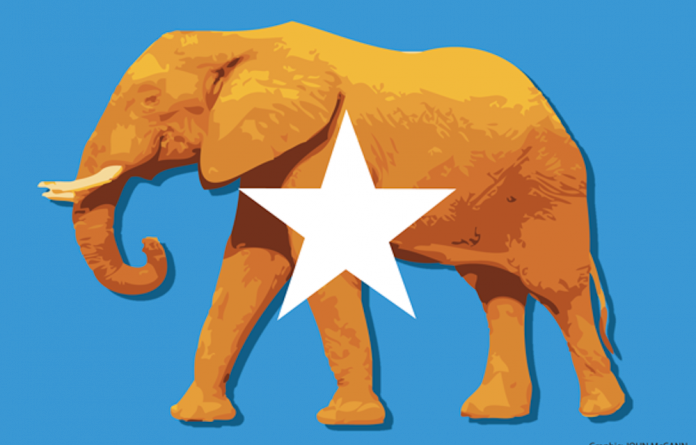 A lone male elephant named Morgan has surprised conservationists after walking 220km from Kenya to Somalia. The animals have rarely been spotted in Somalia in the past 20 years because of the country’s civil war.

Morgan, who is in his 30s, was wearing a collar, which allowed conservationists to track his three-week trek northwards.

Some reports called it the first confirmed sighting of an elephant in Somalia since war broke out in the 1980s, although Al Jazeera quoted Somalian authorities in September last year saying elephants, lions, leopards, giraffe, buffalo and ostriches have previously crossed the border at the same point that Morgan did.

“Out of all the tracking we have done in Africa, these movements – and these circumstances – are exceptional,” said Iain Douglas-Hamilton of the Save the Elephants organisation.

“The wandering of this one bull across the entire expanse of Lamu district, from the Tana River to the Somali border – no one has seen anything like this before.”

Morgan left the Tana River delta in Kenya in mid-February and arrived in Somalia early this month.

The Somali civil war has not only displaced thousands of people but also wildlife.

When people were fleeing to refugee camps in Kenya, Ethiopia and elsewhere, many animals, especially the Big Five (lion, elephant, buffalo, leopard and rhinoceros), migrated to that country’s game reserves.

Apart from conflict, animals in Somalia such as elephants suffered from poaching, which was used by militants as a source of income.

The southern part of Somalia was a sanctuary for the Big Five before the collapse of the central government in 1991. The region is arable, whereas the rest of Somalia is arid and semiarid, and the country’s two largest rivers, the Juba and Shabelle, pass through the area.

But that same area was one of the most lawless, under the control of the militant group Al-Shabab, which was displaced by Somali government forces backed by Kenya.

Many people received the news of the elephant’s trek with joy, with commentators on social media suggesting Morgan’s short sojourn in Somalia was a sign of stability returning to the country – even though the elephant spent less than 24 hours in Somalia before heading back to the Tana River delta. – globalvoices.org