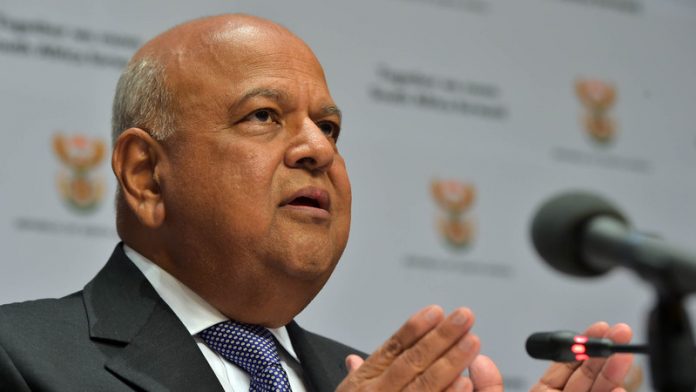 South African Finance Minister Pravin Gordhan said he will answer questions from a specialized police division regarding the establishment of a unit of the national revenue service during his tenure as head of that agency.

Gordhan said in an e-mailed statement the establishment of the unit was legal according to his legal advice and he is answering the questions even though he does not believe he is obliged to.

The dispute between the minister and the police unit, known as the Hawks, is part of a political struggle for control of the National Treasury, analysts including Pierre de Vos, a law professor at the University of Cape Town, have said. While Gordhan has asked for the head of the revenue service to be fired, President Jacob Zuma has not acceded to his demand. – Bloomberg

The statement has also been added below.

MEDIA STATEMENT
MINISTER OF FINANCE RESPONDS TO THE HAWKS

I have responded to the questions sent by the Hawks and I wish to state the following:

a. My legal advice is that I am not obliged, under any law, to answer the questions sent to me by the Hawks but I believe it is in the public interest that I provide them with information I have at hand. Be that as it may, as a law abiding citizen I have decided to co-operate fully

b. My legal advice is that the establishment Unit was lawful

c. I am advised that the Sikhakhane Panel finding that the establishment of the Unit contravened the National Strategic Intelligence Act was wrong and based on a superficial and clearly mistaken reading of the aforementioned Act

d. The Unit was an essential part of SARS’ enforcement strategy as it is with most tax and customs administrations globally

e. As far as I was aware, the unit lawfully performed its functions

f. As far as I was aware, the funding of the unit was done through normal budgetary processes applicable to SARS.

ESTABLISHMENT OF THE INVESTIGATION UNIT

In respect of the legality of the investigation unit established during my time as Commissioner of the South African Revenue Service, I believed that the Unit was lawfully established to perform very important functions for and on behalf of SARS.

The unit did not initially have a name but was later successively known as the Special Projects Unit, the National Research Group and the High-Risk Investigations Unit. I participated in the decision to establish the Unit in February 2007.

BACKGROUND TO THE ESTABLISHMENT OF THE UNIT

In terms of Section 4 (1) (a) of the SARS Act, “SARS must “secure the efficient and effective, and widest possible, enforcement” of the tax laws listed in Schedule 1. Those tax laws have always vested SARS with wide powers for the investigation of tax matters including the investigation of crimes with tax implications.

The wide scope of these powers is apparent from,

The Unit’s establishment was in line with government’s commitment to crack down on crime generally and organised crime in particular. This commitment was expressed in President Thabo Mbeki’s State of the Nation address on 9 February 2007.

It became apparent to SARS that it had to enhance its capacity to gather intelligence (departmental intelligence) and investigate organised crime related to tax and customs legislation (for example cigarette smuggling). SARS decided in about February 2007 to set up the Unit to penetrate and intercept the activities of tax and customs related crime syndicates. Its initial intention was to employ and train the members of the Unit and then to transfer them to the National Intelligence Agency (NIA) where they would continue to function as a unit dedicated to SARS. The NIA, however, lost traction for the project as a result of which SARS decided to retain the Unit within its Enforcement Division but with an appropriate mandate.

LEGALITY OF THE UNIT

I am advised by my legal team that the Sikhakhane Panel was mistaken in its conclusion that the establishment of the Unit had contravened section 3 of the National Strategic Intelligence Act 39 of 1994. In its report on 5 November 2014, the Panel also said section 3 “prohibits the conducting of covert intelligence gathering by structures other than the National Defence Force, the SAPS or the State Security Agency”.

SARS is clearly not such a department. It was never engaged in national security matters. It is accordingly not subject to the prohibition.

My legal team has found that the establishment of the Unit did not contravene section 3 of the National Strategic Intelligence Act and its activities were not subject to the provisions of section 3 at all.

THE UNIT AS PART OF SARS’ ENFORCEMENT STRATEGY
This unit was part of the broader enforcement division of SARS – similar to the enforcement capabilities required in any tax and customs administration in the world. In the South African societal and economic context, SARS had developed a compliance approach which consisted of good service to the compliant taxpayers, increased education about the importance of paying tax to those entering the economy, and different types of enforcement being utilised on the non-compliant taxpayers depending on the level of non-compliance.

Non-compliance could include non-submission of a tax return, incorrect information on a tax return, different types of debt collection, aggressive tax avoidance, abuse of trusts, tax evasion, smuggling across borders, cigarette and other forms of illicit trade, trafficking of drugs, round-tripping to avoid excise duties and VAT etc.

Enforcement actions are more effective when they are guided by good risk assessments and information from various stakeholders. Relatively few staff are engaged with risk assessments – some twenty-odd in the instance of the unit in question. It is in this context that the unit was core to the effectiveness of SARS to carry out its mandate of collecting revenue so that government can have the resources to fulfil its objectives.

ACTIVITIES OF THE UNIT

During my time as Commissioner, the chief executive officer of SARS, the Unit employed 26 odd people, a miniscule part of the 15 000 staff compliment of SARS. My knowledge of the Unit’s day-to-day operations was consequently very limited. As far as I was aware, the Unit lawfully performed its functions. I was not personally involved in the recruitment of its members but I am told that the process was in accordance with SARS policy. If it or any of its members engaged in unlawful activities then they did so without my knowledge or consent. I have no knowledge of the operation code-named “Sunday Evenings”.

BASIS FOR THE HAWKS QUESTIONS

The Hawks declined to answer my questions seeking clarity on what offence they were investigating and by what authority they were acting. They merely referred me to the powers conferred to them by chapter 6A of the South African Police Service Act 68 of 1995. None of the provisions of chapter 6A entitle the Hawks to demand answers, set deadlines and threaten me with retaliation if I fail to respond. The deadlines and threats of retaliation were accordingly unlawful.

These are challenging economic times in South Africa and in the world. Our biggest challenge as a nation is to ensure that we are able to grow this economy so we can create jobs for our people and make inroads in addressing poverty. That is the work I would like to focus on with the National Treasury team.

SARS is an important fiscal institution. We cannot afford to let this key institution be distracted from its core mandate of revenue collection. The institution and its 15000 or so employees are a crucial pillar of our democracy. Let’s all defend this critical institution.

Issued on behalf of the Ministry of Finance