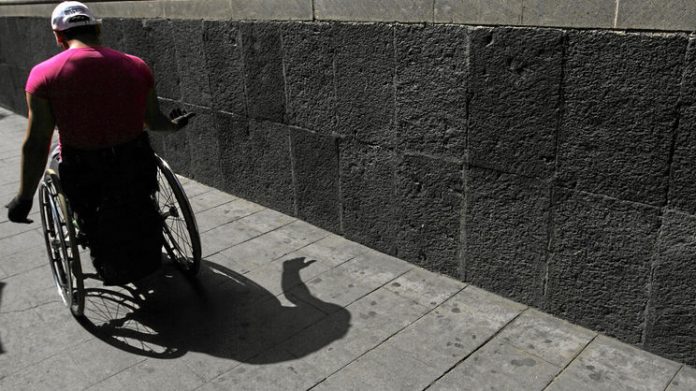 U.S. researchers announced Wednesday the invention of a brain implant that allowed a man with paralyzed arms and legs to restore his finger, hand and wrist movements using his thoughts for the first time.

Researchers from the Ohio State University, Battelle Memorial Institute and Feinstein Institute for Medical Research developed the tiny computer chip called NeuroLife and implanted it in the brain of 24-year-old Ian Burkhart, who was paralyzed due to injury of the upper spinal cord in a diving accident six years ago.

The device combines algorithms that learn and decode the user’s brain activity and a high-definition muscle stimulation sleeve that translates neural impulses from the brain and transmits new signals to the paralyzed limb, they reported in the British journal Nature. It works by interpreting thoughts and brain signals, then bypassing his injured spinal cord and connecting directly to a sleeve wrapped around the patient’s arm to stimulate the muscles that control Burkhart’s arm and hand.

In clinical tests, Burkhart was shown to grasp and swipe a credit card or play a guitar video game with his own fingers and hand. He also was able to grasp a bottle, pour its contents into a jar and use a stick to stir the contents of the jar, or pick up and hold a phone to his ear. “We’re showing for the first time that a quadriplegic patient is able to improve his level of motor function and hand movements,” said Ali Rezai, a co-author of the study and a neurosurgeon at the Ohio State’s Wexner Medical Center.

Burkhart received the implant of the computer chip, which was smaller than a pea, during a three-hour surgery in April 2014. He first demonstrated the neural bypass technology two months later, when he was able to open and close his hand simply by thinking about it.

Innovations for medical research
“During the last decade, we’ve learned how to decipher brain signals in patients who are completely paralyzed and now, for the first time, those thoughts are being turned into movement,” said study co-author Chad Bouton, who directed Battelle’s team before he joined the New York-based Feinstein Institute for Medical Research.

“Our findings show that signals recorded from within the brain can be re-routed around an injury to the spinal cord, allowing restoration of functional movement and even movement of individual fingers.”

This technology, according to the researchers, holds the promise to help patients affected by various brain and spinal cord injuries such as strokes and traumatic brain injury to be more independent and functional.

“We’re hoping that this technology will evolve into a wireless system connecting brain signals and thoughts to the outside world to improve the function and quality of life for those with disabilities,” Rezai said. “One of our major goals is to make this readily available to be used by patients at home.”

The researchers, who planned to test the device in five patients, said they have identified a second patient who is scheduled to start the study in the summer.

“Participating in this research has changed me in the sense that I have a lot more hope for the future now,” Burkhart said. “I always did have a certain level of hope, but now I know, first-hand, that there are going to be improvements in science and technology that will make my life better.” – Xinhua

The smartphone is a crucial tool for enabling lifelong learning and has the potential to democratise education, particularly with internet penetration and access to data both continuing to rise
Read more
Friday

Curating the End of the World deploys Afrofuturism to respond to Covid-19, anti-black violence and capitalism
Read more
Opinion

With doctors in short supply, healthcare employers need to invest in intelligent technologies to make the experience of accessing healthcare as good as it can be, for all involved
Read more
Education

Traditional universities must adapt or die