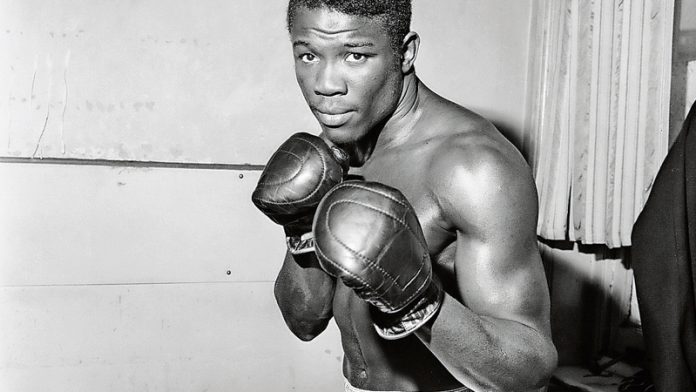 Boxing, like most areas of life, has had its share of gay men who have had little option but to keep their sexuality incognito. Some reached the citadels and, with a handful, titillating snippets escaped the press embargoes. There was the brilliant world bantamweight champion, Panama Al Brown, who had a fling with the French filmmaker Jean Cocteau, and Freddie Mills, Bournemouth’s brawling world light-heavyweight champion, who travelled to Johannesburg to flatten one South African heavyweight champion and have an affair with another.

But none are as celebrated as Emile Griffith, who won six world titles in three weight divisions and is widely regarded as one of the greatest welterweights of them all.

Donald McCrae, whose exhaustive research allows him to write with the confidence of a personal witness, weaves the story of the rise and fall of Griffith’s boxing career with tales of the pugilist’s traumatic early years in the Virgin Islands, his voracious sex life around the bars of New York’s Times Square, the complexities of his family relations, and all the heartache of being one thing and another.

For Griffith, the defining moment came in 1962 when he challenged his old rival, Benny “Kid” Paret, in a bid to regain his world title.

Paret called him a “maricon” (“faggot”) and what followed was interpreted as Griffith’s revenge. In the 12th round he cornered the Cuban and rained punches on his head until he collapsed and died – an outcome that haunted Griffith for the rest of his life.

One of those who reached out was the Lebanese-South African, Willie Toweel, whose career Griffith ended in 1960. Toweel had killed a man in the ring four years earlier and, like Griffith, struggled to come to terms with it. He wrote the first of several letters to his former conqueror about how he’d learnt to forgive himself, and said that Paret’s death wasn’t Griffith’s fault. This had a huge effect on the distraught world champion, who resolved to carry on punching men’s heads for a living.

But like so many before him, Griffith lingered far too long. One of those late-career fights took him to Soweto to get outpointed by the local hero, Elijah “Tap-Tap” Makhathini, and there to welcome him was Toweel, who referred to him as his “brother” while acting as his host during this 1975 boycott-breaking visit.

But government policy did not allow Griffith’s white trainer, Gil Clancy, to enter Soweto. The boxer reacted by saying he opposed apartheid and would go home unless they backed down. Eventually, Piet Koornhof, the sports minister, buckled, prompting Toweel to quip: ‘‘Scuse my language, but, boy, that was one helluva ­knockout punch.”

Eventually, when pugilistic dementia was taking root, Griffith reconciled with Paret’s son and he also dropped his guard about his sexuality: “I keep thinking how strange it is,” he remarked in 2008. “I kill a man and most people understand and forgive me. However, I love a man and many say this makes me an evil person.”

A Man’s World is a compelling tale of triumph and despair. It is packed with pathos but ends on a hopeful note. Griffith died in 2013, a year after the Puerto Rican world title challenger Orlando Cruz became the first-ever professional boxer to come out as gay while still active – a stand applauded even in boxing circles, and then forgotten.