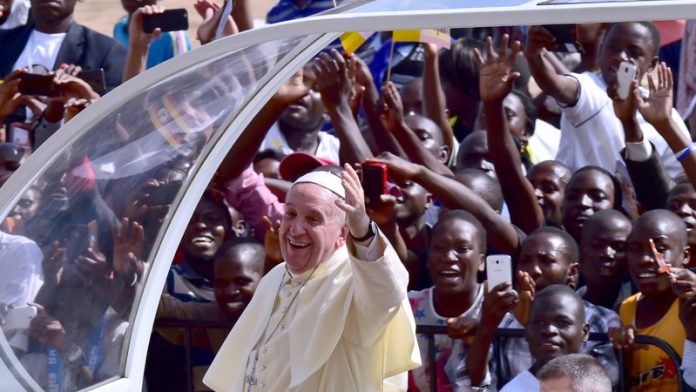 Hot water, a plate of lasagne, the pleasure of a walk and a night of peaceful sleep. Then a breakfast with coffee, milk, bread and jam.

Twelve Syrian asylum-seekers woke up to a new world in the heart of Rome on Monday, in the bustling neighbourhood of Trastevere, which has become their temporary new home after Pope Francis took the three Muslim families, comprising six adults and six children, with him following his brief visit to Lesbos last weekend.

Standing before an Italian language centre in the Vatican-sponsored charity complex Sant’Egidio, where the refugees are being housed temporarily while they await longer-term accommodation in the Vatican, is 31-year-old Hasan, who recounted to journalists his harrowing journey from Damascus to Lesbos, and the surprise he felt after being told he was heading to the Eternal City.

“Here, it is a big dream. I think all the refugees there, in Greece, maybe in Macedonia and Greece, deserve the right to come here and stay here. Not specifically here, I mean a safe country like Italy,” he said.

Hasan said he felt compelled to leave Syria with his wife and two-year-old son for many reasons, but that his call to join military service was the final impetus.

His escape from Syria included a seven-day detention by the Islamic State, which held him in Aleppo before he was able to convince a smuggler to get him to Turkey. From there, he paid another smuggler to get his family to Greece.

Asked about his first impressions of Rome, he broke into a smile. “This is the seventh interview today,” he said.

Sant’Egidio said the families were chosen because their paperwork was ready, the community wanted to aid families seeking asylum and because, as Syrians, they were clearly fleeing war. Asked why the leader of the Catholic Church had chosen Muslim families, Daniela Pompei, who heads refugee services at Sant’Egidio, said religion was not an issue.

Now, the families are beginning a new journey: an asylum application in Italy, language lessons and integration into a new culture.

For most asylum seekers, it is a difficult transition in a country where – as one asylum seeker living in Italy, who asked not to be named, said – there are few, if any, services for new refugees. Many refugees and aid agencies have expressed frustration at the long waiting times in Italy, with some waiting up to two years, as well as restrictions that forbid them from seeking employment.

For now, Hasan and his wife, who was an atomic scientist in Syria, and their family will essentially be cared for by the Vatican charity. An official at Sant’Egidio said the first step towards integration would be teaching the new arrivals Italian.

“The need for language is a primary necessity, because it is necessary for communication, for relationships, for a life,” said Pompei. “The knowledge of language is a key to enter the world.”

The decision to bring the three families from Lesbos to the Vatican came eight months after Francis made a plea for every religious community across Europe to offer shelter to migrants in their places of worship. For Catholic parishes, he said, such an act would be seen as a “concrete act of preparation” for the jubilee year of mercy, which began in December.

Giancarlo Perego, the manager of a church-affiliated refugee charity, said that about 23 000 of a total of 105 000 refugees in Italy were now being housed in church facilities across 200 Catholic dioceses.

The Syrians’ arrival received a mixed response in Rome, with people appearing to hold nothing against the families, but noting that broader problems needed to be addressed.

“Those 12 are fortunate. It’s not right for the others, but I am for welcoming people,” said one shop worker, describing the thousands of other refugees who also risk their lives to reach European shores. “I’m in favour of helping people.”

A bar worker described the atmosphere in Rome as “a bit angry”. He said people in Trastevere were not against the 12 chosen by the pontiff, but that other problems in Italy were not being addressed. – ©?Guardian News & Media 2016