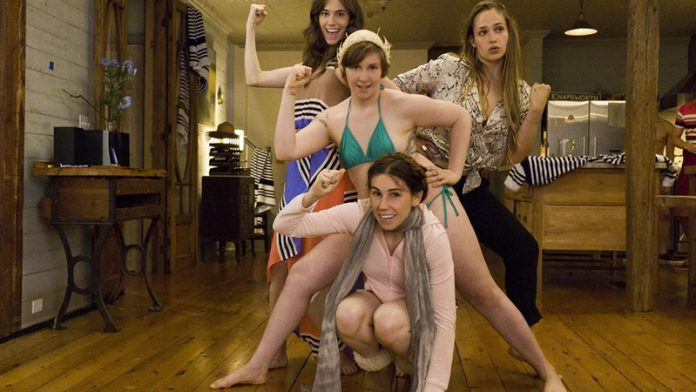 I’ve followed the series from the beginning and have loved it through its erasure of a black Brooklyn, through its rabid self-indulgence and through its representational shortcomings, which I justified by accepting the fact that this young writer is doing something that I’ve struggled to master: she writes purely, and furiously, from inside her desires as a writer – not bonded to or obsessed with issues of identity, things I often find myself cornered and confounded by.

Dunham’s approach is unequivocally influenced by her being a Lean In, Hillary Clintonite kind of white feminist, the type who has eye-rollingly sincere relationships with politically conscious and smart African-American friends, transgender friends, crip friends (a subculture of people with physical disabilities) and, of course, the very powerful heterosexual men of Hollywood.

These are things that make me like her for her efforts to engage with worlds outside her own, but that also make me think there might be an insincerity there, propelled by today’s need to tick diversity boxes in a perpetual steeplechase to be and stay cultishly intersectional. But I respect her as a writer. I am also very jealous of her.

I am jealous of the fact that in Dunham’s work, through her writing, in the way that she writes, in the beautiful misery of the characters she has created in Jessa Johansson, Shoshanna Shapiro, Marnie Michaels and Hannah Horvath – names so fictional and preposterous – she has disassociated her white women, and essentially herself, from only being sexual objects or forms of property. In a way she, and they, exist in their own comedic dimension.

I thought about her freedom as a writer after a round-table discussion about gender and visual culture that included professors Z’étoile Imma and Nicole Fleetwood and Dr Danai Mupotsa, three enormous brains inside black women. We were all stumped by a simple question posed by Imma: “Can a black women’s representation in visual culture be disassociated from her historical position as a sexual object or a form of property?’’

I feel an almost criminal joy when I watch Girls, as if I’m betraying a hardcore part of myself, and I wonder: Has white feminism travelled that much further than the place where I, as a black woman writer, find myself, am historically forced to wrestle with oniony layers of identity politics in myself and therefore my writing? I find myself consciously conjuring carefreeness instead of just being carefree.

What does it mean to be a free writer? Am I a free writer if I have to choose between writing outside the paradigms of history, writing for writing’s sake, writing away from these heavy issues, writing like Octavia Butler and writing with the responsibility of unpacking issues of identity for “the people”?

This question has plagued the mind of many a black writer and even more artists who can’t seem to escape the paradigms of where history has placed them, in a place where we always have the burden of being responsible with our craft.

In a Chimurenga radio conversation between Zimbabwean cultural critic George Shire and the Otolith Collective’s Kodwo Eshun and Anjalika Sagar, who are in studio to discuss the work of late Zimbabwean novelist and poet Dambudzo Marechera, a similar discussion ensues.

They play a clip of Marechera talking about the categories of African writer: the traditionalists (Chinua Achebe and Ngugi wa Thiong’o), who write about rural life, and the modernists (Wole Soyinka, Ayi Kwei Armah and himself), who write about urban life.

The modernist group, he says, are “always accused of intellectualism, of having been influenced by European writers and using European techniques.

“Through the sheer internationalism of their work, they are said to be not part of the decolonisation process.”

Marechera continues: “The traditionalist group is the one that is strongly approved of in Zimbabwe because their writing is very moralistic; it’s easily used in schools as textbooks. And also, in terms of Ngugi … I like his works but he disturbs me only about one thing: he believes that writing is not a profession, but an instrument for the masses to come to power, and therefore a writer should write about their struggles.

“Achebe sees the African writer’s job as being a teacher of his community, teaching them their history and traditions and therefore giving them back the self-respect which colonialism and the slave trade took away.’’

Thirty years after this interview, African writers are still struggling with different notions and questions of how to self-write, which for me means how to not always be “black woman” writer. Sometimes, I want to write as a regular girl.

Iimbali, a regular column by Friday editor Milisuthando Bongela, is a space for stories and other narrative-based social analysis

The problem with Lena Dunham, white feminism, and the apology industrial complex

Hollywood’s fatal attraction to TV: Why studios are turning to the small screen

A chance to lighten up and show your metal

Jezebel might not win for feminism with Lena Dunham’s body

Making mountains out of Moleskines