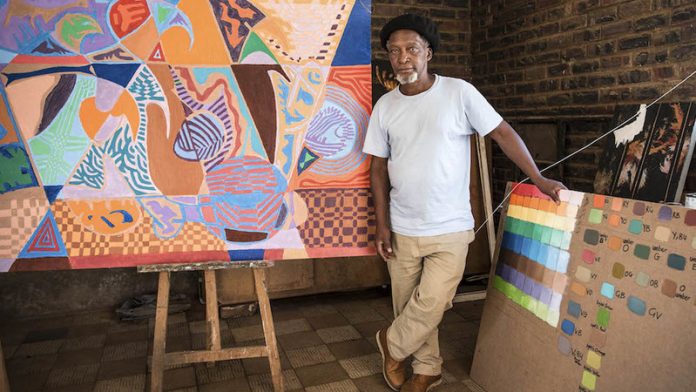 Lefifi Tladi, poet, painter and jazz musician, has an archive of anti-apartheid works because, he says, they’re not on the walls of big art academies.

There is art spilling out of his home in Mabopane. The cupboards have paintings stacked to the roof and canvases are packed right up to the door of his en-suite bathroom.

The house is an exhibition of art created in the 1970s, during the spread of Black Consciousness. It was during this time that Tladi and Bra’ Geoff Mpakhati — jazz musician, founder of the Association for the Advancement of Creative Artists and curator — decided to document the art movement unfurling in front of them.

“We thought this is the kind of material that could be used for education, especially in the arts. Instead of studying Picasso, Matisse and all these people, it’s about time we studied ourselves,” Tladi says, sitting outside his front door smoking.

In the mid-1970s, Tladi opened the first museum for black art in Ga-Rankuwa, a township north of Pretoria, where he grew up. The museum was born out of the same desire to have youngsters see themselves in an industry that was largely exclusive. The apartheid security forces shut the museum down, calling it a “communist nest”.

But Tladi’s interest was broader. He took his love for art on the road, hopping on to taxis and trains to travel around Gauteng.

He worked with photographer Morris Legwabe to snap shots of jazz musicians and the art that was taking shape in townships in answer to an oppressive regime.

Although Tladi says art schools existed in black communities under apartheid, they focused too much on the social conditions of townships, leaving students unable to see beyond these areas. In that way, Tladi argues, art created in townships was always doomed to be ?ostracised.

“That’s why we have never had a South African art; we always had township art,” Tladi says. “We couldn’t perceive ourselves beyond the township in the context of South Africa. That’s what the limitations were.”

Today, Tladi has seen hip youngsters start art workshops in Mabopane, but he believes they are disconnected from the past because ?they don’t know the work of African artists of the past well enough.

“The advantage with us was that before we became poets we were actually reciters,” Tladi says. He remembers reading the works of poets before him, and memorising them so that he could recite their work at any time. He does just that, reciting the words of Don Mattera — an impromptu spoken-word performance on the soapbox of his stoep.

“Corner of Eloff and Von Brandis/ A blind man sitting begging/ And I put a cent in his palm/ And he looked up and said,/ ‘Dankie my baas, dankie my baas’/ Call his own brother baas for a cent”.

For Tladi, young poets and artists may know some of the names of the famous artists who came before them but they don’t know enough to inform their own work and to take political art forward.

“This is problematic, because it’s caused by the fact that we don’t know our history. You ask these young musicians at these academies: Can you give me at least five South African top trumpet players? It just ends with Hugh [Masekela],” Tladi laughs.  He once envisioned a South Africa in which young artists could see themselves reflected in the art on the walls of their learning spaces.

The archive he has curated is stored on slides, which were used for projectors before the digital age. It would cost a small fortune to convert the hundreds of slides on to microfilm, and universities have told him they don’t have the budget for it. The slides are locked in two boxes, gathering dust.

Tladi says that, with the exception of one or two pieces, the walls of the academies he has visited are adorned largely with Western artworks.“Go check them out; they’re not there because the people aren’t conscious. These are European universities on the African continent. Period. Are you not shocked to have a department of African studies in Africa? Shit,” Tladi says.

He believes that until these institutions let students see themselves in the work they learn, they will always be stuck in rewind rather than moving forward to nurture the work of young artists.