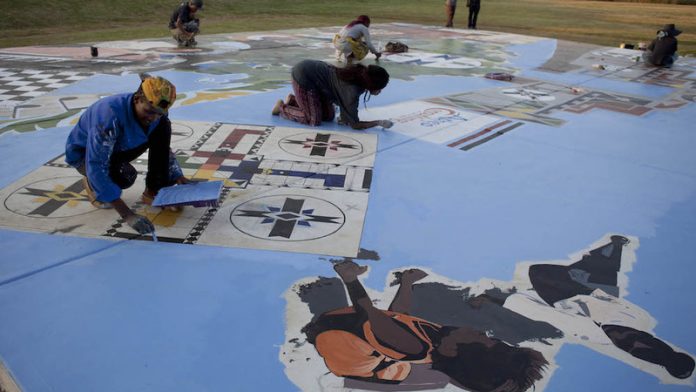 The Capital Theatre off Pretoria’s Church Square is a dilapidated Renaissance-style building, built in the 1930s, whose dome-shaped shell seems intact. The building is used as a parking lot for municipal workers but everything not structural, from its stage to its basement fittings, is in tatters.

Lerato Kuzwayo, a slight figure in cargo pants, copper bangles and a backpack, explains the importance of the building, which is part of Capital Arts Revolution’s attempts to revitalise Pretoria’s arts scene.

“Church Square is the heart of the city. It is where the city was born and recent research has actually suggested that it might have been a precolonial capital where the chief [Tshwane] used to live around the square,” he says.

“Making use of a space like this has been seen to enhance the kind of life around that space, culturally speaking, socially speaking and economically speaking.”

Kuzwayo is the co-founder of the Capital Arts Revolution, an organisation whose stated aim is “to make arts available to people from all walks of life”. It does this by hosting events in neglected buildings such as this one and in Pretoria’s townships such as Mamelodi and Atteridgeville.

“The idea is that Jo’burg is miles ahead,” says Thabiso Legodi, “but we’re finding something else here, man. It’s about people doing their own thing, independence and autonomy, and part of that is ownership.”

The premises have been highlighted in annual events such as Re:Capitoli, which were initially held at the Capital Theatre before moving, for the third instalment, to the Belgrave Hotel.

The event, which brings together panel discussions, music and multimedia arts exhibitions, is primarily about highlighting the movement’s aim to resuscitate the Capital Theatre but it also showcases Pretoria’s black alternative – a combination of hip-hop bohemians, jazz heads, proselytisers and underground art denizens.

“If you just go to any of their gigs and just observe things before proceedings begin, you would get an understanding as to where the power­base lies,” says Ndumiso Dladla, a Unisa academic and a supporter of the organisation.

What Dladla is suggesting is that it is an egalitarian operation where man-made gender binaries are shown the door.

“I’m just over this thing of woman and man because you find a lot of women in these spaces and they are not making a difference but they are there because they are black, or female,” says singer, actor and educator Nkoto Malebye from the organisation’s de facto headquarters, the old fire station, also known as Tshwane Arts Hub. “Yes, there should be more women involved in the arts, especially in the front to make sure their voices are heard, but her voice is just as important as Thabang’s voice or Lerato’s voice.”

Perhaps in a way similar to the organisation’s aspirations for the Capital Theatre, the Capital Arts Revolution’s aims for the Tshwane Arts Hub seem to involve reinvigorating the space and, by so doing, jolting the city into renovating it. Although the old fire station’s facades and metal awnings are dilapidated, inside all manner of art practitioners use the space for lodging and artistic production.

In a small unit off the courtyard, near the rear of the space, Malebye is seated on a verandah. She will later pose for portraits at a place where a film student will take issue with the fact that art he is storing for his friends might make it into the photographs, thereby devaluing the work.

Although the anger is later defused, it speaks to the looseness of the space, with only some of its occupants affiliated to the Capital Arts Revolution.

“There are spaces within Pretoria that are mainstream but it’s very hard to get into those spaces,” she says. “I wish there were more opportunities for us to be involved in spaces like that and not from a booking perspective, but more from, like, ‘This is what’s really happening within the youth’; ‘These are the stories we would like to tell’; ‘Could you afford us an opportunity to do that?’ So that it is not just for die chommie [the friends] but for the working artist.”

In this sense, the Capital Arts Revolution represents the average black Pretoria resident’s exclusion, from the time of apartheid to the present. By occupying marginal buildings, the organisation is challenging and nullifying the city’s violent geography.

By working as a multidisciplinary team, the movement circumvents the limited opportunities provided by the mainstream arts. “Because of how the industry is set up, the musicians get the limelight,” says jazz vocalist Nono Nkoane, a long-time affiliate. “But we help each other whichever way we can. For example, with Tumi Mogorosi’s Project Elo, Lerato Kuzwayo has been active in developing the look and the visual elements for the project. He is an important component in Project Elo.

“If you asked for my image, I would give you an image taken by a member of the family and that person would be credited. We develop this thing as a family. One day when my name is worth a lot then the images will be worth a lot as well.”

Although the organisation has studied the Botswana-based Medu Arts Ensemble and has been mentored by Black Consciousness stalwart Lefifi Tladi, Kuzwayo describes the organisation as more influenced by Pan Africanism and Es’kia Mphahlele’s Afrikan humanism than Steve Biko’s BC.

Kuzwayo says the organisation does not exclude white people, and another member, anonymously, explains that, because of Pretoria’s racist history (and present), white people are useful allies especially when deployed strategically.

Although the organisation leans towards humanism, also as espoused by Tladi, the echoes of erstwhile BC community organisations are present more in intent than in its manifesto, be the organisation rallying against Pretoria’s bureaucracy or livening up public parks.

In Mamelodi, in front of a mural depicting indigenous games that a Capital Arts Revolution clique is painting, Mashidikwe Sepeng interacts with onlookers. He explains that the mural will have people interacting and will see the arts as being the glue to bringing people together.

“The idea is to show people the functionality of art,” he says, paintbrush in hand.

What he doesn’t say is that, through the mural, board games such as skomboriki, ludo, draughts, chess, mlabalaba, diketo and bantumi will live as equals rather than as estranged cousins, to be enjoyed by Mamelodi’s old and young.