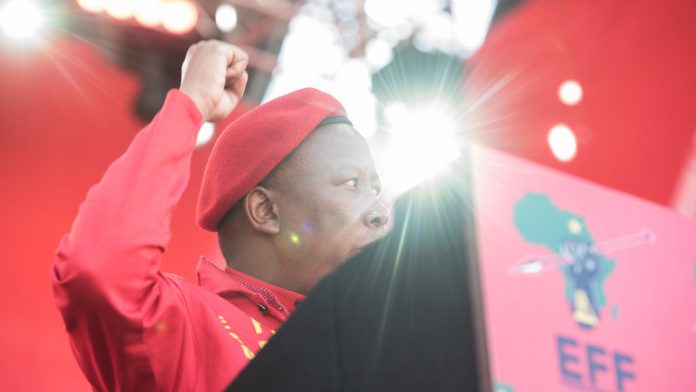 Economic Freedom Fighters leader Julius Malema has set the stage for a
possible backlash from the Independent Electoral Commission when he “warned” the body not to rig elections.

At the same time, he kept up his war talk, warning the EFF would “respond to (violence) with violence”, and that the army would force President Jacob Zuma to step down before 2019.

His almost two-hour-long speech – apparently from the cuff – reached a crescendo when he spoke about the IEC’s “rigging” and the ANC’s treason charges against him for recently telling Al Jazeera he would take power through the barrel of a gun.

Addressing an enthusiastic crowd which packed the 40 000-seater Orlando Stadium for the EFF’s manifesto launch on Saturday, Malema said his “socialist project” could not be derailed.

“The IEC must be like the judiciary. You must be independent. You stole our votes in Alexandra, we allowed you.

“We defeated the ANC in (the general elections in) 2014 in Gauteng, they stole our votes. I say to you, there are two parties which are contesting elections, but I want to tell you there is a third one, there is a third party which is contesting against us, called the IEC.

“We defeated apartheid. We will defeat you.”

“We fight in Parliament, we fight in the courts. Every time we fight  (they say) we are mad with violence, when we fight intellectually, they bring bouncers to beat us up, no-one opens a case against them.

“When we protest and say they are rigging the elections they bring the  army no one opens a case against them.

He also turned against State Security Minister David Mahlobo, who this week warned that there were NGOs and “foreign forces” threatening to destabilise the state, without naming any of them.

“I want to tell Mahlobo, go and look after your health. Minister Mahlobo, you don’t look healthy and a body which is not healthy cannot  produce a healthy mind, that’s why you are sick.

“Go and look after that stomach, we don’t know which part is sitting where, the stomach is hiding everything. You are a small boy, you are an intelligence minister who is not intelligent.

“We are not scared of you, you must tell Zuma too. Zuma will get out  of office whether he likes it or not. He will not be president by 2019 [when his two terms end and when the next general elections are held].  Who’s Mahlobo?

“I was in the ANC at the age of nine, I’ve never come across a crook or cadre called Mahlobo. I don’t know that chap.”

“You will never defeat the power of a black nation. We’re not scared. I sleep at night, I’m not scared of you.”

“The only thing I stand for is the truth. I don’t go around beating up people, neither did I threaten to beat up Zuma in Parliament. I only speak the truth to power. That’s the only thing I’m doing.

“Why open a treason case against people who speak the truth? What  treason is that? Since when is the truth a treason? The ANC is led by clowns. That’s why they confuse the truth with treason. There’s nothing treason here.

“Those soldiers are going to turn their guns against you”
Malema threatened that the army would turn against Zuma – a threat that security forces are bound to take seriously following a 2011 march on the Union Buildings which included off-duty soldiers. Defence  force union Sadnu also recently encouraged soldiers in their free time  to protest against their commander-in-chief, which is Zuma.

Malema said: “The same army they say it must be brought to the EFF  that army is going to turn their guns against them because this army  doesn’t want this government, this army doesn’t want a corrupt  government.

“The army is not happy, and then you threaten us with the army. This  army is EFF people, they see their hopes in the EFF.

“These policemen in uniform, they are EFF, every time they beat us there when we protest, (they say) “fighter we are with you, just move this side”, because they are our police, so why threaten us with our  own people.

“The IEC, stay away (from them), run peaceful, free and fair  elections. That’s all we are asking from the IEC.

“There is no violence we are threatening, we are going on the streets, let us go door to door, to the community, to taxi ranks, let us go everywhere. Let us meet them on the ground.

“All of you, you came here empty handed, let me tell you, you are  going home empty handed but you received soul food, you gained hope,  today you are leaving here a better person because the future of a black nation looks bright.

“We want to give you hope, we want you to receive hope. We want you to  say I’m going to fight on the ground because now I’ve got a fighting  machine called the EFF.

Launching the party’s manifesto, he said: “I’m here today to arm you, I’m giving to you the weapon which you must go and fight with, I’m  stating to you this is your weapon,” he said, holding up a copy of the  party’s 2016 general elections manifesto.

“This is the gun I’m talking about. Take up this gun and go and shoot them. This country is safe in your hands, this country deserve a better party in power,” he said, to overwhelming cheers from the  crowds.

“It’s the EFF and the ANC (only)”
The ANC maintained a radio silence on the EFF in the media and on  social media the whole of Saturday, while the DA said Malema should  apologise for a list of things.

This led Malema to proclaim that there were only two parties fighting  the elections, the EFF and the ANC.

“We are contesting against the ANC, not against any Mickey Mouse  political party.