‘Malema was right, we will take up arms’, say EFF supporters 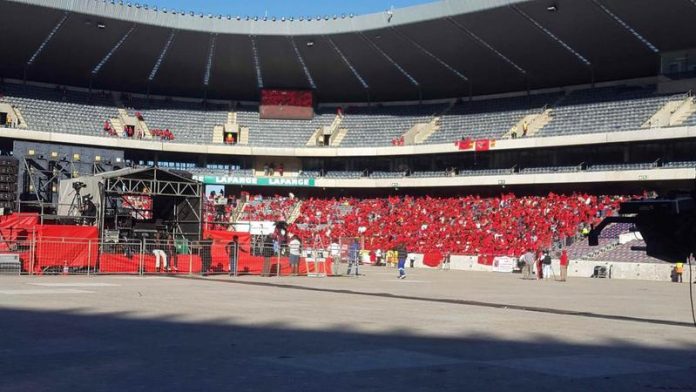 Economic Freedom Fighters leader Julius Malema was right when he said his party would take up arms and remove President Jacob Zuma’s government through “the barrel of a gun”, EFF supporters said on Saturday.

EFF supporters started arriving at the Orlando Stadium in Soweto, Johannesburg, early on Saturday morning for the launch of the EFF’s August 3 local government elections manifesto.

A few hundred people had already taken their seats inside the stadium before 9am and were singing to pass the time. Hundreds of supporters were entering the stadium and more were arriving in buses. Programmes have been placed on each seat in the stadium and there was a large police presence at the stadium.

#EFFManifesto The echoes of supporters through the stadium. Seats are filling up and anticipation is growing. EC pic.twitter.com/akIj66zEmz

Speaking at Orlando Stadium, Mmatsela Motsima, who travelled from Qwaqwa in the Free State, said she supported Malema’s controversial statement.

“As a fighter, I will tell you this – our people have suffered for a long time under apartheid and are still struggling under the ANC government. The CIC was on point… the ANC government has killed miners in Marikana [in North West], police use force on our people. So when that time comes we will fight this government,” said Motsima, draped in red EFF regalia.

While there was no need to take up arms, South Africans were reaching “boiling point” and getting impatient, said Bonolo Modise, who hails from North West.

“Young people need education and jobs, that’s all. The majority of the population is young people, but they have no means to contribute to the future of their country… what kind of future is the ANC government building? This government must not blame anyone when the EFF take matters into its own hands and do something about this bad situation,” he said.

Ali Komape, from Palm Ridge, Ekurhuleni, in Gauteng, said he wanted Malema to outline solid plans for the organisation and young people. He said the EFF “should step up as government has failed”.

“I want to hear about how communities should survive and what are the plans after the local government elections. We need the way forward from the CIC.”

Thousands of party supporters are expected to fill the 40 000-seat Orlando Stadium at the manifesto launch. Malema is expected to outline his party’s plans for local government.

Opposition parties, such as the EFF and the Democratic Alliance, have upped the ante and campaigned vigorously in the strategic metros, including Johannesburg, Tshwane, Ekurhuleni, in Gauteng and Nelson Mandela Bay in the Eastern Cape. All are vying for a piece of the pie as support for the governing ANC appears to have slightly decreased, especially in Nelson Mandela Bay. – African News Agency (ANA)

COMMENT: My sons, I weep because Judge Ruth Bader Ginsburg, who fought gender discrimination, has died and Donald Trump, under whom hardwon victories have been eroded, wants to be elected president again
Read more
Coronavirus

How many times should we be outraged before real action is taken to prevent, and not just address, the scourge of sexual abuse in schools?
Read more
Opinion