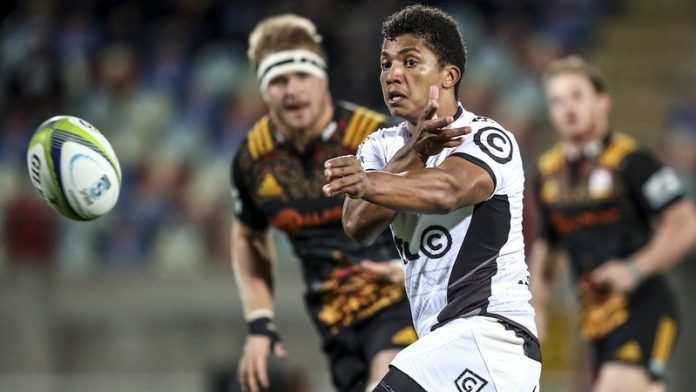 Only the desperate, the insomniac and the lonely would have seen Garth April’s twinkling try for the Sharks away to the Chiefs last weekend. By the time the rugby nation had woken up, there were other things to discuss, notably how Johan Ackermann, Warren Whiteley and Elton Jantjies could be so comprehensively out-thought at Ellis Park by a Hurricanes brains trust that included ex-Sharks boffin John Plumtree.

With the Stormers also losing, on this occasion unluckily to the Waratahs, it was a miserable, portent-filled weekend for South African rugby, with worrying signs that the mercurial Jantjies is not necessarily a shoo-in for the vacant Bok flyhalf berth.

Of all the local franchises, only the Bulls, winning on the road, offered up reasons for hope. And then there was April, touching down on the cusp of May with feet like Fred Astaire and a step so neat it would have passed muster on Strictly Come Dancing.

April’s voyage began at Florida High School on Johannesburg’s West Rand before he moved to the rugby-mad heartland of the Boland, but for the purposes of this story his first halting step forward took place in a Western Province President’s Cup final, where Durbanville-Bellville (known as Durbell) were playing Belhar in October 2014.

“Garth didn’t have a good start for us because he came [from the Boland] with a hamstring injury,” said Durbell’s coach at the time, Jan Loubser. “I gave him a bash off the bench at Newlands that day and slowly he was brought along.”

Later in the 2014 season Durbell, a “working-class” team according to Loubser, found themselves chasing the remaining few qualifying spots in the following year’s Community Cup.

Just after their win at Newlands against Belhar, they played Boland’s Wesbank in one of the Cup’s repechage rounds but were beaten. The defeat added two weeks to an already long season and a potentially embarrassing trip to Upington, where Durbell and Upington Dorp played in a do-or-die clash to determine the competition’s last qualifier.

“It was so hot that afternoon – something like 42°C – that they postponed the start by an hour,” remembers Loubser, adding that it ended up being an easy win. If anything, the heat seemed to affect the home side worse, with visitors Durbell galloping to a comfortable 86-26 win in the last official game of rugby played anywhere in South Africa that year.

Durbell’s victory in Upington earned them the lowest possible ranking of 20th in the opening rounds of the 2015 Community Cup. The ranking seemed plausible enough when in their first game they travelled away to East London and were beaten 22-14 by Old Selbornians.

Their starting flyhalf was injured against Selbornians, however, and this gave Loubser the opportunity to move April from fullback to 10 – something he’d been flirting with anyway.

Although the move wasn’t without its adjustment problems – April loved the freedom of playing at fullback — it proved to be inspired. Durbell beat cup-holders Rustenburg Impala in their next match, and completed their dizzy run by beating Springs and Port Elizabeth Police.

They finished top and so qualified for the competition quarterfinals, something that had hardly seemed possible when they schlepped to Upington the previous November.

Loubser is one of those heart-warmingly uncomplicated coaches who loves the game as others love cars or taking selfies. An investigating officer at the South African Revenue Service, he’s been at it for 26 years, running the entire amateur and semi-professional gamut from coaching schoolboys to colleges and clubs dotted around Cape Town’s northern suburbs.

After a not entirely happy partnership with Stanley Raubenheimer and the then director of coaching, Nick Mallett, as part of the Western Province Vodacom Cup staff, he retired from the comparatively bright lights and sought out the semi-obscurity of coaching schoolboy rugby.

Before long, he’d responded to an advert in the local newspaper and found himself back in the saddle at Durbanville-Bellville, spending what he calls “five glorious years” at the club.

His coaching philosophy isn’t excessively structured and he puts a premium on his players being happy and content. “If you get the other things right — the brothership and the support system — the rugby takes care of itself,” he says.

“They can all play rugby. What you have to be careful of is when their dog has died after 10 years or they’ve lost their job — they’re going to bring that on to the field with them.”

With Durbell having made the Community Cup’s last eight, the tournament’s concluding chapter took place in Rustenburg over the 2015 Easter weekend. Durbell, with Loubser keeping faith with April at flyhalf, beat title contenders College Rovers first up.

Next came an excruciatingly close semifinal win against Despatch, needing an April penalty to seal Durbell’s place in the final.

And so they marched on to the last match of the competition, where Durbell, ranked 20th, locked horns with Rustenburg Impala. It couldn’t have been closer and, as luck would have it, victory hinged on another April kick.

In the 77th minute of the final, April stepped forward and calmly gave Durbell a one-point lead. They protected it and won 31-30. Loubser celebrated by blowing his wife Lourensa a kiss on national television.

Although April, with the caring and ever-present attentions of his bother Brandon, has since danced on to a bigger stage, Loubser called time on a yeoman career after the final.

Perhaps a little too selflessly, he puts the Community Cup win down to that November victory on a sweltering afternoon in Upington.

It was a trip no one wanted on a ground on the edge of the rugby-playing world, but in retrospect it signalled a precious coming together. It certainly launched April’s career, with Western Province somehow letting him slip through their fingers. Now the tricky flyhalf awaits Pat Lambie’s return, while Loubser, his former coach, watches it all on television.

He does so with a keen eye – and a growing realisation that he’d rather be somewhere else.