How the manifestos stack up 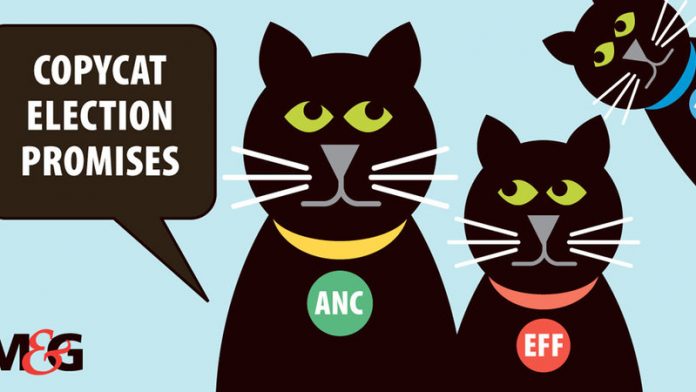 The three biggest political parties are approaching the local government elections scheduled for August from wildly different perspectives. The Economic Freedom Fighters is promising local revolutions, the Democratic Alliance swears it will make the trains run on time and the ANC is preaching people power.

But all three want to give you free wi-fi.

The parties are already campaigning door to door and stressing their differences. But their election manifestos, the last of which the EFF published on the weekend, show that they agree on more than just vague generalities such as the need to create jobs and fight corruption.

The ANC, the DA and the EFF have all promised they will:

l Ban councillors and officials from doing business with their municipalities;

l Create, or at least support, street- and ward-level committees to get involved in safety.

Manifesto title: “Together advancing people’s power in every community”

Unique selling proposition: An entire section on climate change and how the ANC will help municipalities adapt to it.

Potentially most controversial promise: To build, presumably with state funds, “shared sites and venues for worship”.

Most convoluted commitment: “Building capacity to undertake long-term planning with a view to ensuring co-ordination and integration of strategies for growth and development.”

Sneakiest bit of politicking: Presenting information in such a way as to make it seem the expanded public works programme has already delivered at a “119% success” rate on a target of six million “work opportunities” – before the end of 2019.

Potentially most controversial promise: None. Any hint or controversy is so smoothed over as to be imperceptible.

Most convoluted commitment: “Developing long-term strategies to manage urban densification and contain urban sprawl that maximises the dignity of those people who live in these areas by planning ahead for improved service delivery to growing populations.”

Sneakiest bit of politicking: Taking credit for keeping the lights on in Cape Town when Eskom implements load-shedding thanks to the Steenbras pumped-storage hydroelectric scheme – which was built in 1979.

Manifesto title: “Our last hope for jobs and service delivery”

Potentially most controversial promise: To “practically and physically resist” anyone who “imposes their narrow wishes on the majority” — with wide leeway to interpret when that happens.

Most convoluted commitment: “Majority of municipalities in South Africa are incapable of generating own income largely due to the high levels of unemployment, poverty and lack of economic activities in their localities. This is one area that needs to be reconceptualised with the aim of driving a developmental agenda and programme which will bridge the gap between rural and urban municipalities.”

Sneakiest bit of politicking: Making promises with zero prospect of success, but not attaching timelines. The party promises that 50% of all milk, bread and meat consumed in a municipality will be produced in that municipality – but not by any deadline.

* The chicken-in-every-pot rating measures the number of specific promises per manifesto page, limited to the at least possibly measurable and excluding vague generalisations and promises to, for instance, come up with a strategy or comply with the law

# The EFF tends to make compound promises, such as that each of its municipalities will set up a driving school and that this school will ensure that every matriculant gets a driver’s licence, and that such licences will be “on time”. Where the party treats these compound promises as a single, inseparable commitment, they are counted once. Splitting them into their constituent parts would greatly increase the party’s promise density

'Adapting, being open, having grit and being flexible; this is the way of the future,’ says Vishal Tilak, a judge at the recent SA Innovation League Awards'
Business

It is of great concern that the census still does not include questions relating to sexual orientation and excludes transgender, intersex and non-binary persons
Environment