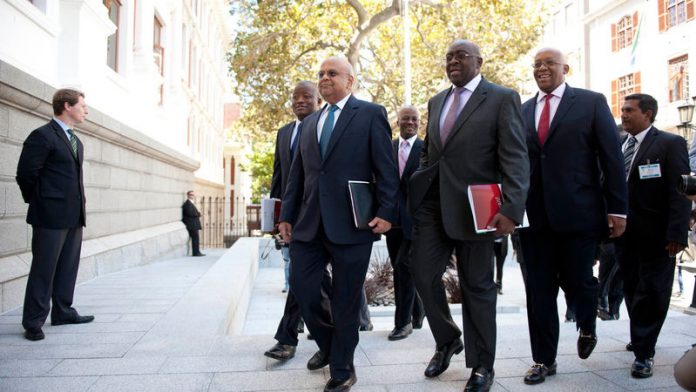 South African Finance Minister Pravin Gordhan’s efforts to restore investor confidence in Africa’s most-industrialised economy and ward off a junk credit rating are being frustrated by the very man who appointed him to his post.

President Jacob Zuma has spent the past five months lurching from one scandal to the next and has repeatedly undermined Gordhan’s authority. According to the Sunday Times newspaper, Gordhan is now at risk of being charged with espionage, and fired – speculation that drove the rand to a two-month low despite a denial by the presidency.

“I don’t think it would be easy for any finance minister in any country in the world to operate in this kind of environment,”  Abdul Waheed Patel, managing director of Cape Town-based Ethicore Political Consulting, said by phone. “To survive you need a single-mindedness about what is best for the country and what is best for the economy. I think he’s got that.”

Zuma’s actions have repeatedly damaged the economy. In December, he named little-known lawmaker David van Rooyen as finance minister, sending the rand and the nation’s bonds into a nosedive before reappointing Gordhan to a post he held from 2009 to 2014. He backtracked only after coming under pressure from business leaders and senior ruling party officials. The central bank has cut its forecast for economic expansion this year to 0.8%, predicting the slowest growth since a recession in 2009.

Deputy Finance Minister Mcebisi Jonas later alleged that he was offered the position by the Gupta family, who are friends of Zuma’s in exchange for business concessions. The Guptas, who own businesses in South Africa, have denied any wrongdoing, and Zuma has said only he has the power to appoint ministers.

On March 31,  South Africa’s top court found Zuma violated the Constitution when he defied a directive by the nation’s graft ombudsman to repay state funds spent on his private home. A month later, a high court ruled that prosecutors erred when they dropped a corruption case against Zuma seven year ago, opening the way for 783 charges against him to be reinstated.

Police Probe
Zuma has also ignored Gordhan’s demand to fire tax chief Tom Moyane for defying his order to halt an overhaul of the South African Revenue Service. He’s refused to intervene in a police probe into allegations that Gordhan established a rogue investigative unit when he headed the national tax agency.

Gordhan was aware of plans to arrest him and said he wouldn’t be intimidated, Beeld newspaper reported on Monday, citing five unidentified people in the National Treasury and the central bank.

“Even if the rumors of Gordhan’s imminent arrest are untrue, the damage has been done,” said Nicholas Spiro, a partner at London-based Lauressa Advisory Ltd, which advises asset managers. “It reinforces the perception that Gordhan lacks political support to undertake much-needed reforms – a problem that’s all too apparent in several other major emerging markets, including Turkey and Brazil.”

Stable Democracy
“Countries will go through political issues and challenges from time to time,” Ramaphosa told reporters. “South Africa is a stable democracy. Our institutions are strong, they are robust and they are durable.”

Gordhan said he had no trouble selling South Africa to investors and foreigners.

“Everybody recognizes that we are the most developed economy on the continent, we have the most sophisticated business infrastructure,” he said in an interview. “Nobody has raised the political questions. There’s a huge amount of respect for South Africa and what we do.”

Gordhan’s stewardship of the economy received a stamp of approval from Moody’s Investors Service on May 6, when it affirmed South Africa’s credit rating at two levels above junk after putting the assessment on review for a downgrade. S&P Global Ratings and Fitch Ratings Ltd, which both have South Africa one level above junk, will assess the country over the next two weeks. Zuma and Gordhan have pledged to work with business leaders and unions to avoid a downgrade.

‘Financial Pandemonium’
The sell-off in South African assets that followed Van Rooyen’s appointment as finance minister made Zuma realize that he had to give the appropriate people the authority to do the job, according to Hendrik du Toit, the chief executive officer of Investec Asset Management, which oversees about $109-billion.

“South Africa could still be open to financial pandemonium if there was a gross policy misstep,” he said in an interview in Kigali.

Investors are reassured by Gordhan’s presence, despite concerns about the stability of the government and its policies, said Dominic Barton, global managing director of McKinsey & Co.

“There’s a huge amount of respect for Pravin,” Barton said in an interview in Kigali. “South Africa isn’t on a good path, there’s no question about that.”