Libya reels under reign of terror 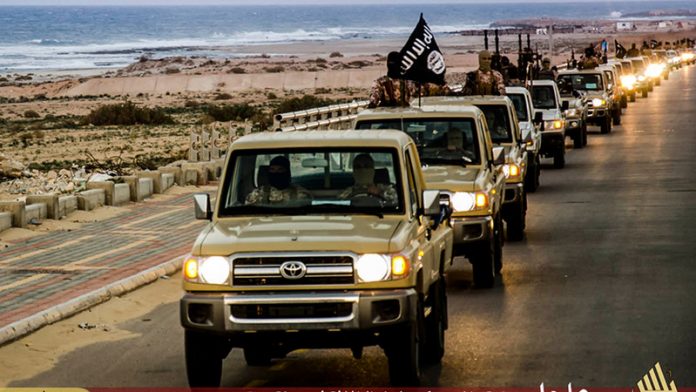 The extremist armed group, Islamic State, has unlawfully executed at least 49 people in its Libyan stronghold of Sirte since February 2015, according to a Human Rights Watch report released this week. Those killed, by means such as decapitating and shooting, include captive fighters, political opponents and people accused of “spying”, “sorcery” and “insulting God”.

The 41-page report also finds that the group is inflicting severe hardship on the local population by diverting food, medicine, fuel and cash, along with homes it seized from residents who fled, to fighters and functionaries it has amassed in the Mediterranean port city.

“As if beheading and shooting perceived enemies isn’t enough, [Islamic State] is causing terrible suffering in Sirte even for Muslims who follow its rules,” said Letta Tayler, senior terror and counterterror researcher at Human Rights Watch. “While the world’s attention is focused on atrocities in Syria and Iraq, [Islamic State] is also getting away with murder in Libya.”

The 49 executions followed largely secret proceedings that negate the most basic fair-trial standards, the watchdog said. Islamic State also has kidnapped and disappeared dozens of Libyan militia fighters, many of whom are presumed dead, exiled Sirte city councillors and opposition fighters told the human rights body.

The murder of civilians, or wounded or captive fighters, by members of a party to an armed conflict is a war crime, as is executing people without a fair trial by a regular court, Human Rights Watch said. The nature and scale of Islamic State’s unlawful executions and other acts in Libya also may amount to crimes against humanity, it added.

Human Rights Watch interviewed 45 former and current Sirte residents in March. They included relatives of people who Islamic State had either killed or detained, as well as exiled local officials and members of rival armed groups. The body also interviewed Misrata government and security officials and foreign-based Libya security analysts, and crossed-checked information against sources such as media reports and videos of Islamic State acts in Sirte.

The Sirte residents described scenes of horror — public beheadings, corpses in orange jumpsuits hanging from scaffolding in what they referred to as “crucifixions”, and masked fighters snatching men from their beds at night. They said “morality police”, aided by informants, patrolled the streets, threatening, fining or flogging men for smoking, listening to music or failing to ensure their wives and sisters were covered in loose black abayas. They hauled boys and men into mosques for prayer and religion classes.

A 30-year-old woman, who had come to Misrata for healthcare, cried as she said she and her family would have to return to Sirte: “Life in Sirte is unbearable. Everyone is living in fear. They are killing innocent people. There are no groceries, the hospital has no doctors or nurses, there is no medicine … There are spies on every street. Most people have left, but we are trapped. We don’t have enough money to leave.”

Islamic State is also looting and destroying homes of perceived enemies, more than a dozen residents said. The group has closed shops specialising in lingerie and Western clothing, they said.

Islamic State began taking over Sirte in February 2015. By August, it controlled the city, including the port, air base, main power station and radio station, along with all local government offices and finances, creating its biggest stronghold outside of Iraq and Syria.

Islamic State has set up at least three prisons in Sirte, including one in a former preschool. The group has allowed communications with the outside world only through call centres it controls and has shut all banks but one, which is open only to its members, former residents said.

Classes have been suspended at Sirte University since late last year, when teachers and students stopped attending after Islamic State banned history and law instruction, and ordered separate shifts for male and female students. The group has patrolled primary and secondary schools and quizzed the students on Islamic law, former residents said.

Fighting since 2014 between militant factions supporting two rival governments, one to the east and one to the west, has left governing institutions in a state of near-collapse. A third, the United Nations-brokered “unity” government, has yet to gain authority. The United States, United Kingdom, Italy and France are reported to be preparing a military campaign against Islamic State in Libya. In May 2016, rival Libyan armed forces began separate mobilisations for an advance on Sirte.

All parties to the Libyan conflict must take all feasible measures to protect civilians from harm, in accordance with the laws of war, Human Rights Watch said. Libyan authorities and countries able to exercise criminal jurisdiction should take immediate steps to apprehend and prosecute those responsible for atrocities, it added, saying that member countries should increase funding to the International Criminal Court so it can pursue further investigations into ongoing serious crimes by all sides in Libya.

The rights watchdog called on the UN Human Rights Council to appoint an independent expert or create another mechanism to document serious, ongoing abuses by all parties in Libya, as well as the command structure of Islamic State, with the aim of deterrence and accountability.

The UN Security Council should impose sanctions on members of Islamic State and others found responsible for serious crimes in Libya – including those who intentionally finance or otherwise assist abuses – while ensuring appropriate due process, said Human Rights Watch.

“Instead of issuing empty threats, international players should keep their promises to identify and punish those responsible for serious crimes in Libya,” Tayler said. “Failure to act will only lead to more civilians falling victim to horrific crimes by groups including [Islamic State].”