Zuma is reined in by top brass 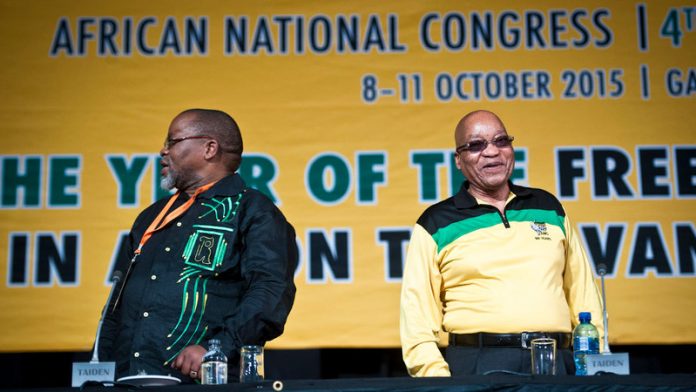 President Jacob Zuma has launched what appears to be a spirited fight-back amid growing calls for him to step down. But it has also emerged that senior ANC leaders, including Deputy President Cyril Ramaphosa and ANC secretary general Gwede Mantashe, are making it difficult for Zuma to hire and fire key government officials and Cabinet ministers.

Although ANC sources told the Mail & Guardian that Zuma had agreed to step down before his term came to an end in 2019, he appeared to launch a counter-offensive ahead of next week’s national executive committee meeting to decide his political future, accusing some in the party of turning against him. Those who have been on the receiving end include Finance Minister Pravin Gordhan and Ramaphosa.

According to ANC and government insiders, Ramaphosa has put his foot down, insisting that all key appointments in state entities should be done through the ANC deployment committee, which he chairs. Previously, the committee had proved to be ineffective as Zuma’s administration had often bypassed it in making appointments.

The M&G has also learned that Zuma has been unable to reshuffle his Cabinet because some in the ANC have objected to the kind of changes that he wanted to make.

Government sources told the M&G part of the reason for the delay in announcing the appointment of Transnet chief executive Siyabonga Gama was that Ramaphosa told his Cabinet colleagues to follow the “right channels” and first consult the ANC’s deployment committee.

This procedure has also been followed in the appointment of a number of other senior officials in state-owned enterprises and government departments.

Ramaphosa and Mantashe are also understood to be opposed to the planned removal of Deputy Finance Minister Mcebisi Jonas, who was apparently meant to be replaced by Zuma ally Sfiso Buthelezi. Two months ago, Buthelezi was sworn in as a member of Parliament. In April, he was elevated to the standing committee of finance — a move many see as preparation for him to replace Jonas.

There has been speculation that Zuma was planning to remove a number of ministers, including Higher Education Minister Blade Nzimande, Trade and Industry Minister Rob Davies, Agriculture Minister Senzeni Zokwana and Jonas.

But, sources say, he is being held back by senior people in the party.

“He [Zuma] created an environment where if people say no to a decision, he agrees with them. It is supposed to be his prerogative to appoint and fire ministers, but the problem with him is that he always wants to consult first before he make appointments,” an ANC insider said.

“People are taking advantage of that. There have been suggestions of a reshuffle many times, but it is not happening because people [senior party leaders] are disagreeing with him.”

Ramaphosa and Mantashe were among the ANC leaders who objected to Nhlanhla Nene being removed as finance minister and Des van Rooyen being appointed to the position. The two have also made it difficult for Zuma to fire and appoint ministers and senior government officials as he wished.

Asked if the ANC believes Mantashe and Ramaphosa are blocking Zuma from making decisions or appointments, ANC spokesperson Zizi Kodwa denied this.  “With all the difficulties we continue to face within the organisation, this leadership led by Zuma and  the top six have done very well to navigate through these difficult times,” Kodwa said.

Part 3 of the story continues here.