Is codeine Africa’s drug of choice? 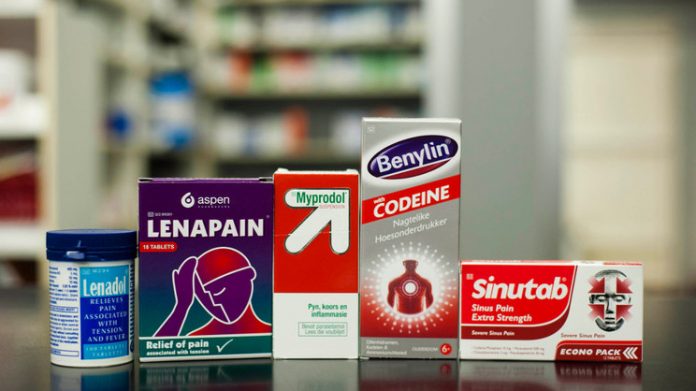 Experts are becoming increasingly concerned that people requesting medication by a specific brand name or asking for a repeat prescription earlier than needed could be addicted to codeine.

Many don’t know that colourfully packaged and common over-the-counter flu and pain medications can be addictive. Sinumax Co, Benylin C, Sinutab C, Broncleer and Myprodol are just some examples of popular products in South African pharmacies that are not as harmless as they seem: they all contain the addictive pain-reliever codeine.

The drug is a synthetic derivative of the opium poppy, also used to make heroin, and is used to treat pain and relieve cough spasms. According to the United States-based medical organisation, Mayo Clinic, codeine is very effective for pain but users can become dependent on the drug, as with its close cousin morphine, when small doses no longer have an effect. When people become tolerant to codeine, they need higher amounts of it to relieve pain which can lead to addiction.

Monitoring codeine use
Codeine addiction is an increasingly well-known problem in South Africa where the Medicines Control Council is considering regulating the drug more strictly. The problem created enough attention that South Africa was chosen to be part of the Codemisused research project together with Ireland and the United Kingdom. Funded by the European Union, the project produced research about the extent of codeine misuse in these countries and the regulations which either help or impede solutions.

Yet, on the rest of the continent the extent of codeine use is largely unknown.  After cannabis, opioids (including codeine) are the second highest substance reported from addiction treatment facilities in Africa, according to the 2015 United Nations World Drug Report. The UN’s 2014 report mentions Nigeria’s growing problem with the substance because it is easy to get over the counter particularly in cough syrups. In 2013 more Nigerians used prescription opioids (3.6%), which include codeine, than heroin (2.2%).

Banning of codeine
More recently, Ethiopia’s Food Medicine and Health Care Administration and Control Authority temporarily banned the sale of codeine containing products in November last year. This came after a US Federal Drug Authority (FDA) report in June that same year stated that the genetic make-up of Ethiopians predispose them to the negative effects of codeine. Ethiopians are more likely to convert codeine to morphine at a faster rate than others which could make the painkiller’s effects more intense – placing users at risk of addiction, breathing problems, depression and even death.

Even with increased awareness and scientific research around the problem in South Africa, there are no reliable statistics of its extent, the Medical Research Council says. But it estimates that up to one in five cases of drug use involve prescription or over-the-counter medication.

The Codemisused project says that one of the reasons so little is known about codeine misuse is because it’s “not confined to a specific group of users”. Also, because it is a medication, “codeine dependent people generally function at an acceptable social level so they rarely identify themselves as addicts”.