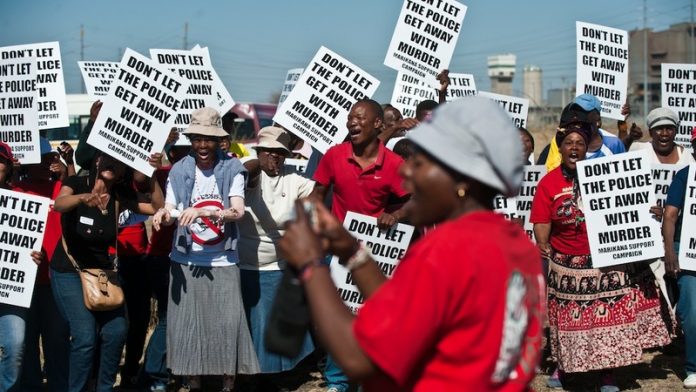 In September last year President Jacob Zuma announced that instead of going to court, government was considering initiating an alternative dispute resolution to speed up the compensation process. But the process has been slow, at best.

Andries Nkome, one of the lawyers representing the wounded and arrested miners, says that state attorney Ben Minnaar approached them last month, but failed to include advocate Dumisa Ntsebeza, acting for the widows and families of the deceased miners, in what Nkome called an attempt to “divide and conquer”.

“The state attorney came to see us last month as the lawyers for the injured and arrested. We told them that this was contrary to our agreement that they must deal with all the claims at the same time.

“Unfortunately the state only called us, and in our view they are trying to divide and conquer,” he said.

In 2012 police shot and killed 34 miners in Marikana, leaving hundreds of dependents without breadwinners.

In February this year the Mail & Guardian reported that government had handed over a proposal at a meeting attended by all the parties, including senior advocates Jeremy Gauntlett for the presidency, as well as Ntsebeza and Mpofu.

The proposal, which had been a closely guarded secret, had set out four possible responses to the civil claims filed in the Pretoria high court last year. This included how the state could accept liability in respect of legitimate claims, raising questions as to what would be seen as legitimate.

There was also disagreement over the logistics of the adjudication process, with the state proposing that the justice minister appoint an adjudicator from the ranks of retired judges to carry out the process to determine liability and fair compensation.

The representatives of the affected parties were not happy with this and set out their own proposal, which stipulated that the state must accept 100% liability for the injuries and death of the miners.

“We as the representatives proposed that the state accept liability for our clients’ injuries and unlawful arrests. The only thing remaining is to quantify how much each person must claim for. But it has been a merry-go-round of discussions and we haven’t received anything out of it. We don’t have a date of when we will meet again and this is very uncomfortable for our clients, because we can’t advise them as there is nothing on the table as yet,” said Nkome.

Meanwhile, Keamogetswe Thobakgale from the Socio-Economic Rights Institute of South Africa – which represents the widows of the deceased miners – said that the last meeting they had with government was in February. “The engagement with the state is still ongoing. They have not yet made an offer.”

The presidency and the state attorney did not respond to requests for comment.