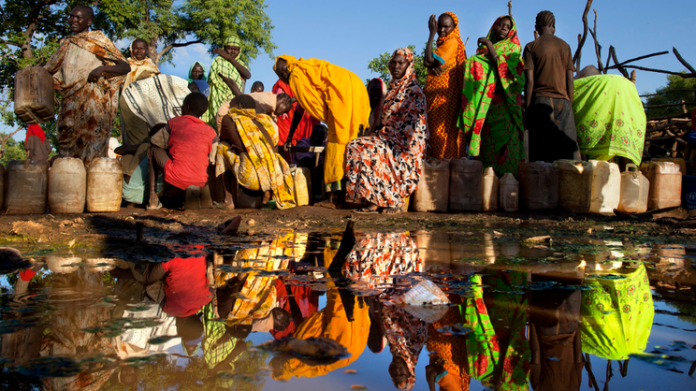 Sebit Daniel (26) is in a hurry. There is fierce competition to supply the tanker trucks lined up on the banks of the Nile in Juba, the capital of South Sudan.

He squelches through the mud and lowers a pipe into the river, signals to his two assistants and the pump splutters into life. Water courses to the open hatch on top of the tank.

Daniel is in the water business. In Juba, where clean water is a scarce and treasured resource, the private water business is cut-throat. Decades of conflict and neglect have rendered the public water system inadequate.

Only 2% of households have water piped to their homes, according to the 2010 South Sudan Household Survey, released in 2013 by South Sudan’s ministry of health. The aid organisation, Oxfam, says a person needs at least 20 litres of water a day.

Water brings financial support
But out of this desperation, people like Daniel have set up relatively well-paying businesses for themselves as small water suppliers.

Daniel used to work in one of Juba’s many bakeries. When he got married about 10 years ago, the SSP500 (then about $230) he earned a month was not enough to support his family. He heard from friends about a better way to make money: selling water to water tankers. Using his SSP4500 ($1 300) in savings, he bought a generator and pipes.

“This money helps me a lot. I use it to take care of my family by buying food, paying medical bills and buying all other necessities,” he explains.

Daniel earns around SSP700 a day ($30 dollars) after paying two employees who help him with the work. He pays each worker SSP100 ($4 dollars) a day. This income is almost four times what he earned as a baker.

Water trucks
Research from Oxfam shows that there are about 300 registered trucks supplying water in Juba. In addition to the water tankers, an army of bicycle hawkers – with plastic containers full of water strapped to both sides of their bicycles – sell water in the street. In some areas donkey carts carry water. Factories also provide bottled water to vendors.

According to Yar Paul Kuol, the managing director of South Sudan Urban Water Corporation, they employ at least 500 people. “People even carry water physically and make it a business for a living,” she says.

The South Sudanese government is urging even more people to get into the water business. With the theme of “Better Water, Better Jobs” adopted at this year’s World Water Day in March, it not only hopes that more people will be lifted out of poverty but that the growing legion of water providers will give many more people access to clean water.

But with the economy in crisis, Daniel and other water providers are feeling the pinch. The price of fuel has skyrocketed and it has become more expensive to pump water from the Nile. Many trucks save fuel by only delivering closer to the filling stations. Some bottling factories have had to close shop and the cost of water is therefore increasing.

Read our story on the water crisis in South Sudan here.

Government intervention needed
The water vendors say they need a fuel subsidy from the government – without that, they will go under and Juba’s residents will not have water.

Numerous Juba residents have to choose between putting food on the table and buying safe water.

The government’s household survey shows that one in three people have no choice but to consume contaminated water.

Daniel says he knows that people depend on him to get clean water. “If they can’t afford to buy from us, even more of them will drink unsafe water.”

Many vendors fear that as the economic crisis deepens, rival vendors will start selling untreated water illegally – and that will put more lives at risk.

“What choice will we have?” one vendor asks. “We have to survive.”