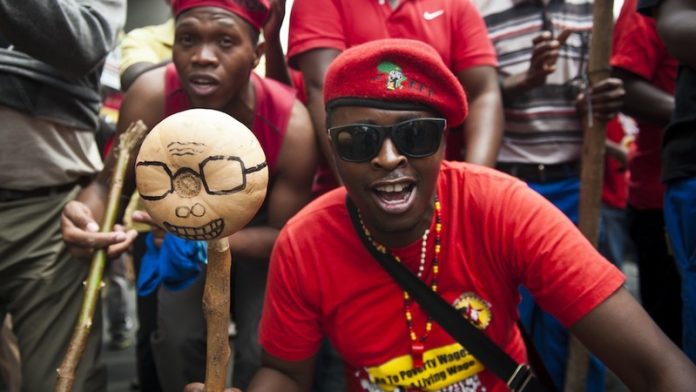 Nearly two years after its expulsion from union federation Cosatu an unlikely alliance between the National Union of Metalworkers of South Africa (Numsa) and trade union Solidarity is gaining momentum in workplaces around the country – despite massive political differences and Solidarity’s decision not to join a new federation being convened by Zwelinzima Vavi.

Solidarity, best known for representing white workers, held its council meeting this week and resolved not to join the federation, which already received backing from 25 smaller unions that splintered from Cosatu affiliates.

“The one major difference is that we are a union in favour of the market economy whereas Numsa has a very strong support for any form of socialism. Ideologically, that was a big stumbling block,” Solidarity general secretary Gideon Du Plessis told the Mail & Guardian.

“There were basically three words in the founding principles that made our members reject the proposal to join. Those are the words ‘militant’, ‘socialism’ and ‘anti-imperialism’. That’s not part of our vocabulary as a union.”

Numsa said Solidarity’s decision not to join the federation was not surprising. It was well aware of the stark political differences between itself and Solidarity and that compromises from either side were unlikely to happen.

“Cosatu accused Numsa of abandoning its own political perspectives by working with what they consider an apartheid trade union,” said Karl Cloete, Numsa’s deputy general secretary. “We say, we will not relinquish our political orientation but we accept that Numsa is a trade union, not a political party.”

Despite these stark differences, Du Plessis confirmed several meetings between Solidarity officials and Numsa representatives had taken place, such as his address to the metalworkers’ national bargaining conference and an invitation to attend the union’s political school, which he intends to honour.

“In Solidarity’s last session, our members also indicated they would not object to joint training sessions on retrenchments and job losses with Numsa shop stewards,” he said.

Both unions have confirmed that a working relationship, which began with an energy crisis summit held in Johannesburg last year, has evolved into the pair partnering up during negotiations in sectors that include the engineering bargaining chamber and the automotive, tyre and energy industries.

Numsa is South Africa’s biggest union with close to 380 000 members and Solidarity’s membership is currently hovering at around 140 000 workers.

Numsa was kicked out of Cosatu in November 2014 for extending its recruitment scope and contravening the federation’s founding principals of one union, one industry. Since then, the metalworkers have started organising employees at mining companies, airlines, the country’s ports of entry and the state’s main electricity supplier, Eskom. In the metal engineering industry, Solidarity is the second biggest union. The potential of this partnership is something that Du Plessis said cannot be ignored for the sake of politics.

Traditionally, Solidarity has organised the upper echelons of the employee base, or white-collar workers, while Numsa organises the entry level and semi-skilled employees, or blue-collar workers. Du Plessis admitted that the split focus has aided the unions’ ability to join forces.

“As an ally, it is important for Numsa to have us as a partner because we represent skilled workers, which is a gap in their constituency. We also see Numsa as a mainstream trade union and  for us it is important to break up conceptions that we’re conservative and only deal with our own. With Numsa we can easily break down that conception,” Du Plessis said.

Numsa said this split in focus during recruitment is convenient, but also disadvantages entry-level workers.

“It is a relationship that would sometimes attract co-operation and in other instances it would be quite contradictory. Those that Solidarity would organise as white- collar workers, would sometimes be responsible for discipline over our blue-collar members. There is interesting chemistry that requires flexibility when we work together,” Cloete said.

Co-operation between the two unions has increased over the past year but leaders on either side appear cautiously aware of how they are being perceived.

“Much of the relationship with Numsa is because of the respect for the leadership,” Du Plessis said. “There’s also a personal relationship, whereas the other unions in Cosatu keep us at arm’s length. As much as we want to engage, we hear that its not politically correct. We experience that with the National Union of Mineworkers.”

Cloete also said Solidarity’s decision not to formally join the federation, is understandable.

“I completely understand that Solidarity may want to have a loose arrangement, where they don’t necessarily affiliate but take part in campaigns. They probably have more work to do to convince their membership and constituency than we have,” he said.

South Africa’s steel producer’s earnings dropped in the first quarter of 2020 because of low demand and a lacklustre economy, exacerbated by the Covid-19 lockdown
Read more
Africa

The Sisterhood reminds us that Black women are always our own antidote, our own cure. It was a refuge and refusal conceived by women who cared even when they didn’t have to
Read more
Advertising