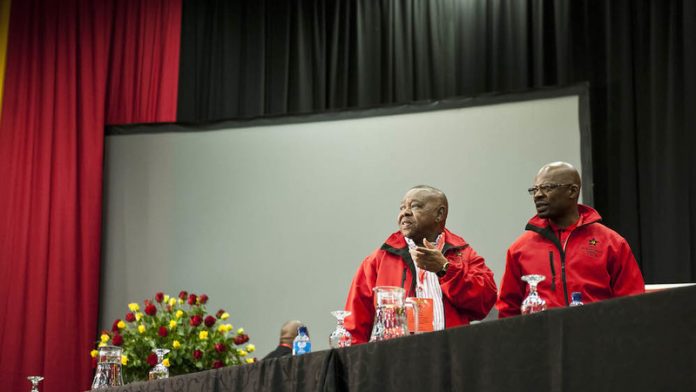 They have failed to publicly condemn the actions of the so-called premier league faction in the ANC, Mapaila said, despite the looting of state resources and killing of “our people”.

The ANC has roundly rejected the allegations.

In an address to the National Union of Mineworkers’ central committee on Thursday, the SACP’s general secretary, Blade Nzimande, called on union members to defend the ANC against people who used money to buy positions as ward councillors and mayors.

The ANC, Nzimande said, “must be defended from factionalism and this money politics. If we don’t do that, our revolution is gone. At the moment, there is a campaign to drive a wedge in the alliance.”

In recent months, the SACP has been steadily growing disenchanted with its alliance partner. Initially reports about the growing cracks in the alliance were dismissed as untrue and, later, as unfounded rumours. But senior communist party leaders are now publicly attacking the ANC and cutting to the heart of issues in the ruling party.

“What is increasingly happening is that the movement [the ANC] is led by a faction,” said Mapaila.

The premier league is made up of Mpumalanga’s David Mabuza, the Free State’s Ace Magashule and the North West’s Supra Mahumapelo.

The ANC chairperson in KwaZulu-Natal, Sihle Zikalala, has also been linked to the group, which is believed to support Nkosazana Dlaminini-Zuma, the outgoing African Union Commission chairperson, to succeed Zuma.

The SACP, on the other hand, supported by the trade union federation Cosatu, apparently would prefer Deputy President Cyril Ramaphosa as the next leader of the ANC.

Mapaila said the premier league was getting its way in the ANC. “There is evidence out there that it exists. They killed some of our members and nothing is being done.”

Last week, the Mail & Guardian reported that there have been at least seven political killings this year, with at least five recorded in 2015. In January this year, two people were killed at an SACP meeting in Inchanga outside Durban.

There is no evidence linking the murders to the ANC or any faction in it, and the party immediately dismissed any suggestion that its leaders were either responsible for deaths or for failing to prevent them.

Mapaila said the SACP, once considered the intellectual engine of the ruling alliance, has been trying to raise concerns about issues in the ANC but its reports have been ignored. Among the issues it raised, he said, is evidence that ANC Women’s League elections were “won by money”.

He also cited the ANC’s decision this week to abandon the investigation on state capture, which directly implicates Zuma and the Gupta family, as an example.

The SACP is not happy with the decision of the ANC’s national executive committee (NEC) to endorse the party’s national working committee’s decision to accept Zuma’s apology on Nkandla.

The ANC’s deputy secretary general, Jessie Duarte, dismissed claims by Mapaila that the ANC is being controlled by a faction and that the SACP is being sidelined.

“If SACP is making allegations, they must be able to do so in a bilateral with the ANC, not through the media. As far as I know, they are the ones who were supposed to have a bilateral [meeting] with us two weeks ago. They said that they were not available. Then the president [of the ANC, Zuma] was not available and they said they do not want a meeting in his absence,” Duarte said.

The ANC’s spokesperson, Zizi Kodwa, agreed with Duarte and suggested that the SACP is trying to dictate to the ANC.

“We make our interpretations independently. We would have thought the SACP would have had a bilateral with the ANC before ventilating [their grievances] in public,” he said.

“We reject that observation [that the decision to abandon the investigation of state capture] was factional. It is a decision of the NEC, not a faction.”

Kodwa added the ANC is committed to meeting the SACP as soon as Nzimande is back in the country.

The communist party, which at one point was regarded as one of the staunchest supporters of Zuma, also accused him and his friends of using state institutions and resources to target individuals who are critical of his leadership.

The SACP drew parallels between the current developments with events that took place in the lead-up to the ANC’s national general council in Polokwane in 2007, where Thabo Mbeki, then president, was accused of employing state intelligence institutions to destabilise his opponents.

“Zuma should know better because this was done against him. Now he is using the same tactics,” said Mapaila.

He said the SACP was convinced the Hawks boss, Berning Ntlemeza, is using the unit to settle political scores and is trying to intimidate communists by using what he described as “apartheid intelligence tactics” to deal with opponents.

The Hawks have dismissed the allegations.

Nzimande said there is no contradiction in criticising the ANC while still voting for it but warned that the results of factionalism will show at the polls.

“Our people will punish us. We must never take voters for granted; they are not stupid,” he said.

Online submissions make IEC’s job easier
The Independent Electoral Commission (IEC) has commended the majority political parties for embracing the use of technology after all the major ones, except the Economic Freedom Fighters (EFF), submitted their candidate lists for the August local elections online.

The deadline for the submission of candidate lists was 5pm on Thursday.

Hours before the deadline, the ANC was still trying to resolve several disputes involving party members openly revolting against leaders imposing candidates on them. Even as the deadline passed, a small group of ANC members was protesting outside the party’s Johannesburg headquarters over what they said were irregularities in the party’s list.

But technology kept such protests far away from the offices of the IEC. Its spokesperson, Kate Bapela, said the newly implemented system had helped to avoid the long queues and much paperwork that had characterised the process in previous years when parties physically submitted their lists.

Bapela said the online process had gone smoothly and most of the party representatives found it user-friendly.

“All the major parties, like the DA [Democratic Alliance] and the ANC, have selected to submit their candidates online, which is great,” said Bapela.

The EFF’s national spokesperson, Mbuyiseni Ndlozi, said the party wanted to minimise potential mistakes and had opted to make its submissions manually.

Just before the Mail & Guardian went to print, the ANC spokesperson, Zizi Kodwa, said the party was working hard to meet the deadline.