Situation in the ANC normal, all fouled up 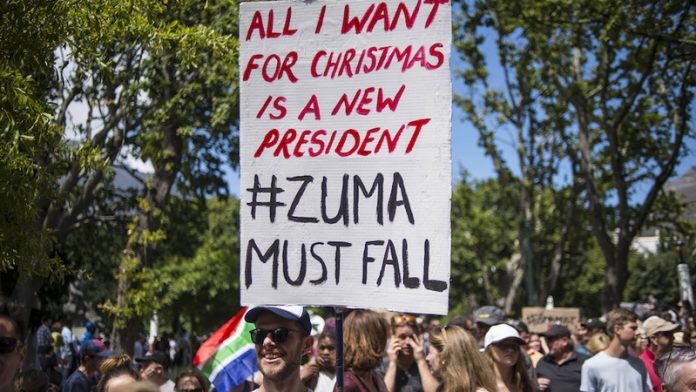 The interesting question about the current political crisis is whether the public can benefit from it.

The basic issue is about continuing, or accelerating, the process of wealth redistribution from poor to rich. That means ensuring the ruling class keeps, or expands, its hold over the government.

If the ruling class can use its wealth and political power to get rid of President Jacob Zuma with no reference to any democratic mandate, then this ought to enhance its control; if it can replace Zuma with a corporate toady such as Deputy President Cyril Ramaphosa, this ought to accelerate the enrichment of the 0.01%. Everything else, to the ruling class, would be mere collateral damage.

There is no urgency with regard to getting rid of Zuma. He has been in power for nine years and has done the damage he was put in power to do.

The pretence of urgency is a ploy to manipulate people into supporting the ruling class campaign to remove Zuma. As the Economic Freedom Fighters (EFF), but nobody else, recently pointed out, removing Zuma is meaningless unless one changes the exploitative and antidemocratic system for which he has worked. Many in leadership positions in the ANC stand for the same destructive policies, and many of these are fronting for the anti-Zuma campaign.

If Zuma is removed, this might split the ANC, which might be mildly beneficial for the EFF, which would probably pick up some support, but Zuma’s actual supporters are mainly rightwingers who might decamp to form a conservative party along the lines of the African Christian Democratic Party – and others would just join the Democratic Alliance. This would benefit the neoliberals more than anyone else. Pretending that such chaos would help the country is foolishness worthy of the gibberish modern Trotskyites spout.

What would challenge the ruling class agenda? The answer must be sought in what the ruling class seems to want to avoid – a meaningful democratic debate about the state of the nation and the policies needed to rescue it from its current conditions.

Such a debate could not happen in the stagnant air of a national executive committee meeting called to decide whether to establish a special national conference to determine whether Zuma should be removed. Nor would such a debate be likely at such a conference.

It is true that the way in which delegates are bribed and bullied, and credentials faked and votes rigged, means that any ANC national conference these days is suspect. Yet such a special conference, with its personalised agenda and the suicidal nature of any decision to recall Zuma, which even ANC secretary general Gwede Mantashe has pointed out, would be particularly impervious to rational or productive debate. Besides, such a conference would simply and blindly reaffirm Zuma’s position.

There could be a real debate if Nkosazana Dlamini-Zuma, the outgoing chair of the African Union Commission, gets enough support to become a serious contender at the 2017 national conference.

It might seem that the choice between Dlamini-Zuma and Ramaphosa is a choice between two evils, because both are conservatives with close ties to multinational interests of one sort or another.

Dlamini-Zuma, however, is less wedded to corporate interests than Ramaphosa, and thus might be interested in promoting the interests of the country rather than the 0.01%.

Because Ramaphosa would have the money behind him, Dlamini-Zuma’s only hope of establishing an alternative power base would be an appeal to the public, which would require some kind of promise to roll back neoliberalism.

This would lead to a public debate that could be made use of by what little remains of the South African left, both to publicise issues suppressed by the ruling class, and to promote leftist agendas in the ANC. The precedent of Polokwane is dire, but the circumstances are not the same and there is no longer so much of a danger that people will follow fraudsters such as former Cosatu leader Zwelinzima Vavi and Blade Nzimande, higher education minister, to their doom.

It is surely for this reason that the ruling class wants “the ANC” – by which they mean the ANC leaders whom they have suborned – to “remove Zuma”, despite the fact that this is against the ANC’s constitution and probably against the national Constitution as well. It remains to be seen whether the ruling class will succeed, but they are pursuing a dangerous and destructive game, which displays their greed and their irresponsibility.