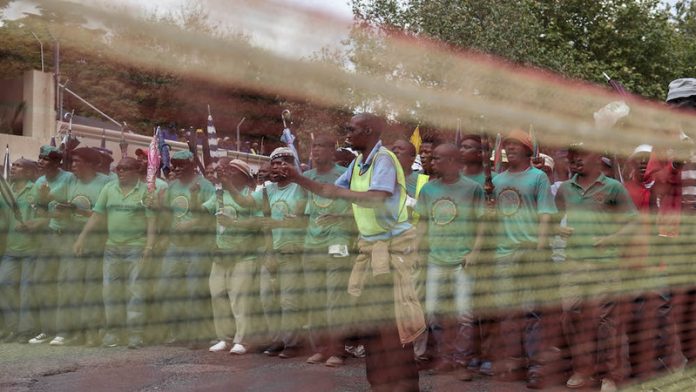 The startling claim that a former Lonmin Platinum employee doubled as a state spy in 2012 has caused a wave of distrust to wash over the platinum sector as it heads into wage negotiations.

Workers and their employers are due to start talks next month to update a three-year wage agreement reached in the aftermath of the Marikana massacre.

The workers say the suspicion that spies were actively manipulating their sector changes everything. The companies say it changes nothing.

On Sunday, Rapport carried the news that the former Lonmin human resources head, Bernard Mokwena, had been on the payroll of the State Security Agency (SSA) while he negotiated – or refused to negotiate – with workers in the days before the massacre. Mokwena has denied ever being employed as an agent or being linked to the alleged funding of a splinter union, the Workers’ Association Union, to slow the rise of the Association of Mineworkers and Construction Union (Amcu).

Amcu’s president, Joseph Mathunjwa, said the allegations raised all manner of questions, including of third-force manipulation. “Who can rule out that even the killing of the 10 people before the main massacre was instituted by Mokwena and the state apparatus in order to make workers seem violent?” he asked. Police killed 34 workers at Marikana in 2012. Ten others were murdered in what was believed to be an escalation of violence between supporters of the National Union of Mineworkers (NUM) and Amcu.

A former Amcu workers’ committee organiser, Thebe Maswabi, approached the courts last year, claiming he was instructed by President Jacob Zuma to set up the Workers’ Association Union to draw members away from Amcu.

Lonmin’s spokesperson, Sue Vei, said the allegations that Mokwena was a spy had no merit and would not affect the wage negotiations. “We believe the allegations are untrue and we have no other knowledge of the matter, so I wouldn’t expect it to have any impact,” she said.

Mokwena resigned from the company in December 2014. The NUM said it believes the allegations about spies operating in the platinum belt are part of a plot to destabilise unions.

“I expect that that union was set up to destroy Amcu but ended up taking NUM members,” the union’s deputy general secretary, William Mabapa, said. “It had an impact on us as a trade union. To me, there are more revelations to come.”

The metalworkers’ union Numsa has been making significant inroads at mines in the North West with the recruitment of semiskilled workers and will also take part in this year’s wage talks. It said claims that Mokwena was a spy merits a full investigation. “It is definitely going to bedevil any relationship the union will have with a company like that,” said Karl Cloete, Numsa’s deputy general secretary.

The president of the National Council of Trade Unions, Joseph Maqhekeni, who negotiated on behalf of workers after the violence in 2012, said the wage talks would be haunted by reminders of the apartheid regime’s influence.

“It’s not surprising to hear about SSA agents in the negotiating chamber. In the previous regime, the government gave advice to the private sector about how to deal with workers. Those people are still with us in the industry and their hearts have not changed,” Maqhekeni said.

The Chamber of Mines said it was not aware of spy allegations and it did not believe the relations between the companies and workers on the platinum belt would be soured.