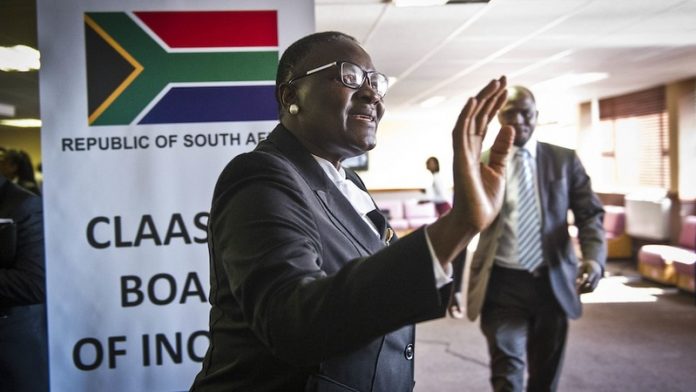 Public hearings by the Claassen board of inquiry appointed by President Jacob Zuma to probe Riah Phiyega’s fitness for office, were concluded on Friday, paving the way for the three-member panel to ponder the fate of suspended national police commissioner.

“We will await further submissions in writing and we will then consider our views. We will then draft the report which will be made available to everybody. I want to thank all of you for the hard work that the legal teams have put in,” chairperson of the inquiry, Judge Neels Claassen addressed different legal teams and Phiyega in Centurion.

Claassen made the concluding remarks after Phiyega’s counsel presented their closing arguments.

Advocate William Mokhari SC, for Phiyega appealed to the board to acquit his embattled client, when they make the final recommendation to Zuma.

“There are quite a number of options which are set out. You can say no action be taken against her, or you can recommend things like reduction of her salary, or that she be transferred to another department… so you have a whole lot of options,” said Mokhari.

Mokhari submitted that in public service regulations, as promulgated in the Public Service Act, Phiyega and the police service, were not bound by the protocols which apply to other civil servants.

“We know that within the public administration, there is a public service. What the public service (act) didn’t tell us about is that the police are part of the public service, and we say they are not. That is why you find the police under chapter 11 of the Constitution. Now we know the Public Service Act is not applicable to her terms and conditions, even the SA Police Service regulations are not applicable to her because she is the one who must actually implement them. In terms of SAPS regulations she is the employer,” said Mokhari.

“The evidence leaders contention that she has breached the Public Service Act and therefore she must be held accountable, is completely misplaced.”

Mokhari criticised the evidence of former police brigadier Lindela Mashigo, who told the inquiry last month that he made changes to the SAPS media statement issued after the Marikana shooting at the insistence of Phiyega.

“They (the alterations) were dictated… by the national commissioner.”

Mashigo said Phiyega dictated to him that the events at Marikana should not be relayed to the media, at a briefing on August 17, 2012, as two scenes, but rather a single occurrence in which the miners were shot and killed.

“The changes that were dictated… the first is not differentiating between the two scenes (where the miners were shot). As you will see in the media statement, that was not captured. There was no scene 1 and scene 2,” said Mashigo.

On Friday, Mokhari said Mashigo had lied in his testimony in May.

“This is a witness who just came here to give an untruth, a blatant lie, to this board. The evidence of Mashigo must be completely rejected. If this board were to scrutinise the evidence of Mashigo and his statement of May, and read it together with the statement of Adriao (Dennis Adriao, another former SAPS spokesperson), you would think these people were not together. Their statements are mutually destructive,” said Mokhari.

He said Mashigo, now Tshwane municipality spokesperson, testified in a bid to clear his name.

“The evidence of Mashigo was so hopelessly inaccurate. We know the motive of his coming here. He didn’t come here to assist this board. He came to clear his own name,” said Mokhari.

Phiyega is facing questions over her role as national police chief in the deadly Marikana unrest, where 34 people, mostly striking mineworkers from the Lonmin mine, were fatally shot in a clash with police on August 16, 2012.

More than 70 people were wounded, and 250 were arrested at the company’s platinum mining operations in Marikana, near Rustenburg. In the preceding week, 10 people, including two policemen and two Lonmin security guards, were killed in the strike-related violence.

Zuma set up the Claassen board of inquiry into Phiyega’s fitness to hold office in September, in line with recommendations by the Farlam Commission.

Phiyega’s actions prior to and on the day of the August 16 shooting, believed to be the biggest loss of life in a single police operation in post-apartheid South Africa, was heavily criticised by the Farlam Commission of inquiry.

In June last year, Zuma released the report of the Farlam Commission. It recommended a board of inquiry look into Phiyega’s fitness to hold office after finding fault with the police’s “tactical” plan to deal with the striking miners.

The Farlam Commission also found the police had misled it about its plans on the day of the deadly shootings.

Claassen chairs the three-member board, assisted by advocates Bernard Khuzwayo and Anusha Rawjee. The panel is expected to submit recommendations to Zuma in August.