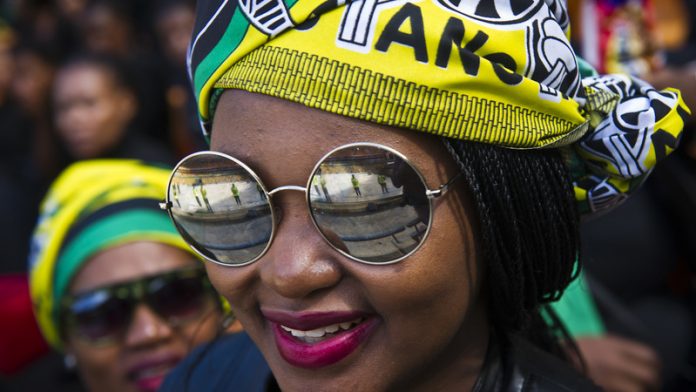 Thunderous cheering, screaming, and singing echoed in the Mbombela Stadium in Nelspruit on Sunday afternoon as President Jacob Zuma arrived for the launch of the ANC’s Mpumalanga August 3 municipal elections manifesto.

Accompanied by Mpumalanga premier and provincial ANC chairperson David Mabuza, Zuma walked around the turf waving his flat cap at supporters. He was escorted by a large contingent of bodyguards and ANC marshals.

Zuma took his seat near the podium shortly before 1pm. The 41 000-seat stadium was nearly full when Zuma arrived.

Teenage ANC supporters Tracy Nhlengwa, 16, and Sthembiso Mabasa, 19, said they had looked forward to the Mpumalanga launch for months now.

“We want the ANC to stay in control here. That is very important because it means equality will continue for everyone. We support the party of our parents,” said Nhlengwa.

Mabasa said as a university student she believed the future of young professionals was secure under ANC guard.

“This is the party of Nelson Mandela. Madiba taught us that education is the key to emancipation. So we are here to honour his legacy. Our future lies in the ANC,” she said.

Mpumalanga premier Mabuza said groundwork had been intensively done in the province and the party was hoping for a 90 percent victory in the tightly-contested August 3 local government elections.

Limpopo
About 20 000 ANC supporters converged on the Monsterlus Stadium in Sekhukhune for the launch of the ANC’s Limpopo municipal elections manifesto on Sunday.

Limpopo ANC chairperson Stan Mathabatha’s spokesman Kenny Mathiva said the rally organisers were happy with the attendance and the expected number of supporters had arrived.

“Of about 300 buses organised, which carries about 70 passengers each, 273 of them have already arrived full to capacity, giving us an estimate of 19,110 already in the stadium. We have managed to reach our 20 000 target to fill up the 15 000 capacity stadium. This clearly means that our mobilisation drive to promote this event has worked perfectly. Now that chairperson Mathabatha would be launching the Limpopo ANC local elections volunteers brigade the road is leading to 3 August,” he said.

Mathabatha and ANC treasurer general Zweli Mkhize were expected to launch the 5 000-strong Limpopo “Mark Shope volunteer brigade” which would mobilise and convince voters to support the ANC in the local government elections.

ANC supporters gathered in their numbers to listen to the ANC Gauteng branch’s elections manifesto launch at the FNB stadium on June 4, 2016. (Delwyn Verasamy, M&G)

Gauteng
Meanwhile, on Saturday, more than 80 000 supporters packed the gigantic FNB Stadium in Johannesburg for the Gauteng ANC manifesto launch

Read more: ‘The ANC is the leader of society’, says Zuma

The crowd cheered as Zuma made his way into the stadium, singing songs as he walked around the field waving at them. The crowd appeared to be unfazed that the programme had been delayed by at least three hours after it had been officially set to begin at 11am.

However, many people began leaving the stadium before Zuma started speaking after the main speaker of the day Gauteng ANC chairman Paul Mashatile had finished his speech. – African News Agency (ANA); Edited by Michelle Solomon