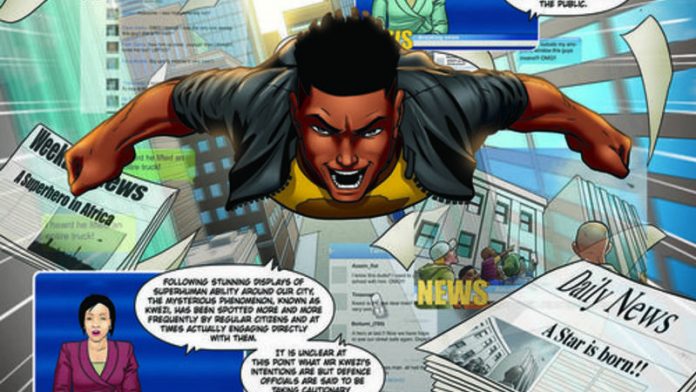 If comic lovers and superhero fanatics have been praying for a South African comic book that looks, sounds and to some degree acts like something they are familiar with, then Kwezi is here to heed their calls.

In its marvellous first series that includes three editions, readers meet Kwezi, a flying superhero who busts crime in the fictional Gold City while trying to balance these newfound skills with his life as a regular guy who lives in a modest one-room dwelling away from the city’s glamorous high-rises.

After almost breaking the internet when people find out about his powers, he learns that his superhero status isn’t just for getting girls and trending on Twitter – it’s about fulfilling a responsibility given to him by his ancestors, the Star People.

Guided by the great Mohale, and with the help of Mohale’s right- and left-hand superheroes, Azania and Khoi, Kwezi reluctantly returns home to what looks like the former Transkei, to consult elders and ancestors as an act of accepting his great mission.

Series creator and illustrator Loyiso Mkize is a 29-year-old from Butterworth who cut his teeth illustrating the very popular Supa Strikers series. The writing reads easily and is very localised, peppered with slang, isiXhosa, isiZulu and Sesotho, but could do with a more thorough editor’s eye.

The first book of this series, published by David Philip Publishers, is available at major bookstores for R96 and is begging to be read between the bed sheets by a teenager this winter.