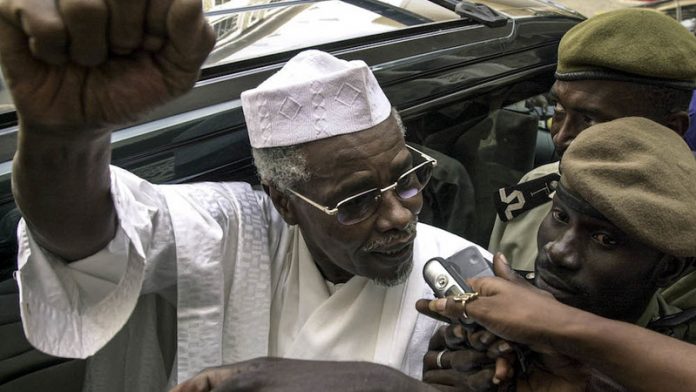 It was a bright, clear morning in Dakar the day the much anticipated Habré judgment was to be delivered. Hundreds of people were pushing to get into the Palace of Justice. People lined up to be seated by ushers. The historic judgment was about to start.

The mood turned solemn as presiding Judge Gberdao Gustave Kam of Burkina Faso introduced the parties for the prosecution and defence. He then read out the charges – a long catalogue of crimes including torture, war crimes, crimes against humanity and sexual slavery during Habré’s rule in Chad between 1982 and 1990.

The former dictator sat in the defendant’s chair on the judge’s right. He was clothed as he was throughout the trial, in white robes and a turban covering most of his face. Incongruously, he wore sunglasses.

Everything about the Habré trial was out of the ordinary. The case was heard by a special, extraordinary chamber created in the Senegalese justice system under an agreement between the Senagalese government and the African Union. The fact that the trial was endorsed by the AU counters continuous criticism that African states have no appetite for prosecuting international crimes.

The Habré court sat for 56 days and heard the testimony of 93 witnesses. As war crimes trials go, this was remarkably swift and efficient.

The judge said Habre’s direct knowledge of the crimes committed during his reign of terror was significant; personal knowledge is so often disputed by heads of states.

Habré raped one victim four times in the presidential compound, removing all doubt of the extent of his personal knowledge of sexual crimes. Not only did he authorise the establishment of a network of prisons, he also participated in the interrogation of prisoners, including the torture of such prisoners. The court found Habré’s contribution “essential and decisive”; he was the “chief organiser at the central level”.

Some victims said Habré knew exactly how to administer various forms of torture and the crucial point at which to stop the torture – just short of the victim’s death.

The BBC reported that an underground prison, known as the Piscine (swimming pool), was one of the notorious detention centres in Chad’s capital, N’Djamena. Victims who escaped said the most common forms of torture were electric shocks, near-asphyxia and having gas squirted into their eyes. “Some detainees were placed in a room with decomposing bodies. Others were left to die from hunger from the diète noire [starvation diet].”

The court proceedings were in French but there were no translation services, excluding an immediate wider audience.

After convicting Habré of war crimes, crimes against humanity and torture, the judge proceeded to sentencing: life imprisonment, the sentence requested by prosecutor Mbacke Fall. The judge discussed aggravating and mitigating circumstances. Habré never showed any remorse. He did not respect or co-operate with the court. The only mitigating circumstance was that Habré was a good father.

After the sentence was announced, Habré’s victims started cheering and ululating, breaking the severity of the court proceedings. For them this was the end of a 25-year struggle for justice.

As Habré was taken away he turned around and waved, shouting: “Down with French colonialism.”

Habré was initially supported by the United States and France in their attempts to constrain the influence of Libyan leader Muammar Gaddafi. Human Rights Watch, a pivotal player in the success of the case, is preparing a report on US and French complicity during Habré’s rule.

The trial had come full circle. On the first day of his trial he shouted: “Down with the new colonialism.”

The action shifted to a hotel, the Novotel Dakar, where a conference on the universal jurisdiction and the Habré trial was underway. Reed Brody, the lead counsel for the victims, spoke to the international media. The judgment was unpicked.

One of the reasons the trial excited interest that is it is a unique display of the exercise of universal jurisdiction. It is also a powerful expression of the idea that international crimes should, in the first instance, be tried by domestic courts. This principle is also known as complementarity.

Many argue that the Habré-style trial constitutes the future of international criminal justice. Uganda has a similar style chamber in its high court with the jurisdiction to hear war crimes, genocide and crimes against humanity.

The idea that accused should be moved to The Hague to be tried far from the scenes of the crimes has been criticised. The public interest in the Habré trial in Senegal is but one illustration of the importance of trying international crimes as close as possible to where they were committed.

The fact that Habré was convicted in his adopted city of Dakar is of symbolic importance. This is the city that sheltered and shielded him for 25 years after he fled to Senegal in 1990. It is fitting that he was convicted on West African soil in the glaring sun and not in the grey, bland war crimes trial capital of The Hague. Much will be said and written about the ripple effects of the Habré trial.

The elephantine and exorbitantly expensive United Nations tribunals have a lot to learn from the way this trial was conducted. Habre’s trial not only tested the waters, it might just represent a turning of the tide.