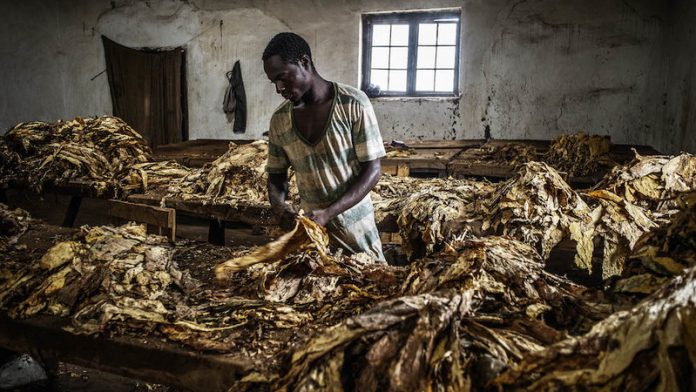 He doesn’t smoke but Erisa Chisenga will have absorbed as much nicotine as a chain-smoker by the end of the day. It’s harvest season and the tobacco plants are shoulder high in his field. He plucks it leaf by leaf until nothing but the stems remain.

Every day he works in his 100 square metre field. He entered the industry five years ago hoping for a better life for himself, his wife and five children.

But the side effects of working the crop are not Chisenga’s only problem. He is one of 400 000 tobacco farmers in Malawi, the world’s most tobacco-dependent country. Seventy-five percent of the population relies directly or indirectly on the tawny leaf. He is under contract to Alliance One, one of the world’s largest raw tobacco merchants. Its main customers are Philip Morris and British American Tobacco.

The farmers receive all their requirements for cultivation on credit. The tricky part comes when they have to pay back their loans. Fluctuations in the local currency against the dollar and high labour costs eat into their profits. Only once in five years of growing tobacco has Chisenga made a small profit.

Minister of Finance Goodall Gondwe says tobacco is a “highly political” industry and the country needs to break its dependency on it.

“The times of tobacco are doomed,” Gondwe says, referring to the steady drop in global consumption because of the anti-smoking lobby, which has made buyers more selective and has led to a decline in orders for the Malawian product.

The nongovernmental organisation Unfair Tobacco estimates that food grown on Malawi’s tobacco farms could feed 750 000 people. Paradoxically, one of the key aid initiatives to diversify agriculture and promote food security is working with the tobacco industry.

The goal of the New Alliance for Food Security and Nutrition (NAFSN) — initiated in 2012 by the G8, a club of the world’s wealthiest industrial nations — is to lift 50-million people out of poverty in 11 African countries in 10 years through public private partnerships.

It brings together the G8 and a who’s who of multinational business, including Nestlé, Heineken, Coca-Cola, Bayer, Syngenta, Monsanto and Standard Bank. Together they plan to invest more than $11-billion until 2022. In Malawi, the initiative is intended to help 1.7-million people, a tenth of the population.

But among the companies party to the initiative in Malawi are Alliance One and Limbe Leaf, a subsidiary of Universal Corporation, another global tobacco giant. Together these companies buy and process up to 90% of Malawi’s annual tobacco harvest.

In co-operation with the NAFSN, they want to expand their business. Alliance One wants to fund private tobacco research and to acquire more land, doubling its estates from 61 000 hectares to 121 000 hactares. Ronald Ngwira, the leaf production manager of Alliance One, argues that the solution is “[agricultural] diversification with tobacco. Are we a tobacco company or are we a food company?” he asks.

He says the company provides farmers with seed, fertiliser and pesticide — which they are expected to pay for after selling their crop — to grow maize and tobacco.

Malawi and the European Union are jointly responsible for implementing the initiative. But the German EU delegate, Maria Heubuch, of the Greens party, recently called on the EU to halt its support of the NAFSN in Malawi, arguing that co-operation with the tobacco companies is one of the initiative’s “worst failings”.

Heubuch sharply questions the ability of giant public-private partnership schemes such as the NAFSN to help reduce poverty and food security. She says the poorest bear the brunt of the social and environmental risks associated with it.

She describes the NAFSN as “a door opener for multinationals” and says the companies’ business practices are opaque. Their “letters of intent” were not made accessible to the public or delegates of the European Parliament, such as herself, making it hard to keep track of their investments.

In some cases, the companies’ initial intention to support local people has changed into something else. One example is Mpatsa Farms, where the aim was to grow rice, cotton, soya and maize under the NAFSN, which later “stopped and channelled resources to tobacco farming”, according to its 2014 progress report.

The German government continues to support the initiative, injecting €500-million into it in 2013, and has assigned the Association for International Co-operation (GIZ) to help wean Malawian farmers off growing tobacco.

The GIZ regards itself as a partner of the private sector, with its Malawian director, Matthias Rompel, saying that “agriculture needs to become agribusiness. We can help the economy without having to deal too much with the government.”

The GIZ is about to set up a “green innovation centre” at the Agriculture Research and Extension Trust (Aret), which was founded by the Malawian government and the Tobacco Association of Malawi to develop new tobacco strains and to teach farmers how to grow tobacco.

Rompel insists the GIZ is not working with the tobacco industry, and the government has designated Aret as a core institution to implement its new national export strategy, which encourages farmers to grow oil seed crops. The trust is also committed to the “diversification strategic plan” to develop alternatives to tobacco.

But doubts persist. The trust’s “key consultations” with representatives of various industries included talks with Japan Tobacco International, Limbe Leaf and Alliance One.

Against this background, Laura Graen, of Unfair Tobacco, says “the tobacco industry has hijacked the term diversification and recoined it for its own purposes”.

Aret itself lists among the weaknesses of its diversification efforts that a bias towards “tobacco will negatively affect the efforts to actively engage itself on other high-value crops”.

Tobacco is central to Aret’s finances; Malawi’s tobacco farmers are required to contribute 1% of their income to Aret. Its diversification plan identifies overdependence on the tobacco levy as another weakness.

A document dealing with the GIZ’s co-operation with Aret bluntly states that it “is financed by tobacco sales”.

In a poor country with persistent budgetary woes, there are no easy alternatives. “Sourcing funds for research and extension in tobacco from most traditional funding agencies is almost impossible,” according to the diversification strategy.

Last year, the GIZ invested €140 000 in Aret and it plans to invest another €200 000 in it this year. Originally intended to end next year, the support programme is to be extended until 2019.  A large amount of the money, according to GIZ statistics, has so far been used to train only two of Aret’s 40 staff members in how to grow oilseed crops.

Chisenga agrees that it would be better to grow something other than tobacco but adds: “What we need is cash.”

This year, Alliance One paid Chisenga $1/kg for his tobacco harvest. Chisenga did not make a profit and he could not repay the loan.

With the substitution programme struggling to take off, tobacco remains his best bet. Somehow, he will have to survive until next season.

This article was produced by the Centre for Investigative Journalism Malawi.

Collins Mtika
Collins Mtika works from Mzuzu, Malawi. COLLINS MTIKA is a Malawian investigative journalist. He is the Malawi Correspondent for RSA based pan African weekly newspaper called the African Independent. Collins Mtika has over 110 followers on Twitter.