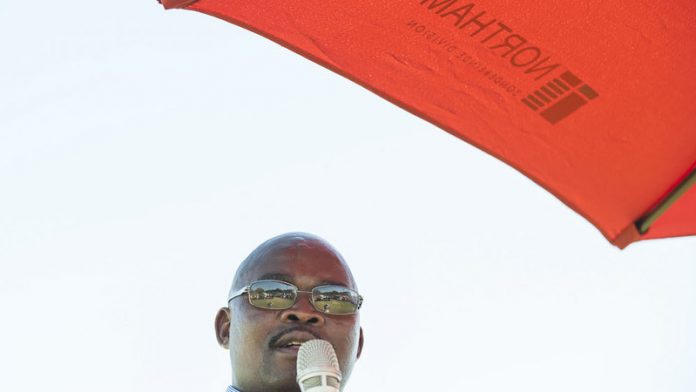 Mthetheleli Somaxhama had just finished an afternoon of grocery shopping in Northam’s commercial district with a female friend, on the first Sunday in June. As they waited for a lift to take them back to the platinum miner’s Zondereinde hostel about 20km away, a man approached them.

This prompted no panic. The four-way stop is a favourite spot among local hitchhikers in need of a ride. But this was not someone looking to pass the time until the next car passed in this remote Limpopo mining town. The man shot Somaxhama, a 45-year-old stope machine operator, in the head. He died at the scene as the gunman escaped on foot. Somaxhama’s friend was unharmed.

When news of Somaxhama’s murder reached the Zondereinde hostels, workers belonging to the National Union of Mineworkers (NUM) were up in arms. The union’s members dominate the hostels and make up 80% of Northam Platinum’s 7 000-strong workforce.

They immediately blamed the rival Association of Mineworkers and Construction Union (Amcu) for the killing. Less than three hours later, as the night shift reported for duty, workers were told that Amcu had assassinated Somaxhama, who was considered a leader in the hostels after 13 years at the platinum mine.

That night, an Amcu member working at Anglo Platinum’s neighbouring Dishaba mine was assaulted and admitted to hospital. His car was also torched. Outrage spread through the workforce, and operations were halted the next day.

Early on Monday morning, while the mine’s management considered how to respond to the murder, hundreds of NUM members gathered at an intersection on the main road leading to the Zondereinde mine, some carrying machetes and knobkerries. The workers who belong to Amcu were not part of this protest. They were told by the mine’s employee relations specialist not to report for duty, and instead await further instructions from their line managers at the company’s boom gate, not far from the protest.

Positioned within sight and easy reach of one another, it was not long before the two groups came to blows.

Among the Amcu members waiting at the entrance, dressed in the union’s traditional green T-shirt, was 52-year-old Thembinkosi Mhlabeni, who had also worked as a stope machine operator at the mine for more than 10 years. He was hacked to death. One of the workers who witnessed the attack said Mhlabeni tried to escape the clash. He managed to get 200m away before being cornered by a group of men and fatally stabbed in his upper body.

Somaxhama and Mhlabeni were not the first employees of Northam Platinum to die in what appears to be clashes between unions. Last year five other NUM members, who were also hostel residents, were killed in what the company described as “isolated criminal incidents”.

But the genesis of the violence can be traced back to January 2014. That was when the hostel rooms of workers affiliated to Amcu were trashed and their possessions destroyed. That, in turn, followed the 2013 NUM march on Northam Platinum offices, when the union accused the company’s chief executive of helping Amcu recruit members from its own ranks.

That there would be trouble down the line was already clear back then.

Northam’s management took what seemed like a proactive decision, but which in hindsight has been blamed at least in part for the subsequent deaths. The company advised Amcu members to move out of the hostels for their own safety, offering them a “sleeping-out allowance” to seek accommodation elsewhere.

The two unions agree on little, but both sides believe this set the scene for murder.  “Immediately after they received a sleep-out allowance, the killings of our members started,” the NUM’s regional secretary in the area, Richard Mahoa, told the Mail & Guardian this week.

Amcu president Joseph Mathunjwa also believes the decision to move his members out of the hostels divided workers along union lines.

“Those identified as Amcu had to leave [the hostels]. The violence started with that decision. The only conclusion we can draw is that management created two tiers of employees within one company, hence it was easy for the NUM to blame Amcu for the killings,” he said.

Most of the hostel residents affiliated to Amcu sought alternative accommodation in an adjacent informal settlement and in government-built houses in nearby Mojuta. The informal settlement has now become a no-go area for its members, the NUM claims.

“There is no electricity or lights outside. Once NUM members go there, they may be shot or killed,” Mahoa said.

This week’s news of the arrest of four people for public violence, and one for the murder of Mhlabeni, has raised hopes that the killers of five other NUM members last year will be brought to justice.

Despite the simmering tensions that boiled over last week, the mine believes it is irrational to attribute the violent clashes to the hostel tensions.

“The hostel incident is all rather ancient history. As far as relating what happened in 2014 to the current violence, that’s unhelpful,” said Northam Platinum spokesperson Marion Brower. While the investigations into the killings continue, the NUM said it anticipates more violence. It intends to fight back.

“If there is nobody next to me and an Amcu guy or whoever attacks me, I must defend myself,” said Mahoa. “We cannot wait for the police. That’s what we have decided, because it seems they are a law unto themselves.”

Amcu’s Mathunjwa believes the violence and tensions in the hostels forms part of the NUM’s attempt to retain its status as majority union at the Zondereinde mine.

“At Anglo Platinum’s Tumela, Dishaba, Union and Swartklip mines, we’ve got NUM members and there’s nothing going on,” Mathunjwa said. “We are the majority [there] and never ill-treated NUM members. At Northam, it’s questionable.

“So we asked minister [Mosebenzi] Zwane for a commission of inquiry to establish why Amcu is not welcome at that mine, and why the management gave NUM members the right to live in the hostels alone.”

They did the same job: operating machinery at the mine’s stope face underground, where platinum is extracted from the rock. For this, they were each paid about R10 000 a month. Both were active in organising their fellow workers: one as the deputy chair of a hostel committee, the other as what colleagues described as one of the most loyal union members at the mine.

This week, workers at Northam Platinum who had gathered for Somaxhama’s memorial service said the two dead men were once good friends — as many migrant workers from the Eastern Cape often are.

Despite the mine being in a predominantly Setswana-speaking area, most of the 600 workers attending Somaxhama’s memorial service spoke in isiXhosa and said they would accompany his body to the former Transkei, where he will be buried.

Addressing the service held at the mine’s stadium, Somaxhama’s brother said they had both been warned they were in the firing line.

“We are praying for this violence to stop, but we know this is not over,” Mthanjelwa Ndziba said from the podium.

He appealed to fellow Eastern Cape workers to keep the peace, urging them to consider how much unites Amcu and NUM supporters.

“Even if you are not NUM, you are also from Eastern Cape. We come from far away to work, away from our families. Why must we kill each other when we arrive here at the mine? The family at home wants us to meet, as migrant workers, and resolve the fight,” he said.

The tensions between rival unions that seemingly started between NUM and Amcu members in the mine’s hostels are now also affecting nonunionised members.

Northam Platinum’s Ncedisa Maqoma said she hopes employee relations at the mine will be mended in the aftermath of the killings.

The men’s bodies will both be transported from the mine to the Eastern Cape by road. Though they will follow the same route, the two former friends will make their last journeys in two separate convoys: one led by the NUM, the other by Amcu. — Govan Whittles

Usher’s ‘My Way’ turns 25 this year. We count some of our favourite songs from the R&B superstar
Africa